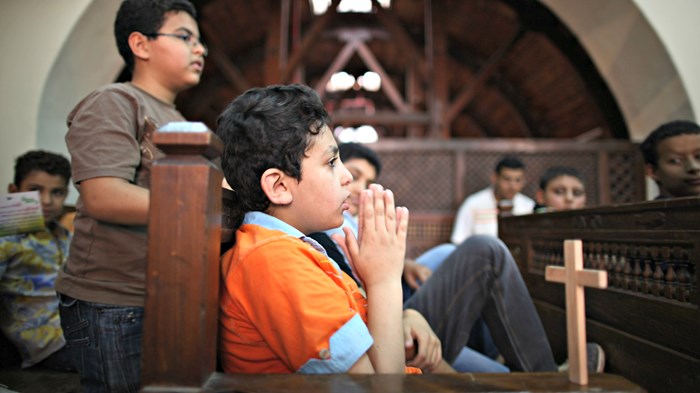 Four years ago, Shenouda was an infant found at the door of a Coptic church. Today, renamed Yusuf, the boy is found in a state-run orphanage. In between lies the care of a priest, the devastation of a Christian family, and a sectarian bureaucracy undergoing partial reform.

Egypt is home to a Dickens-like tragedy.

“Adoption is not legal in Egypt,” said Nermien Riad, executive director of Coptic Orphans. “There is no possibility it will happen as known in the Western world.”

The boy’s family name and location have been kept anonymous as a cautionary measure, as reported by the Coptic publication Watani. Likely left by an unwed mother, the child was found by a Coptic priest who presented him to the couple, infertile for 29 years.

They took him into their home, obtained a birth certificate as if he was their own, and raised him with love and devotion. They gave him a Christian-signifying first name, honoring the prior Coptic Orthodox pope, and per Egyptian naming custom the four-generation quadrilateral was completed with the names of the doting father, grandfather, and great-grandfather.

All was idyllic, until a jealous niece realized the impact on her inheritance.

Egypt’s Islamic-based law, seeking to preserve lineage, prohibits taking another’s child as one’s own. The niece reported the couple to the police, who investigated. The prosecution determined there was no blood relation, but also no ill will.

The father signed a paper stating he found the child “on the street,” likely to shield the priest’s involvement. But though the case was dropped last February, the boy was taken to an orphanage. With no papers to prove his ancestry, he was assumed to be a Muslim—and thus forbidden to live with a Christian family—and given the religiously neutral name Yusuf, the Arabic equivalent of Joseph.

The desperate parents protested: What Muslim would leave their unwanted child at a church? Denied, they were even forbidden from visiting him in the orphanage. Their applications for employment at the facility were turned down.

According to the Ministry of Social Solidarity, Egypt has 11,000 children in institutional care. According to a 2016 study by UNICEF, the United Nations agency for children, the total number of Egyptian children with at least one parent dead is 1.2 million.

Not all of them have a sad ending.

“It turned out better than I could’ve ever hoped for,” said Rasha Mekki, who discovered Egypt’s kafala program in her mid-40s following 20 years of IVF treatments. She visited orphanages over the course of a month, filled out the government paperwork, and came home with Mostafa.

Today, Mekki lives with her husband and not-quite-son in San Francisco where she runs Yalla Kafala, a nonprofit founded in 2020 to promote “adoption” in Egypt. Its goal is an orphan-free Egypt by 2030.

She is less ambitious than the Egyptian government, which set 2025 as its target date to close all orphanages in the nation due to widespread child abuse, neglect, and overcrowding. Reforms in 2020 allowed single, divorced, and unmarried women over the age of 30 to apply for kafala, and lowered the level of education necessary to one spouse holding a high school diploma.

Last year, further reforms allowed a partial name change. After consulting with the Cairo-based al-Azhar, the foremost center of scholarship in the Sunni Muslim world, the Egyptian government permitted sponsoring parents to give the child the father’s name in the second position of the quadrilateral, or the family name in the fourth position—but not both designations.

Combined with a storyline on kafala by the popular “Why Not?” Egyptian miniseries, applications surged to 2,700 in 2021, the highest number ever. Yet still far from the total number in need, as many orphans are seen as the unwanted children of sin and suffer severe social stigma.

Even from those willing to try: One couple, after taking in a child through the kafala system, returned the three-year-old girl after the wife got pregnant.

Another advocate chided orphanages in general, though acknowledging their workers do their best.

“She will be brought up by foster ‘mothers’ who are employed to care for her, who are overworked and underpaid,” said Yasmina El Habbal, a single woman in her mid-40s, posting her experience raising Baby Ghalia on her public Facebook page. “‘Mothers’ who will leave to get married, and be replaced.”

Mekki is working to remind Muslims that care for orphans— Muhammad was one himself—is a great deed in Islam. And though the formal rules of inheritance exclude the kafala child, sharia law permits any number of “gifts” to be given while the parents are alive. Additionally, their will may specify up to one-third of any inheritance distributed after their death be given to other than their legal heirs.

Breastfeeding a kafala child, furthermore, removes the prohibition on the non-family mixing of sexes, allowing women to keep their heads uncovered after a sponsored boy matures.

Raymond Ibrahim, writing for Coptic Solidarity, was critical. Citing Muslim narratives, he related how the prophet of Islam adopted Zayd, an orphan believed to be the fourth person to accept the faith. But the practice became forbidden when Zayd divorced his wife and Muhammad thereafter married her. Kafala took its place, and precedent was established.

And Christians are among the modern victims.

“The reason Shenouda and his family were targeted is because of their Christian faith,” Ibrahim wrote. “The child—whose background is unknown—was being raised as a Christian, and it is this that has caused the state to act.”

Some critics say the Egyptian government should not have such a right. Article 3 of Egypt’s constitution permits Christians and Jews to govern their own personal status issues—such as marriage, divorce, and inheritance—according to their religious traditions.

“If we subject this matter to the religious concept, adoption is permissible in Christianity, though the opposite in Islam,” said Youssef Talaat, legal advisor for the Protestant Churches of Egypt (PCE). “But the current law does not have articles related to it.”

Talaat represented the PCE alongside the Coptic Orthodox and Catholic churches to present a new unified personal status law before the government. Completed last year, it is expected to be discussed in the upcoming session of parliament, though due to Egypt’s sharia-based prohibition—with kafala as the alternative—adoption (tabenni) is not included within the new text.

Coptic lawyer Naguib Suleiman wants the parliament to amend the proposed family law further, and it is reported some members will lobby to allow adoption for Christians.

Until then, where will orphans go?

“In the absence of a legal framework, civil society organizations have to step in and fill the void,” said Riad. “Our work prevents the Shenouda situation from happening.”

Coptic Orphans, founded in 1988, works in about 800 towns and villages throughout Egypt. Currently serving 9,000 orphans, the organization states it has helped prevent 35,000 children from entering institutionalized care.

A 2017 article in the academic journal Trauma, Violence, and Abuse surveyed 23 studies over 20 years, involving a total of over 13,000 children. Those raised in foster care experienced “consistently better experiences and less problems” than those in orphanages.

As an example, in 2009, American Scientist published research on 136 children in Romania. At 3.5 years, only 18 percent raised institutionally demonstrated secure attachments to their primary caregiver. But 49 percent of those in foster care did so, and 65 percent of those in the general community.

Working in cooperation with church-affiliated orphanages, Coptic Orphans aims to place the vulnerable in the care of relatives. And Riad clarified that most orphans in the Christian network’s care are not fully such: 95 percent of beneficiaries have a mother. But when the father dies, gets imprisoned, or otherwise disappears, the family is often plunged into poverty.

Even in cases where the mother passed away also, the extended family network steps in, buttressed by Coptic Orphans’ financial assistance. It makes kafala unnecessary, and the government does not need to be involved. And in the rare cases when parentage is unknown, the church will quietly place the child with a family.

Spiritual care is also provided. “Typically, it is the priest who places the child within a family,” said Riad. “They know their community, and the necessary provisions, better than any case worker could.”

Riad praised the efforts of the government to expand and promote kafala. But she wonders how Egypt will be able to care for all the children, should plans proceed to close the orphanages.

Yet just as the nation’s Christians once had to skirt the law to build churches until reform occurred, she hopes adoption will become included in the legal revisions. And not just for the rare examples like Shenouda, but for all Coptic children in need of care.

“Families are ‘adopting’ informally already, in the shadows,” Riad said. “If there is legalization for Christians, that would be ideal.”