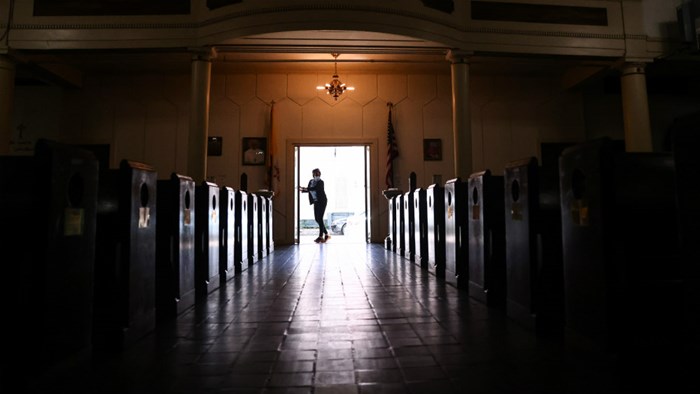 But given the country’s steady trends away from faith affiliation, experts don’t know what it would look like.

Analyzing surveys about religious identity and religious “switching” going back to 1972 and trying to project the American religious landscape out to the year 2070, they can’t even say what demographic signs might indicate a coming swell of conversions.

“We’ve never seen it, and we don’t have the data to model a religious reversal,” Pew senior researcher Stephanie Kramer told CT. “There are some who say that revival never happens in an advanced economy. After secularization, you can’t put toothpaste back in the tube. But we don’t know that. We just don’t have the data.”

The data they do have, from 50 years of research by the General Social Survey and Pew’s own survey of 15,000 adults in 2019, indicates the current trend is inexorable. People are giving up on Christianity. They will continue to do so. And if you’re trying to predict the future religious landscape in America, according to Pew, the question is not whether Christianity will decline. It’s how fast and how far.

In a new study out today, Pew projects that in 2070, Christians will likely make up less than half the US population.

If the rate of switching continues to accelerate, as it has since the 1990s, the percent calling themselves Christians will drop to 35.

The rate of change could also slow down. “Trends don’t tend to continue forever,” Kramer said, “and there’s probably a core of Christians who are committed and never going anywhere.” If the future takes that path, Pew predicts slightly less than 40 percent of the population will say they are Christian in 2070.

“While the scenarios in this report vary in the extent of religious disaffiliation they project,” the study says, “they all show Christians continuing to shrink as a share of the U.S. population, even under the counterfactual assumption that all switching came to a complete stop in 2020.”

Few of the people leaving Christianity appear to be joining other religions. In America today, Jews, Muslims, Hindus, and all non-Christian faiths account for about 6 percent of the population. There isn’t enough information for researchers to isolate differences between these groups. They project that, overall, non-Christian faiths will double in America by 2070, mostly by having children and raising them in the religion.

The dramatic change, according to Pew, will come with the “nones.” People who say they don’t have a religious identity—though many still embrace some Christian beliefs and engage in various spiritual practices—are projected to rise from about 30 percent today to as much as 52 percent in 50 years.

“Modeling the Future of Religion in America” is a new enterprise for Pew, which has previously focused on landscaping religion in America, not trying to predict where things will go. The picture the study paints, though, is not that different from what Pew and other religion researchers have been saying in recent years.

Gallup started regularly giving people the option of “none” on a religious preference question in 2008. The number of people giving that answer immediately started increasing. In 2012, Pew reported that nones were “on the rise,” prompting scores of analyses on the phenomenon.

Ryan Burge, a political science professor at Eastern Illinois University, wrote in his 2021 book The Nones that there was a time when the religiously unaffiliated appeared to be “no more than a rounding error.” But then they “zoomed past 10 percent of the population by 1996, crossed the 15 percent threshold a decade later, and managed to reach 20 percent by 2014.” When he downloaded the raw data from the General Social Survey in 2018, the unaffiliated roughly equaled Catholics and evangelicals in size.

Pew’s new report does, however, clearly identify the mechanism driving the change. By isolating different demographic factors, it shows that declining Christian birthrates and non-Christian immigrants are not significant causes.

The main reason is switching—Christians deciding they are not Christians anymore. This mostly happens to people between the ages of 15 and 29, according to the report, with an additional 7 percent of Christians disaffiliating from the faith after the age of 30.

“Switching out has been happening steadily, which didn’t used to happen,” Kramer told CT. “It used to be that if you met someone on the street, and their father and mother were Christian, then they were Christian too. That’s not always true anymore. For about a third of people, that’s not true anymore.”

Pew does not have a theory about why more people are switching. The research center focuses on the data, leaving explanations to others.

Some, building on the work of the late sociologist Rodney Stark, have argued it’s caused by denominations growing more liberal. According to this argument, if a church emphasizes all the same issues and concerns as left-leaning political activists, then there’s no reason to do the extra work of belonging to a church. They point to shrinking mainline churches. The United Church of Christ, the first mainline denomination to embrace same-sex marriage, lost more than 40 percent of its members in the 17 years after that decision, for example.

Others have connected the trend to conservative politics, arguing evangelical association with Republicans is driving young people away from church. The rise of the exvangelical moment and the uptick in the number of nones in some election years is cited as evidence.

It could be that both Left and Right are having this effect, but Kramer cautions that the trend in the US appears similar to what researchers have seen in other countries, where the political landscape looks completely different. Perhaps it’s not the decisions of churches driving the change, but broader social developments.

Many sociologists, going back to Max Weber, have argued that secularization is inevitable as society advances. Globalization, industrialization, and technology make it harder and harder for people to believe. The biggest change that’s visible today, though, isn’t really a rapid change in beliefs but affiliations. Atheists remain in the single digits in the US. But while many nones affirm the existence of God and even pray, they don’t want to be connected to a religious group or identity.

“We don’t know what all is driving this,” Kramer said. “There are some theories that make sense, but we don’t know.”

As the researchers charted the possible paths for the future, they tried to keep in mind what they didn’t know and the data they didn’t have. Extrapolating from trends doesn’t account for the kind of dramatic events that shape generations.

“It is possible,” the report says, “that events outside the model—such as war, economic depression, climate crisis, changing immigration patterns or religious innovation—could reverse the reverse current religious switching trends.”

Revival could happen. There’s just nothing in the current data that indicates it will.