Now at a new location, the rural Texas church continues on in memory of the 26 members killed, including the pastor’s teenage daughter.
Diana Chandler - Baptist Press|October 3, 2022 12:15 PM 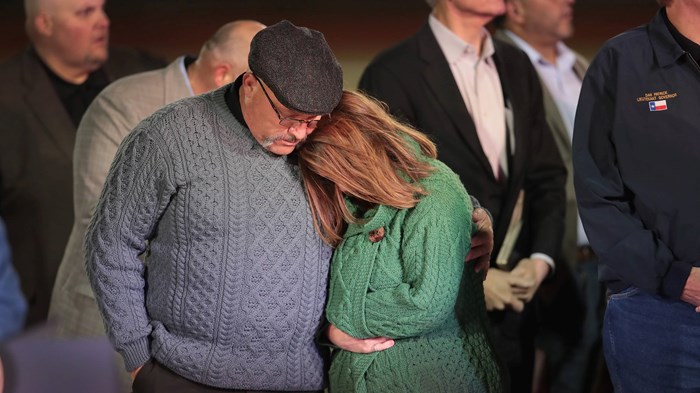 Frank Pomeroy was hunting in the wet and cold Alaskan bush when the Lord gave him his final sermon as senior pastor of First Baptist Church of Sutherland Springs.

“But God kept bringing me back to, this was an opportunity for me to share what’s important for the church to continue on,” Pomeroy told Baptist Press, “and that’s when He … led me to Paul’s letter to Ephesus (Acts 20) and we just went from there.”

“What really brings Sutherland Springs together over these 20 years is that there really is a true sense of relationship and family,” he said. “And therefore, we have always been very inclusive of the community, and that the church would be the center of the community, whether it was during a tragedy or in the good times.

“High on the mountain or low in the valley, there’s always been a true sense of family with those in the community. And that’s the thing I think I cherish the most, is that love never fails, as Paul said, and that love will extend to everyone who will come and listen to the Word.

“I think again, if we can be remembered as promoting and making sure everyone knew that that pulpit was never my pulpit, it’s always God’s pulpit,” he said, “and as being God’s pulpit, he’s reaching out to whomsoever that will listen. And the defining thing would be that that church is not the building, it’s the body, and the body should be out including everyone.”

Pomeroy and his wife Sherri have sold their home to their youngest son Korey and daughter-in-law Ashley, downsized their belongings to a camper trailer and are planning a brief road trip before returning to Texas, perhaps for a campground ministry. But he’s not certain of God’s plan.

Their 14-year-old daughter Annabelle was among those killed when Devin Kelley walked in the church and began shooting indiscriminately in what remains the deadliest mass shooting in Texas history. Kelley fled the scene and fatally shot himself.

The church survived the tragedy by choosing victory, Pomeroy said.

“We could have been validated by the world to choose hate and ugliness and play the victim card,” he preached, “or we could choose to say we are not victims, we are victors. We choose to put our faith in something greater than ourselves. … I don’t understand, but I know I can’t go back and change what’s already done, but I choose from this day forward to say, ‘Lord, You are in control.’ And God has taken that, has made Sutherland Springs a lighthouse on a hill.

“We still get letters that say, ‘I was an atheist, but because of the way you guys handled this situation. …’ Why is that happening? Because we chose to lift up Jesus.”

Pomeroy encouraged the church to embrace humility, which goes beyond individual pain.

“Because of my knowledge of You (God),” he said, “I will take what You have given us that tastes so bad, but I will still use it to share the Gospel for Your glory. And that is what God has chosen to honor and bless.”

Pomeroy’s goal was to stay at First Sutherland Springs as long as the Lord willed, he told the congregation of 200 during the farewell sermon September 25 from Acts 20:17-35.

The church has demolished the building where the shootings occurred and has preserved an open-air memorial to those killed. Since 2019, the congregation has worshiped in a new facility funded by the North American Mission Board with gifts made through the Southern Baptist Convention and other donations.

First Sutherland Springs bought the former Sweet Spirit Baptist Church building in the nearby town of St. Hedwig and in April, opened a north campus about 15 miles north of the main location.

Despite the congregation’s resolve, the Pomeroys find some days more difficult than others.

“There’s still ups and downs, and I don’t think you ever fully handle the loss of a child,” he said. “But as a family in Sutherland Springs, not just my biological family but the church family, we chose to look to something greater than ourselves for understanding.

“Although I might have done things differently, God has brought so many to Christ through this. God’s using her martyrdom and the others to bring others to his saving grace.”

When people ask Pomeroy what the new sanctuary in Sutherland Springs cost, he doesn’t recite a dollar amount.

“I say it cost 26 lives,” he said. “I look at all 26 lives that were lost, including Annabelle, as the blood that was spilled for that church there in Sutherland Springs.

“The blood on this ground is what built this church, and God’s going to honor that.”