Andrew Thorburn’s affiliation with an evangelical Anglican church was “a clear conflict of interest,” according to the club’s president
Dave Crampton|October 14, 2022 09:40 AM 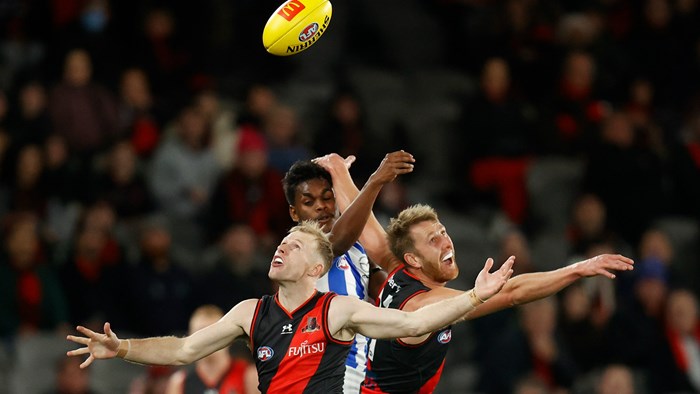 Image: Michael Willson/AFL Photos/Getty Images
Nick Hind and Dyson Heppell of the Essendon Bombers compete for the ball in an Australian football match with the North Melbourne Kangaroos.

Andrew Thorburn, a former banker, was appointed chief executive of Essendon Football Club on September 27. A little more than a day later, he was forced to resign from the prominent “footy” club because of his connection to a conservative Melbourne church.

In a public statement, Thorburn summed the situation up briefly: “My personal Christian faith,” he said, “is not tolerated or permitted in the public square.”

The president of the Australian football club strongly disagreed with that characterization, saying in a statement that “this is not about vilifying anyone for their personal religious beliefs, but about a clear conflict of interest with an organisation whose views do not align at all with our values as a safe, inclusive, diverse and welcoming club.”

Thorburn is chair of the board at City on a Hill, an evangelical Anglican church that started in Melbourne in 2007. It currently has eight sites; five are in Melbourne. The founding pastor, Guy Mason, is affiliated with Acts 29. In 2013, Mason preached about homosexuality, calling same-sex sex a sin, and he has also spoken from the pulpit about abortion, at one point comparing the number of terminations of unwanted pregnancies to the Holocaust.

Online clips of the old sermons surfaced after Thorburn’s appointment, creating a scandal.

Thorburn’s short stint and dramatic resignation may be one of the most egregious examples of someone being forced out of a prominent position for their affiliation with conservative Christianity. His resignation is especially shocking because no one has accused him of saying or doing anything inappropriate. According to the Essendon board, Thorburn doesn’t even hold the offensive views that the club found unacceptable.

“The Board made clear that, despite these not being views that Andrew Thorburn has expressed personally … he couldn’t continue to serve” as the club’s chief executive, president Dave Barham said.

The resignation has sparked a new debate in Australia about freedom of religion. Legal experts point out that Victoria’s Equal Opportunity Act 2010 says people cannot be treated unfavorably because they engage in a religious activity or because they hold or do not hold any lawful belief. Shouldn’t that protect Thorburn?

“The issue we have here is he holds the position in the church,” said Kiri Jervis, a partner at the Sydney law firm Clyde & Co., “and the church holds those views, so does that make the two incompatible in a workplace? That’s the question.”

Neil Foster, a Christian professor at Newcastle Law School, thinks there’s a clear argument the club violated the law. Even though Thorburn officially resigned, he was effectively dismissed.

“It seems likely that what has happened here is ‘direct discrimination,’” he wrote. “It is unlawful to take ‘adverse action’ against an employee on the basis of their religion, unless it can be shown that the action was taken “because of the inherent requirements of the particular position concerned.”

Foster said he couldn’t think why an executive’s churches views on homosexuality or abortion—“views on moral issues that have been shared by Christians, Muslims, Jews, and many other religious believers for a long time”—would be relevant to Australian football.

“Is it really essential to delve into the moral positions of senior executives in a football club?” he asked.

Some religious fans of the Essendon team, known as the Bombers, were deeply offended by the resignation. Peter Comensoli, Melbourne’s Catholic Archbishop and an Essendon supporter, said he was “appalled” and would no longer support the club.

“It is quite a bizarre reality we seem to have entered into,” Comensoli said, “where people are being judged unworthy to lead because of some of their basic Christian beliefs.”

The responses of Anglican leaders were more muted. The Archbishop of Canterbury, Justin Welby, is currently visiting Australia but has declined to comment on the controversy, saying only that secular countries have not yet determined how to deal with differences over faith, ethics, and behavior.

Philip Freier, the Anglican archbishop of Melbourne, said he regretted that Thorburn’s short-lived appointment has been the source of “so much angst for so many people.” He added that it would be “unfortunate if people of faith are sidelined from participation in professional and public life on account of personal religious belief.”

Richard Condie, the Anglican bishop of Tasmania, said he thought that Thorburn’s position was “untenable,” but Essendon should have tolerated his affiliation with a conservative church.

“It seems those whose highest virtue is their professed tolerance have few qualms about being intolerant of others,” he told the Australia Broadcasting Corporation’s Religion and Ethics program.

“I love all people, and have always promoted and lived an inclusive, diverse, respectful and supportive workplace,” said Thorburn, who has been a fan of the Essendon club since he was a child. “Despite my own leadership record, within hours of my appointment being announced, the media and leaders of our community had spoken. They made it clear that my Christian faith and my association with a Church are unacceptable.”

According to Thorburn, he was told he could keep his position at the club if he resigned from the church. He felt he couldn’t comply with the ultimatum.

“I was being required to compromise beyond a level that my conscience allowed,” he said. “People should be able to hold different views on complex personal and moral matters, and be able to live and work together, even with those differences, and always with respect.”

In a second statement released in early October, Thorburn thanked the hundreds of people who had reached out with support and said he’d heard from many people who “expressed genuine worry” about religious discrimination.

On the other hand, Stan Grant, chair of Australian/Indigenous Belonging at Charles Sturt University, argues that “inclusion is always selective,” and “if Thorburn was chairman of a social club that barred women or black people he would have been asked to make the same choice.”

Social mores are changing, Grant wrote, and that will come at the cost of some careers. That’s the price of social progress. He summed it up briefly: “Rendering unto Caesar what is Caesar’s and to God what is God’s is becoming more difficult.”