After a powerful quake hit the island of Java this week, a network of local Christians raced to help.
Angela Lu Fulton and Isabel Ong|November 24, 2022 10:15 PM
Indonesian 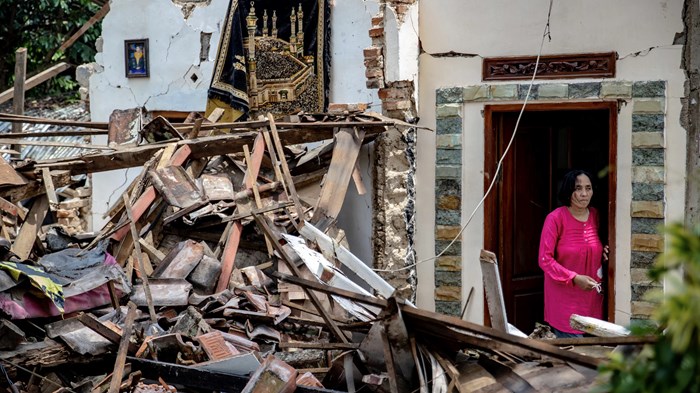 Image: NurPhoto / Getty Images
A survivor of this week's earthquake in Cianjur, Indonesia

When Denny Tarigan arrived in the remote village of Gasol, the earthy smell of wet soil assaulted his senses.

The sound of ambulance sirens permeated the air. Cars and motorcycles filled the narrow dirt roads. As the Indonesian Christian aid worker looked around, he saw blue makeshift tents lined with mats and blankets that were full of earthquake survivors, including children and the elderly.

What he also saw: smiles on the villagers’ faces.

“The people are strong enough to survive this,” said Tarigan, who took a 10-hour car ride from his hometown of Yogyakarta to Cianjur, the regency where Gasol is located, on Wednesday.

“Most of them just don’t know what to do after this,” he said. “For now, they think that they need help from the government and other [disaster relief] agencies.”

While it is common in the United States for churches to engage in disaster relief, in Indonesia most humanitarian aid is provided by government agencies, international NGOs, and Muslim aid groups.

It is only in the past several years that Indonesian churches have started to engage in disaster relief, said Effendy Aritonang, the Indonesia country director for Food for the Hungry and secretary of the executive team of Jakomkris, the Christian Community Network for Disaster Management in Indonesia.

When the 5.6-magnitude earthquake occurred on Monday morning, Aritonang, Tarigan, and other members of Jakomkris kicked into action.

Made up of Indonesian nonprofits and churches, the team called for a coordination meeting to begin identifying needs and figuring out who could provide assistance.

A Mennonite group showed up to provide clean water. About 10 doctors and 20 nurses from a Christian medical fellowship arrived to help overwhelmed hospitals treat patients. A Presbyterian group provided hygiene kits and services for the disabled, while a Pentecostal group set up kitchens for those affected in five different locations. 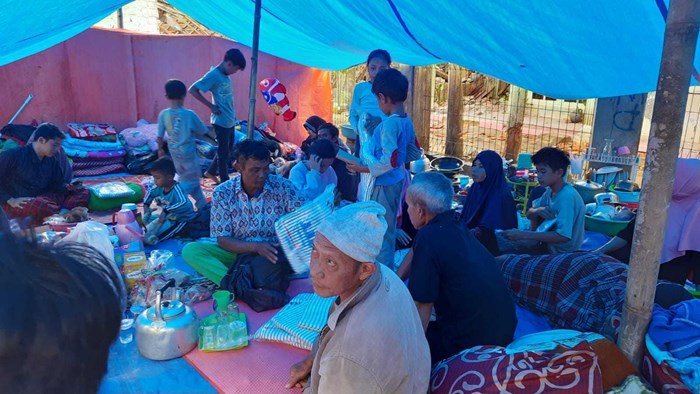 Villagers in Gasol are staying in tents in case aftershocks occur.

The help was sorely needed: By Wednesday, 271 people—many of whom were children—had died and more than 2,000 were injured as the quake flattened homes, destroyed schools, and set off landslides. With roads blocked and electricity down, the full extent of the damage remains difficult to assess—especially in the hilly areas of Cianjur, which is home to 2.5 million people.

Tarigan said Jakomkris’ main duty is to establish a coordination post that can serve as a communication hub. The post has been set up in a local church, Gereja Kristen Pasundan Cianjur. Besides serving as an information-sharing center for Jakomkris’ partner agencies to send aid where it is most needed, it will also be a physical space to store donations and food pouring in for affected Indonesians.

Jakomkris is also assisting the Communion of Churches in Indonesia (Persekutuan Gereja-gereja di Indonesia, or PGI) in issuing daily situation reports for churches and Christian agencies that are providing aid.

Tarigan said one of the most difficult parts of his time on the ground has been a firsthand glimpse of the extensive damage that the earthquake has inflicted upon many homes.

“I believe another earthquake will happen again someday,” he said. “It will take a long time to rebuild houses with a stronger structure again. It costs a lot of money, and the people don’t have [enough funds].”

What Jakomkris is currently doing is novel to a certain degree.

That is because churches in Indonesia have historically focused inward on meeting the spiritual needs of believers rather than outward to the needs of the community, Aritonang said.

In 2017, seven Christian organizations gathered together to discuss what it would look like for Indonesian churches to become “a strong pillar” in their communities in the face of natural disasters that continually pummel the archipelago. (Indonesia, which is made up of more than 17,000 islands, is no stranger to earthquakes, tsunamis, and volcanic eruptions due to its location on the Ring of Fire.)

That led to the creation of Jakomkris, which educates the Indonesian church about the need to engage in disaster relief and how to equip congregations to provide a timely and sustainable response. It connected churches and nonprofits around the country so that regardless of where a disaster strikes, local churches can quickly jump into action.

Their first opportunity to respond came in 2018 when a 7.5-magnitude earthquake hit the island of Sulawesi, causing a tsunami. The twin disasters killed more than 4,000 people and injured more than 10,000. Jakomkris was able to send groups that rebuilt 300 houses, built several churches, and provided mobile medical clinics.

Yet getting churches on board has taken some effort.

Aritonang has found that churches that have been affected by disasters themselves have become the most active in the network, as they understand firsthand the importance of such ministry.

For instance, in October an earthquake hit the island of Sumatra, where the headquarters of a Lutheran denomination is located. “That quickly opened their eyes, and just a week ago they started to form a disaster response team,” he said. 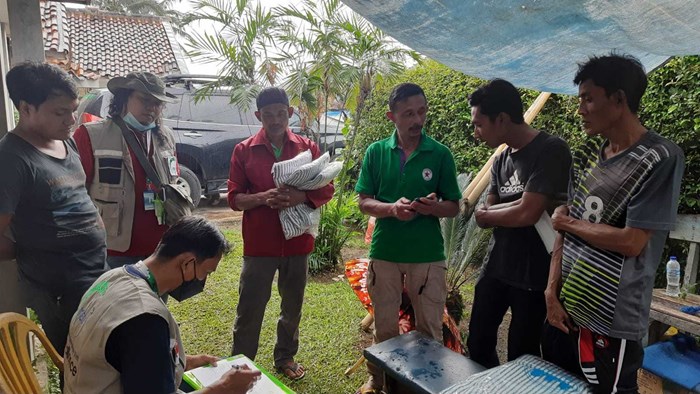 Members of Jakomkris speaking to village leaders in Gasol to compile data on vulnerable groups and their needs.

Mark McClendon, CEO of CBN Indonesia, has lived in the country for 35 years. Within 24 hours, he said, CBN’s teams were at Limbangan Sari, another quake-hit area in Cianjur, to distribute food and shelter kits and to care for children’s psychological health after the traumatic event. By Friday, their medical teams will arrive to care for people who may have breathing issues or are vulnerable to infections.

Local churches across Indonesia have been slow to respond to natural disasters in the past, he added. But it’s a different story now compared to 20 years ago.

“The church has matured collectively,” McClendon said. “We see local churches doing incredible acts of kindness, sacrificially donating [items] and managing resources to be an active participant in restoring, rebuilding, and serving when disasters happen.

“It didn’t used to be like that,” he said. “We would sweep in and local churches would join us and ask if there were things to do that they could help with. Now it’s almost the other way around. We see the local church taking on more responsibility, in the context of community, to serve in almost every disaster.”

Christian aid groups and churches in Indonesia are not alone in their disaster relief efforts.

Many Muslim aid groups, such as Barisan Ansor Serbaguna Nahdlatul Ulama (Banser) and the Muhammadiyah Disaster Management Center (MDMC), are on the ground alongside Christian ones, noted Tarigan.

“Their numbers are bigger than ours. We work with them and share information with them,” he said.

To Tarigan, Christian aid groups can learn from Muslim humanitarians in terms of becoming more responsive. “We pray and hold meetings [before taking action]. It takes too long,” he said. “The Muslims will come first to help clear the roads and buildings.”

A minority in a majority-Muslim country, Indonesian Christians can demonstrate they are equally part of the country and bless their fellow countrymen by standing with them amid disasters, Aritonang said.

“We would like to let the community know that we are the body of Christ,” he said. “It becomes an open door for us to go to them and say ‘Yes, we are your brothers and we would like to share your burden and serve you in this need.’”

[ This article is also available in Indonesian. ]

1 of 2
Villagers in Gasol are staying in tents in case aftershocks occur.Members of Jakomkris speaking to village leaders in Gasol to compile data on vulnerable groups and their needs.
expand