Two-year war ends with the African Union’s first test of transitional justice, as believers continue to debate the rights and wrongs of each side.
Jayson Casper|November 11, 2022 10:00 AM 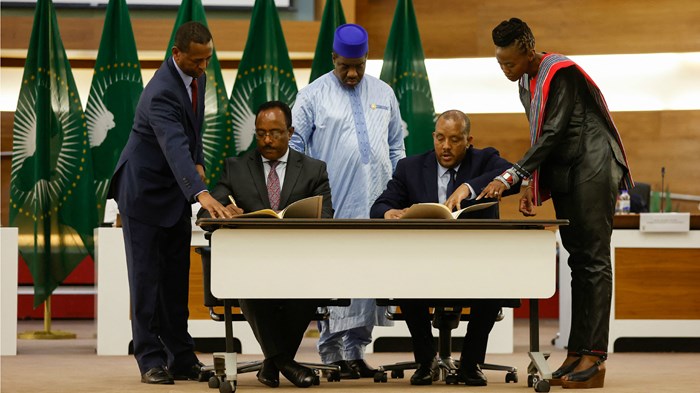 The Ethiopian war in Tigray is over.

On November 2, federal forces and rebel authorities agreed on a “cessation of hostilities,” ending a conflict believed to have killed hundreds of thousands and displaced millions. All sides committed abuses, as documented by the Ethiopian Human Rights Commission and other international observers.

“No one has been clean in this war,” said Desta Heliso, a visiting lecturer at the Ethiopian Graduate School of Theology. “As Christians, we have to feel sorry about this.”

The peace agreement, however, provides for a biblical mandate.

Most negotiations concerned military realities. The two-year conflict in the Horn of Africa nation’s northernmost region—home to 7 million of Ethiopia’s 120 million people—vacillated in advantage between the two sides and between hostilities and humanitarian truce.

But as federal forces pressed deeper into Tigray, peace talks sponsored by the African Union (AU) in South Africa concluded with an agreement for complete disarmament of the Tigray People’s Liberation Front (TPLF) within 30 days. National troops may enter the regional capital of Mekele; assume control of all borders, highways, and airports; and expedite humanitarian aid.

Both sides agree to cease defamation campaigns, and the central government will ensure restoration of communication, transportation networks, and banking services.

But long-term peace may depend on the outcome of a minor clause included among the 15 measures. The federal government agrees to conduct a “comprehensive transitional justice policy” consistent with the AU framework.

Ethiopia will be the first experiment in implementation.

“The possibility for reconciliation is there,” said Heliso, who was formerly vice president of the Kale Heywet Church, one of Ethiopia’s largest evangelical denominations. “But some claims for justice will have to be given up for peace, painful as it might be.”

That may not be necessary.

Adopted in 2019, the African Union’s 2019 Transitional Justice Policy (AUTJP) goes beyond criminal accountability—while ensuring impartial investigation—to set up measurable standards for reconciliation, reparation, and memorialization of the conflict. It establishes commissions, employs traditional conflict resolution mechanisms, and requires the participation of women and other vulnerable groups.

“We now have a Transitional Justice Toolkit,” wrote Moussa Mahamat, chairperson of the AU Commission, in the forward, “that is home-grown … rich in its progressive methodologies and approaches, and rooted in African shared values.”

Now it just needs to be followed.

“The devil will be in the implementation,” stated former Kenyan president Uhuru Kenyatta, who helped facilitate the talks.

The Ethiopian federal government has since lifted the designation of TPLF as a terrorist entity, while the AU—responsible to monitor the peace agreement—has begun translation of the AUTJP into Amharic (Ethiopian).

The UN called the agreement a “welcome first step,” while urging both sides “to continue … in a spirit of reconciliation, in order to … silence the guns and put the country back on the path to peace and stability.”

Many analysts viewed the agreement as a capitulation by Tigray forces. Getachew Reda, head of the TPLF delegation, agreed there were concessions, necessary to “build trust” in the negotiations to come.

Ethiopian prime minister Abiy Ahmed viewed it as a win.

“We need to replicate the victory we got on the battlefield in peace efforts, too,” he stated. And addressing the Tigray people, he said, “Tricks, evilness, and sabotage should stop here.”

Abiy, who won the Nobel Peace Prize in 2019 for ending hostilities with neighboring Eritrea, hailed the agreement amid his nation’s “steadfast” commitment for peace. Significant ethnic tensions and outbreaks of violence continue in the Oromia, Somali, and other regions of Ethiopia.

Heliso linked these to the TPLF seeking to undermine the government. With joy and elation, he said his hope for Ethiopia “quadrupled” once the Tigrayan fighters agreed to lay down their arms.

Abiy, who came to power in 2018, was once part of the ruling TPLF coalition, which dominated Ethiopian politics for 27 years. But as the Oromo evangelical leader began reforms and expanded human rights, he also established a national political party to lessen Tigray predominance.

Tensions leaped during COVID-19, when Tigray held regional elections in defiance of Abiy’s decree to postpone voting nationwide. The war began when rebel forces attacked a federal army base, escalating when the Eritrean military—despite Ethiopian denials—joined in the government’s southern attack by invading from the north.

The worst atrocities have been blamed on Eritrea.

Analysts noted possible weaknesses in the peace agreement in failing to mention this longstanding enemy of the TPLF, or the disputed territories between the Tigray and Amhara regions that also witnessed fighting.

Meanwhile, other Tigray parties and organizations condemned the agreement.

Disarming the regional force is “completely catastrophic,” said Meron Gebreananaye, coeditor of the Tghat media company, which documented federal atrocities during the war. Not politically affiliated, she agreed with their fears.

“It is inconceivable that peace negotiations did not factor in an international peacekeeping force to protect the people of Tigray through a transitional period of national reconciliation,” said the PhD student in theology at the University of Durham in England. “The people of Tigray do not bear guilt for holding their ground in the face of genocide.”

She cited international organizations that warned of military deployments before the war began, as evidence of Abiy’s effort to “fully incapacitate” a political rival. She recognized the Eritrean president as a “perennial spoiler” of peace, condemning the “complete siege” that devastated her region.

But she included religious actors in her doubts about transitional justice.

“The churches of Ethiopia have been part of the problem due to ethnic allegiance or religious kinship with those in power,” said Gebreananaye, a Baptist. “Many are themselves in need of reconciliation and truth.”

Tigray is overwhelmingly Ethiopian Orthodox, the faith expression of about 44 percent of the national population. Evangelical denominations, often called P’ent'ay and mostly Pentecostal, total about 19 percent nationally and are most numerous in the southwest, while Muslims make up about 34 percent of the population.

Heliso said that several offending soldiers have been tried and imprisoned, with investigations ongoing.

Abiy, he predicted, would forgive many Tigray offenders. Lawmakers would return to their parliamentary posts following elections. And the government is worthy of trust, having previously announced two unilateral humanitarian ceasefires later broken, he said, by the rebels.

At the least, the government should be respected.

“People don’t realize how hard our ministers struggle to balance their Christian faith with the need to keep constitutional order,” Heliso said. “Sometimes, by force.”

But beyond the TPLF, his ire was pointed outward.

“Keep the human rights organizations away from us, with their political agendas,” he said. “Let us use our Christian values to deal with our own wounds, ourselves.”

Even for the UN he had “little respect,” and he was optimistic that the AU brokered the agreement and will continue to monitor it. Heliso recently created Sophos Africa, a secular civil society organization, to find African solutions within the Judeo-Christian heritage to the corruption, tribalism, and religious extremism that plague the continent.

Despite her different analysis, Gebreananaye expresses “cautious optimism” about the agreement, hoping it will at least end the brutal conflict. Peace, however, will depend on widespread social transformation and official accountability.

“We have all been wounded, and now must become wounded healers,” echoed Heliso, “while keeping a balance between justice and peace.”