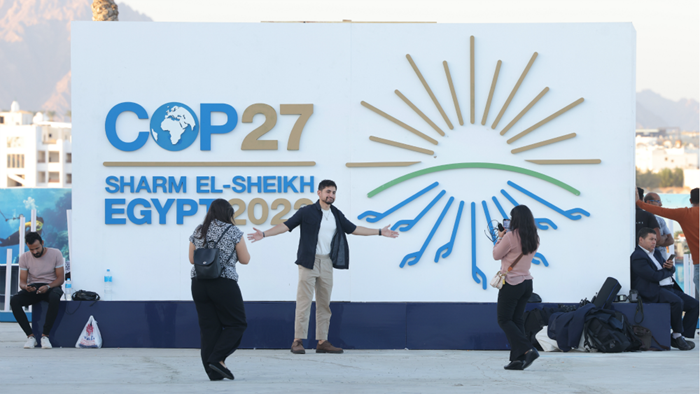 Image: Sean Gallup/Getty Images
Attendees photograph one another outside the main entrance on the first day of the COP27 climate conference in Sharm El Sheikh, Egypt.

Busiswa Dlamini is frustrated at the slow pace as her country confronts the effects of climate change. The Christian activist from Eswatini, the semi-arid southern African kingdom previously known as Swaziland, says as a young person, it is difficult to come up with solutions in the face of a system designed to continue the status quo.

“Yes, we do come up with solutions, but where there are no policies, it’s very hard for us to implement the ideas and innovations that we have,” she told CT. “There’s a gap in my country between what the youth are trying to do and what the government is doing.”

She and representatives from dozens of other Christian churches and church-related groups in Africa, the United States, and Europe gathered in Nairobi, Kenya, last month for a two-day convocation about climate and its impact on hunger. The meeting was organized by Bread for the World and hosted by the All Africa Conference of Churches (AACC), which represents half a million Christians.

The convocation produced a statement ahead of the 27th annual Conference of the Parties to the United Nations Framework Convention on Climate Change (COP27), which began in Egypt on Sunday. The meeting led to the signing of a faith leaders’ statement—A Faithful Voice on Hunger and Climate Justice—that organizers call “bold and prophetic.”

The statement urges governments around the world to pursue “meaningful change for those disproportionately affected by hunger and climate change.” It says that leaders in the Southern hemisphere should develop and implement policies that will address ecological injustice, while governments in the Northern hemisphere should “fulfill all milestone commitments” made at previous UN Climate Change Conferences.

That includes delivering on promises of $100 billion every year to fight the effects of burning fossil fuels.

“The extreme patterns of living and livelihoods of some of us cause the extreme suffering of our brothers and sisters: 10 percent of the world’s wealthiest individuals are responsible for around half of global greenhouse gas emissions,” it says. “As Christians from Africa, Europe, and North America, we share a fierce resolve to stand and work together to end the hunger crisis made worse by climate instability, to renew God’s creation, and to bring our planet into balance.”

US participants included representatives from the Evangelical Environmental Network, the Faith and Justice Network, A Rocha USA, the United Methodist Church, the African Methodist Episcopal Zion Church, and Eugene Cho with Bread for the World.

“We were trying to model how the Western world could essentially come alongside those in Africa who are most impacted and are already doing a lot of the work,” said Jordan Teague, Bread for the World’s director for policy analysis and coalition building.

“One of the things that we heard the most from the [African] faith leaders that we talked with, and who eventually attended the convocation, was the promise unfulfilled,” Teague said. “All people should keep their word, but I feel especially for Christians, or people with a Christian identity, that it’s extremely important to keep the word that we say.”

In 2009, developed nations committed to give $100 billion per year to developing countries to fight climate change, and to reach that goal by 2020. The target has been missed. Combined, adaptation and mitigation finance funding fell at least $17 billion short in 2020.

There will likely be a push for the fulfillment of those promises at COP27, analysts say, despite the fact that many rich countries and their citizens are facing a cost-of-living crisis on the back of rising energy and food prices.

Teague said the convocation in Nairobi recognized the position the world was in. The $100 billion figure may seem like an unattainable goal, but the gathered Christians wanted to add their voices to those calling for it to be fulfilled.

For Arnold Temple, bishop emeritus of the Methodist church of Sierra Leone and president of the AACC, the faith leaders’ statement amplified the voice of the African church on issues of hunger and climate change at a critical moment.

“We pray together as resurrection people for God to empower us to step out of fear, despair, and inertia,” he said.

Climate change is causing extreme weather conditions across the continent. Heavy rains and floods have left millions homeless in a number of countries this year, including Cameroon, the Democratic Republic of Congo, Mozambique, Nigeria, and Sierra Leone, according to Temple. The situation is worsened by biodiversity loss and pollution on the back of deforestation and harmful mining practices.

“We are faced with degradation of our rich biodiversity. We are losing our animals and plants. Some species are now totally extinct,” he told CT.

As world leaders gather in the Egyptian resort city of Sharm El-Sheik, several nations to the south are in the grips of a devastating drought. More than 36 million people have been affected in Ethiopia, Somalia, and Kenya. Parts of Somalia are on the brink of famine. Aid agencies are struggling to keep up: Less than half of an appeal by the UN for $5.6 billion to help those in need has been met by donors.

Computer models of climate change show the Horn of Africa drought—like the recent floods in Pakistan—is inextricably linked to the rise in mean atmospheric temperatures linked to the burning of fossil fuels.

As climate change continues, the financial costs of adaptation will rise, creating real and perhaps intractable problems in the most vulnerable parts of the world. Last week, UN secretary general António Guterres said the adaptation bill is set to skyrocket to $340 billion per year by 2030. Current funds dedicated to adaptation do not amount to a tenth of that, he said.

That worries people like Dlamini, who saw the impact of a harsh drought in Eswatini in 2015 and 2016. To her eye, the country’s rural areas are woefully ill equipped to adapt. And they cannot adapt without help. That’s why it’s so important for activists and religious leaders to join together to call for government action.

“The most important call to action is the call to governments,” she said. “We expect them to change policies and adopt policies that address climate injustice, and also support smallholder farmers.”

This week’s COP27 has been dubbed the “African COP.” But it can only earn that title if its outcomes prove beneficial to the whole world, starting with the urgent needs in Africa in particular, said Temple, the AACC president, who is attending the summit in Egypt.

“We need to work together towards effective mitigation and adaptation,” he said. “We either act together now, or perish together in the near future.”