People around the world have found a passionate community in the hit show about Jesus. With a new season, can it keep navigating fan, investor, and religious demands?
Emily Belz in Midlothian, Texas|November 16, 2022 10:30 AM 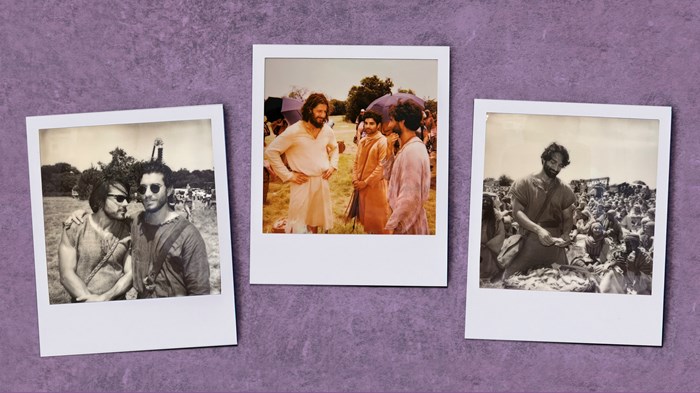 Andrew Cheng and Catherine Williams had their impromptu wedding near craft services, right before shooting a scene in The Chosen of the feeding of the 5,000. The extras­—like so many Christians on the set and so many viewers around the world—were surprised at the close community they found in the hit show.

“It was just bonkers,” Cheng told CT after his wedding to Williams. “Everything was great, except Jesus wasn’t there to turn water into wine.”

In June, The Chosen wrapped filming the scene for its third season that premieres Friday, with about 10,000 fans serving as extras for the multiday shoot in Texas.

Maybe not since Mel Gibson’s Passion of the Christ has there been a biblical hit like this. Other Hollywood projects like Noah or The Young Messiah flopped with Christian audiences for various reasons. But because this show is financed through fans, it has a following unlike any studio project.

The first season debuted in 2019 as a massive crowdfunding success, raising $10 million. Now it has a devoted following all over the world and has been translated into more than 50 languages. The showrunners are planning seven seasons and fundraising $100 million. People often encounter the show with low expectations of didactic Christian content and are surprised to find something more compelling.

Distributor Angel Studios is trying to continue The Chosen’s success in other projects. The first season of Andrew Peterson’s Wingfeather Saga will begin streaming in December. It also drew millions in crowdfunding. Angel Studios founders, brothers Jeff and Neal Harmon, have described The Chosen as their House of Cards, the show that launched Netflix.

The show still operates like a budget version of a Hollywood production in many ways. All of the thousands of extras for the feeding of the 5,000 shoot made their own costumes, with specific instructions from The Chosen’s costume designer Leila Heise. People around the Midlothian area lent ATVs for shuttling people around the production area—900 acres of a Salvation Army camp.

But the show isn’t a simple homegrown product anymore. It just held its first splashy premiere at the Fox Theater in Atlanta. Angel Studios, the distributor, now has venture capital funding. A Chosen Christmas special in theaters last year raked in nearly $14 million, by far the largest gross for Fathom Events. (Even with all of that, the show’s first two seasons were not reviewed by Hollywood trade press like Variety.)

In addition to handling funding and marketing pressures, the show’s creators must navigate the inherent weightiness of reproducing the Gospels. To this point, they have threaded through controversies when they arise to keep making a show that many types of Christians love–theatrical showings for the new season on Friday night were sold out in blue New York City and red Tampa, Florida. Can The Chosen keep that “miracle” going?

Cheng and his fiancée registered to play extras in the feeding of the 5,000—or “F5K” as everyone called it—as soon as they heard about it. Fans could be extras either by donating to the show or winning a raffle. Cheng and Williams had thought about whether to try to get married on set, but the forecast was hitting 100 degrees and they initially put the idea aside.

“Feeding of the fried thousand,” one extra joked.

On the morning of the shoot, the couple was sitting under a big tent in first-century costumes, talking with some other extras, and mentioned that they had considered getting married there. One woman at their table stood up and loudly asked the crowd in the tent if there were any pastors in the vicinity. 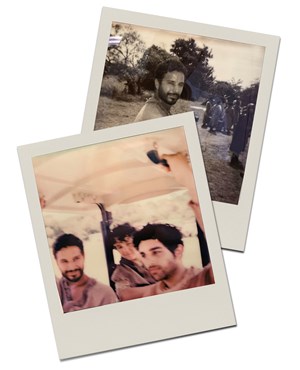 Indeed, there were pastors. One pastor from Louisiana had just done a wedding and still had the liturgy on his phone, so he said he could officiate the ceremony. Cheng showed that he had the marriage license ready to go.

One extra made Cheng a boutonniere out of antibacterial wipes on hand for COVID-19 precautions. Another extra had brought a harp as part of his costume for the shoot and started playing. Two women showed up with shofars. A woman made a flower headpiece for Williams, and someone appeared with two pots of flowers.

The pastor performed the ceremony, and then someone procured a “wedding cake” from the craft services table: a banana nut muffin and a chocolate chip muffin.

Though Cheng and Williams didn’t have family and friends there, Cheng said it reminded him of “an old-time biblical wedding … when the whole town came and brought something. A community wedding.”

The “community” of extras that showed up for the shoot hailed from 36 countries and ranged in ages from 91 to seven weeks, according to the organizers.

Nicholyn Chang, from Malaysia, lives in Washington, DC, and came to the filming with her homemade first-century costume. Her roommate in DC is from Uruguay and got all of her friends in Uruguay to start watching the show too.

Between takes on the blistering day, a Catholic couple from Brazil was fanning themselves, and one of their two children was playing in a diaper under an umbrella. Friends had told them about the show many times.

“We were somewhat resistant. I thought it would be cheesy or preachy,” said Carlos Crestana. But by episode 5, he said, “We were all in. We told all our friends.”

The Chosen’s writer and director, Dallas Jenkins (son of author Jerry Jenkins), always insists that the show is not a replacement for church, nor is it a ministry.

Fans disagree: “It is a ministry, in a totally different way. It’s affecting so many different people,” said Cheng, who wears Chosen swag everywhere and says it “starts a conversation” about Christianity.

Jenkins has said his goal is to create art that reflects a world where faith exists, which he thinks is underrepresented in film. 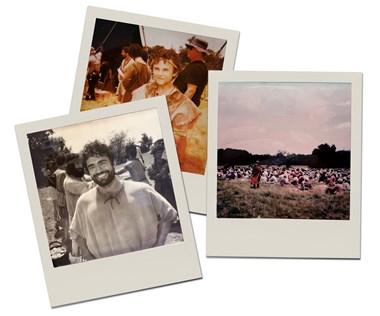 On set one of the screenwriters, Tyler Thompson, was taking Polaroid photos. His parents, Steve and Morene Thompson, had come to play extras, and his mom started crying looking at the crowds, overwhelmed at what the project had become.

Tyler Thompson told CT he sees two kinds of Bible movies. There are either Hollywood studio-backed projects like Noah that have “a twist,” which tends to flop with church audiences because they “feel betrayed by some deviation from the source material.” Or there’s “extremely poorly funded, didactic, basically propaganda, [with] terrible actors who are white,” he said. “That flops with everybody.”

Unlike many other biblical epics, The Chosen intentionally cast people with the ethnicities of the story—Middle Eastern, Jewish, and African. Jordan Ross, who plays the disciple known as “Little James” in the show, has cerebral palsy and scoliosis that makes him limp.

The disciples and Jesus (Jonathan Roumie) have enthusiastic and sometimes overzealous fans.

“I love you, Matthew!” screamed a girl when the crowd of extras and actors, including Paras Patel who plays Matthew, were between takes.

Jenkins reminded the extras not to touch the actors or try to take selfies with them as they were going through the crowd during filming.

“It's never been on the job description for writing before that you’ll end up in a spot with 5,000 extras,” said Ryan Swanson, one of the other screenwriters, who has experience working on other Hollywood projects.

The show has had its controversies, but nothing has killed its momentum thus far. Jenkins often responds to complaints on livestreams like he did recently when people claimed a line Jesus says in the show—“I am the law of Moses”—was quoting from the Book of Mormon.

“Jesus makes many ‘I am’ statements and is called the ‘Great I Am.’ So no, I didn’t pull this quote from anywhere else,” Jenkins said.

Fans have brought up the possible Mormon influence on the show because Angel Studio executives the Harmon brothers; the president of Chosen Productions Brad Pelo; and the CEO Derral Eves are all Mormon. Jenkins and his cowriters, Swanson and Thompson, insist that they are the only ones who decide what goes in the show creatively.

The show’s marketing this year also took some big swings—putting up Chosen billboards that looked like they had been defaced, causing confusion among even the fans and eliciting an apology from Jenkins. But the show kept the ads going.

With that ad campaign, The Chosen’s head of branding Jeremiah Smith told CT the show was looking for “more of a psychographic than a demographic. People who were jaded with church…We thought humor and sarcasm would be a way to get a different audience in.” 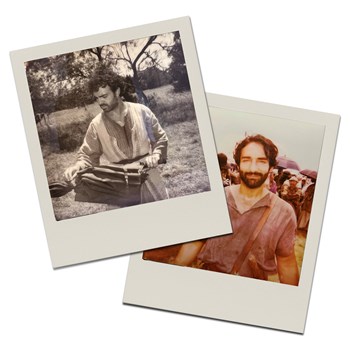 Controversies and overzealous fans aside, Jenkins reminded the thousands under a hot Texas sun of the main thing: They were recreating “one of the greatest moments in human history.”

Being able to experience a moment like that, even a shadow of it, helps explain why Christians from Brazil to Malaysia love this show and want to be a part of it. Though the weather for the shoot was blistering, maybe this is what a day on a hot Galilean hill felt like. People sweated and sought cover under trees or umbrellas, but—even when told they could leave—stayed for hours. Children ran to and from the bushes to take bathroom breaks or pet the Roman soldiers’ horses. The disciples handed out real bread to the crowds, and after the sun went down and the shoot wrapped, Roumie recited the Lord’s Prayer to the crowd in Aramaic.

Ruthie Ross came from Denver, Colorado, with her 23-year-old son Miles Ross, who has Down Syndrome and is in a local acting program. The two of them had been planning this trip since August of last year.

“I’ve been thinking about something like this for 20 years,” she said. “I want Jesus to be more real to people.”

The first two episodes of the third season of The Chosen will be in theaters Friday, for five days. All episodes, as usual, will be free and available on The Chosen ’s app.

This article has been updated to reflect that Angel Studios founders Jeff and Neal Harmon are distributors not producers of the show.

The Real Miracle on the Set of ‘The Chosen’ Is ...