A Presbyterian was burnt in effigy, a Methodist was shot in the leg, and that’s just the start of the story of this constitutional prohibition.
Daniel Silliman|May 10, 2022 02:15 PM 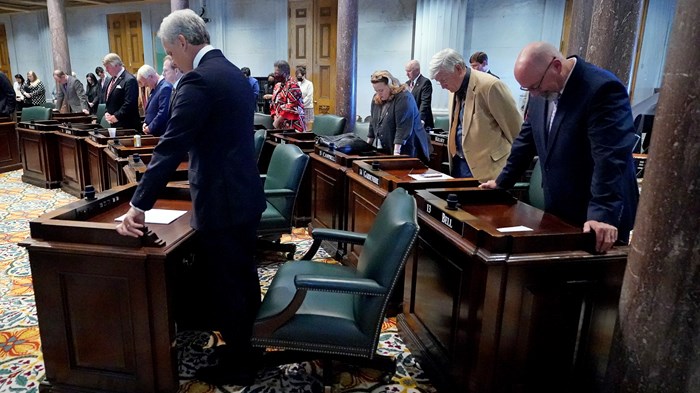 Tennessee voters will decide this fall whether to lift a ban on clergy serving in the state legislature. The ban hasn’t been enforced since 1978, when the United States Supreme Court ruled it unconstitutional, but it’s still written in the state constitution, as it has been since Tennessee was founded.

The state senate and assembly have put an amendment on the November ballot so voters can change that. Tennesseans will be asked if they would like to strike section 1 of article IX, which says that “no minister of the Gospel, or priest of any denomination whatever, shall be eligible to a seat in either House of the Legislature.”

The change was proposed by Republican state senator Mark Pody, a conservative evangelical from outside of Nashville. Pody believes “Our fore fathers founded this nation on Christian biblical values.” It’s one of the five core issues he lists on his website. “I adhere to such principles,” he writes.

But when he was asked why Tennessee’s forefathers barred Christian ministers from becoming lawmakers when they founded the state in 1796, Pody didn’t have an answer.

“That’s a great question,” he told the Chattanooga Free Times Press. “I don't know the back story or why they put it in originally.”

He’s not alone. The history of the constitutional clause keeping clergy out of the legislature is obscure, even among scholars who study the separation of church and state. Section 1 of article IX isn’t a part of anyone’s standard historical narrative.

The strange story of why Tennessee is only now considering changing the constitution to allow ministers into the state legislature involves Anglican oaths, Presbyterian effigies, fighting Methodist, and Baptists breaking tradition.

A tool for religious disestablishment

The legal language originally comes from England. Because England had an established church, its ministers were vested with the authority of the state and so couldn’t be involved in electoral politics, just as today it would be seen as a problem if an active-duty soldier ran for Congress.

But when the newly independent American states started to disestablish religion—working out the legal ways to separate church and state—this establishment rule seemed useful. Instead of abandoning the old law, Georgia, South Carolina, North Carolina, Virginia, Maryland, Delaware, and New York all incorporated it into their new constitutions.

Not all advocates of the separation of church and state approved. James Madison, who drafted the US Bill of Rights, thought disqualifying ministers from representative government was a travesty.

“Does not the exclusion of ministers of the gospel, as such, violate a fundamental principle of liberty by punishing a religious profession with the privation of a civil right?” he wrote to his friend Thomas Jefferson.

Jefferson wasn’t swayed. Though he believed that “all men shall be free to profess … their opinions in matters of religion, and that the same shall in no wise diminish, enlarge, or affect their civil capacities,” he included the line disqualifying ministers from the state legislature in his draft of the Virginia state constitution.

One reason was widespread animosity toward Anglican clergy. Most opposed the American revolution. Anglican priests took an oath to the king in their ordinations, and in every service prayed that God would save him. This put them at odds with the new nation, freshly free from that same king. A lot of them fled. In Virginia, more than two-thirds of the Anglican churches closed. In North Carolina and Georgia, the once-dominant church dwindled to one priest and one parish each. And the new states, drafting their new constitutions, were not eager to give them a way to gain back any power.

After the revolution, half a dozen additional states, including Kentucky, Mississippi, and Tennessee, adopted the same legal language about ministers.

The founders of Tennessee may have also been influenced by what happened in the state of Franklin (or, as it was sometimes called, “Frankland”). A group of white settlers attempted to separate from North Carolina and establish a new state in what is now East Tennessee in the mid-1780s. A proposed constitution was drafted by a Presbyterian minister—and then successfully shot down by another.

The first, William Graham, proposed that only orthodox and moral men should make laws. He drafted a constitution that required representatives agree that there are three persons in the Godhead, co-equal and co-essential, along with other theological statements. But Graham wasn’t picturing where his fiercest opposition would come from: another Presbyterian.

Hezekiah Balch, on the other hand, was used to fighting his fellow Presbyterians. He was an advocate for evangelical revivals and continually clashed with the Old School Calvinist leaders who disapproved of the excess and emotions. In the process, Balch developed a strong personal aversion to religious authorities. He went out of his way to oppose Graham’s constitution, arguing it didn’t sufficiently protect religious liberty in the new state.

The disagreement started with dueling speeches. That led to a volley of aggressive pamphlets and expanded to include theological issues such as election and revivalism.

And it got personal. Graham said Balch was trying to make room for evil in local politics.

He was subsequently burned in effigy.

The escalating dispute was brought before a church judiciary—where it threatened to split the regional synod.

A decade after the dispute divided the unborn state of Franklin, the state of Tennessee was founded with a constitution that was mostly borrowed from North Carolina. The founders decided to keep that line barring clergy from the state legislature.

They thought of Methodists

Over the next 100 years, almost all the other states got rid of the prohibition on clergy in the legislature. But not Tennessee. In Tennessee, when state leaders thought about pastors becoming politicians, they didn’t think of their own pastors or people they liked. They thought of Methodists.

Methodists like William Gannaway Brownlow. A circuit-riding Wesleyan who was once shot in the leg in a theological dispute, Brownlow earned the nickname “the fighting parson.” After years preaching he switched from pulpit to press and became a sarcastic newspaper editor and fierce opponent of secession and the Confederacy. Then he became governor during Reconstruction. (The constitution might have prohibited him from taking a seat in the state assembly or senate, but it never said anything about governor.)

Brownlow was a force as governor. He was racist by the standards of his own time, but he hated Tennessee’s Confederate traitors more than anything, so he became a radical Republican and dedicated his political career to punishing Confederates and securing civil rights for Black people.

It didn’t make him popular. And it didn’t persuade many state leaders to make it easier for ministers to go into politics.

After Brownlow and the end of Reconstruction, Tennessee saw a flood of politically active Methodists as the church grew rapidly. One preacher at the time claimed there were nearly 3,000 preachers who “would not hesitate” to be called political partisans. They picked up the banner of prohibition, and one Methodist minister from north of Nashville ran for governor on the Prohibition Party ticket.

For those opposed to prohibition—and its related reform effort, women’s suffrage—it was obvious why Tennessee’s forefathers had prohibited ministers from becoming lawmakers.

“Methodist preachers divert themselves,” one prominent state judge complained at the end of the 19th century, “from the care of souls to the task of amending constitutions.”

Judge Jere Black hurried to clarify he didn’t have any problem with the people in the pews or preachers who didn’t advocate for women’s right to vote. But, he said, politically active Methodists were undermining democracy and eroding the separation of church and state.

“Christ and his apostles kept them perfectly separate,” he wrote. “They expressed no preference for one form of government over another. They provoked no political revolutions, and they proposed no legal reforms.”

Other states at this time revised their constitutional provisions against ministers in the legislature. Tennessee kept section 1 of article IX in place.

It was Baptists who finally broke the constitutional ban on ministers in the legislature. Two Black Baptists in particular: Roy Love and Paul McDaniel.

Love was pastor of Mt. Nebo Baptist Church in Memphis, and he got involved in the civil rights movement, fighting poll taxes and registering Black people to vote. In 1954, he decided he could do more as a state senator and announced he was going to run for office.

The initial reaction was surprise. “It was the first time in the memory of local political observes that a Memphis Negro has presented himself as a candidate for political office,” a Memphis paper reported.

Journalists asked him if he didn’t think he would lose, but Love was undeterred.

Then someone in power remembered the constitutional prohibition, and Love was told he was disqualified. Even if he took a leave of absence from the church, the state said, he couldn’t serve in the legislature.

Paul McDaniel, pastor of Second Missionary Baptist Church in Chattanooga, tried again 23 years later. He ran to be a delegate to the 1977 constitutional convention, where Tennessee would consider amendments to end segregated schools and a ban on interracial marriage. Delegates had to meet the same standards as legislators to qualify, however, and his opponent sued to keep McDaniel off the ballot.

The case went to the Supreme Court. The Southern Baptist Convention’s public policy arm and the American Civil Liberties Union both wrote to the court to support McDaniel, defending the rights of ministers to get involved in politics.

On the other side, an assistant attorney general for the state of Tennessee argued the constitutional ban wasn’t an arbitrary discrimination against ministers but had an important purpose: the separation of church and state.

The court disagreed. Chief Justice Warren Burger wrote that Tennessee was making the ability to exercise a civil right—the right to run for office—conditional on the surrender of a religious right, the right to be a minister. Seven justices signed on to the opinion and one abstained, giving McDaniel a unanimous 8–0 victory.

The first minister was elected to the Tennessee legislature the next year. Ralph Duncan was a white Pentecostal from Western Tennessee. He ran as a Republican, won, and served four years before he decided to leave politics and start a new church.

He was followed by more ministers in the legislature, some of whom served with distinction and some who were little noted outside their districts, until the sight of clergy at the capitol became, for the most part, unremarkable. But section 1 of article IX of the Tennessee constitution stayed on the books, a vestigial reminder of the complicated and confusing history of religious liberty and the ongoing fights over the relationship of churches and states.

State legislatures may not know the whole backstory, and voters most likely have never heard of the Baptists, Methodists, Presbyterians, and Anglicans who ran up against that constitutional rule. But they’ll decide in November whether they finally want to get rid of it.

Why Tennessee Is Just Now Looking at Lifting a Ban ...