After War, Can Armenia’s Evangelicals and Orthodox Save Their Nation Together?

Some evangelicals thank Apostolic church for preserving their nation amid trials. Some priests fear Protestant newcomers will divide it.
Jayson Casper in Yerevan, Armenia|April 1, 2022 12:00 PM 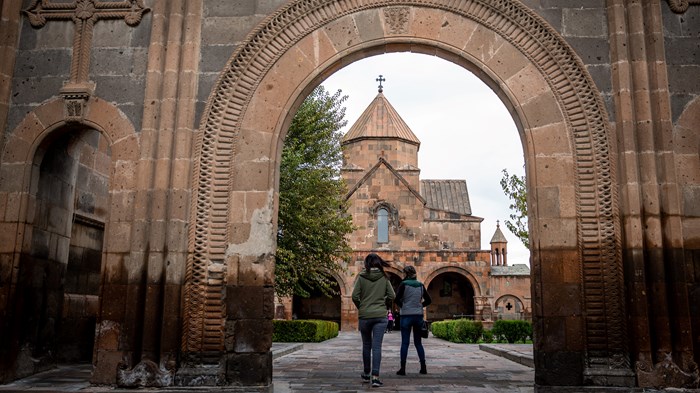 Craig Simonian had a vision. It landed him in a war zone.

Raised in an Armenian-American Orthodox family, he came to know Jesus personally at university. He served as a Vineyard church pastor in New Jersey for nearly two decades but continued to embrace his Apostolic church heritage.

It laid the foundation of his faith—but also of his nation of origin.

“The reason Armenia still exists is because of the church,” he said. “It kept our shattered people together, especially in the diaspora.”

As a child, Simonian’s grandmother witnessed her father and mother murdered in the Armenian Genocide, killed by Turks in the waning days of the Ottoman Empire.

When she eventually arrived in America, it was the Apostolic church that embraced their family. Simonian recalled kindly visits by priests of their Oriental Orthodox tradition who—in the face of tragedy and devastation—gave him a deep appreciation of the sovereignty of God.

It was his evangelical awakening, however, that drew him back to Armenia—and in particular to its church. He relocated in 2018 to a nation locked in a cold war with neighboring Azerbaijan. A self-professed “oddball,” he longed for the Apostolic church to embrace fully the gospel he had discovered.

“If we are going to reach this generation, we can’t do it without them,” Simonian said. “I will call people to Jesus but never to leave their church.”

Azerbaijan invaded the Armenian-controlled enclave of Nagorno-Karabakh in October 2020. The territory is recognized internationally as belonging to Azerbaijan, yet the residents of what Armenians call Artsakh voted for independence in 1991. For three decades Armenia held the upper hand but was routed in a 44-day war through superior drone technology that Turkey and Israel supplied to Azerbaijan.

Russian intervention enforced a ceasefire, with Nagorno-Karabakh demolished and Armenians holding a fraction of their previous territory. The nation felt numb after its defeat, and many found refuge in the Apostolic church.

His primary worship is through Yerevan International Church. But few in his personal circles have saluted his efforts to attend the Divine Liturgy and cultivate relationships with Orthodox clergy. Many evangelicals are soured by years of the older tradition labeling the newcomers a sect, or worse, a cult. But neither has Simonian yet found in the Apostolic church the fellowship that characterized his diaspora youth.

“The warm fuzzies I had growing up are completely void here,” he said. “The church is not so much a community.”

Simonian understands. Soviet communism purged the church, replacing clergy with compliant leadership. Following Armenia’s independence in 1991, this generation still exists but is giving way to a spiritual cadre that he says recognizes the church needs more than ancient traditions.

“We do not need to re-evangelize Armenia,” said Shahe Ananyan, dean of Gevorkian Theological Seminary in the Apostolic holy see of Etchmiadzin, 13 miles west of Yerevan. “Our main task is to wisely consider how to bring both Eastern and Western traditions together in synthesis.”

The church is still discussing application, he said. But he recognized that modern life for many has crowded out liturgical attendance and Bible reading.

Forging forward anyway is Bagrat Galstanyan, bishop of Tavush, 100 miles northeast of Yerevan on the border with Azerbaijan. Previously presiding over the Canadian Apostolic diocese of Montreal, he is well placed to assist the synthesis—but is struggling with the weight of his spiritual responsibility.

“Practically, we are stretched,” Galstanyan said. “I am relying on the institutional memory of the church.”

Pre-pandemic, he established the One Community, One School program to get religious education—and social work—into the remote villages of Tavush. Out of 70 parishes, his diocese has 18 operating church buildings but only 10 priests.

At Galstanyan’s inauguration, he pledged to “bring Christ into every home.” Sunday school–type activities take place every day after regular classes, which become a sort of village center. And he is uniting each group under rotating themes, with family, identity, salvation, and eternal life at the forefront.

“We start at a level people can grasp easily, and then widen it,” he said, focusing on practical, everyday issues. “The gospel imperative is for the Word to become flesh.”

Galstanyan welcomes evangelical partnership in Tavush. But the few groups currently there, he said, pursue their own interests. And across the country, he lamented, there are so many denominations—all with different names and purposes.

“How can you claim to follow the one unchangeable Christ,” he asked rhetorically, “when you are internally divided?”

Armenia also lacks an evangelical alliance, noted one pastor. Previous efforts fell apart when the new government widened religious freedom, lessening the need for solidarity. Each group then went back to its own ways.

It is very confusing for Armenians, admitted Hovhannes Hovsepian.

Pastor of the Armenian Evangelical Church (AEC) in Yerevan, he is also assistant to the head of the historic Protestant denomination. Founded in 1846 during an Armenian revival and reformation effort in Turkey, its presence is more recent in Armenia proper. Its relief and outreach ministries expanded dramatically after an earthquake in 1988.

Unlike most Baptists and Pentecostals, these evangelicals seek to honor the Orthodox as the “mother church.”

“We stress the importance of the Word of God and the gospel, against traditions that marginalize these,” Hovsepian said. “But once reformation happens, we can freely go back.”

For centuries, he explained, the Apostolic church not only preached Christianity but also held the Armenian people together in unity, becoming the church of the nation. They cannot comprehend another denomination within their fold.

The ancient church traces its roots to A.D. 301 when St. Gregory converted Armenia’s king and created the world’s first official Christian nation. Hovsepian said the church has a biblical explanation for every Apostolic tradition but most priests do not communicate this to the people. And with the liturgy conducted in the old Armenian language, those in the pews cannot understand the richness of their heritage.

Instead, the church calendar is populated with saints who distract intercession away from Jesus himself—the one mediator between God and humanity.

“They prefer to light a candle,” Hovsepian said, “than to open their hearts toward God.”

Ananyan, who is also the head of the ecumenical department of the Apostolic church, grudgingly appreciates the “mother church” label. And he is not against the Reformed faith. The current Catholicos (akin to Patriarch), Karekin II, is also a current president of the World Council of Churches and oversees an official dialogue with the Anglican Communion.

But the Orthodox seminary leader suspects that local evangelicals are confused by what it means to be Armenian. More than 100 different Protestant entities are registered by the government.

“Is their purpose to create as many evangelical communities as possible or to renew spiritual life?” asked Ananyan, calling it nonsense. “Instead, they are creating division and a deformed community.”

He views such splintering as dangerous. By pluralizing Christian identity, Protestants divorce the connection between religion and ethnicity. Look at the results in Europe, he said, where the entire faith is under threat.

“People can choose what type of church speaks more to their heart,” he said, as some veer toward preaching, music, or tradition. “God is using the church in its diversity, as each gathers its particular flock.”

But there is ample room for cooperation. The last half decade has seen an unofficial dialogue between the Apostolic church and the AEC, resulting in greatly improved relations.

Through the Bible Society of Armenia, Hovsepian has joined Catholics in teaching the Bible to public school teachers, under the auspices of Etchmiadzin. The three denominations have jointly translated the New Testament into modern Armenian, soon to be released to the public. And the Christian Women’s Forum adds Greek Orthodox and Assyrian participation, providing financial and moral support to young mothers considering abortion, among other services.

The Bible Society board is composed of five Orthodox members, two evangelicals, and one Catholic. Ananyan said it sold 30,000 Bibles last year, evidence of a steady hunger for the Word of God.

But though he lauds the Apostolic church for its missionary role in the sixth century, he believes such outreach is not appropriate today among its Muslim neighbors. Instead, the witness of the church comes through preservation—especially of historic monasteries seized by Azerbaijan during the war and threatened with the erasure of their Armenian identity.

This steadfast faith should be better respected by Protestants and Catholics, he said.

“We as a nation are called to witness to Jesus Christ in a very difficult region,” said Ananyan. “Our very existence is a testimony of Christianity.”

This also burdens the heart of Simonian, who is eager to join with the Orthodox to promote church growth and evangelism.

The church is ancient, but it continues.

“I love the Apostolic church,” he said. “Every dream I have for Armenia includes them.”

After War, Can Armenia’s Evangelicals and Orthodox Save Their Nation Together?

After War, Can Armenia’s Evangelicals and Orthodox ...