(UPDATED) Ohio-based Christian Aid Ministries is praying members of 400 Mawozo would come to repentance and release 16 American and one Canadian adults and children.
Dánica Coto and Evens Sanon – The Associated Press |October 17, 2021 10:11 AM 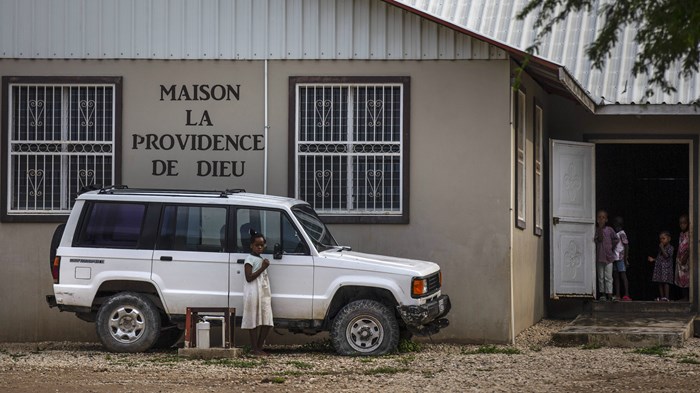 Image: Joseph Odelyn / AP Photo
Children stand in the courtyard of the Maison La Providence de Dieu orphanage in Ganthier, Croix-des-Bouquets, Haiti on Sunday, October 17, after the 400 Mawozo gang abducted 16 American and one Canadian missionaries from Christian Aid Ministries after a trip to visit the orphanage.

Editor’s note: The 400 Mawozo gang has demanded a $1 million ransom per kidnapped missionary and threatened death if the demand is not met.

PORT-AU-PRINCE, Haiti (AP) — A notorious Haitian gang known for brazen kidnappings and killings was accused by police Sunday of abducting 17 missionaries from a US-based organization. Five children were believed to be among those kidnapped, including a 2-year-old.

The 400 Mawozo gang kidnapped the group in Ganthier, a community that lies east of the capital of Port-au-Prince, Haitian police inspector Frantz Champagne told The Associated Press. The gang was blamed for kidnapping five priests and two nuns earlier this year in Haiti.

The gang, whose name roughly translates to 400 “inexperienced men," controls the Croix-des-Bouquets area that includes Ganthier, where they carry out kidnappings and carjackings and extort business owners, according to authorities.

Ohio-based Christian Aid Ministries (CAM) requested “urgent prayer” for the kidnapped group, which consisted of 16 US citizens and one Canadian for a total of five children, seven women, and five men. The organization said they were on a trip to visit an orphanage.

“Join us in praying for those who are being held hostage, the kidnappers, and the families, friends, and churches of those affected,” CAM said in a statement. “As an organization, we commit this situation to God and trust him to see us through. May the Lord Jesus be magnified and many more people come to know His love and salvation.”

The statement cited verses from Psalm 91: “He that dwelleth in the secret place of the most High shall abide under the shadow of the Almighty. I will say of the Lord, He is my refuge and my fortress: my God; in him will I trust … For he shall give his angels charge over thee, to keep thee in all thy ways.”

A member of the Evangelical Council for Financial Accountability (ECFA), Christian Aid Ministries explains on its website that the group “strives to be a trustworthy and efficient channel for Amish, Mennonite, and other conservative Anabaptist groups and individuals to minister to physical and spiritual needs around the world.” A post last week described its sponsor-a-child school program in Haiti, which it says supports 8,600 children. 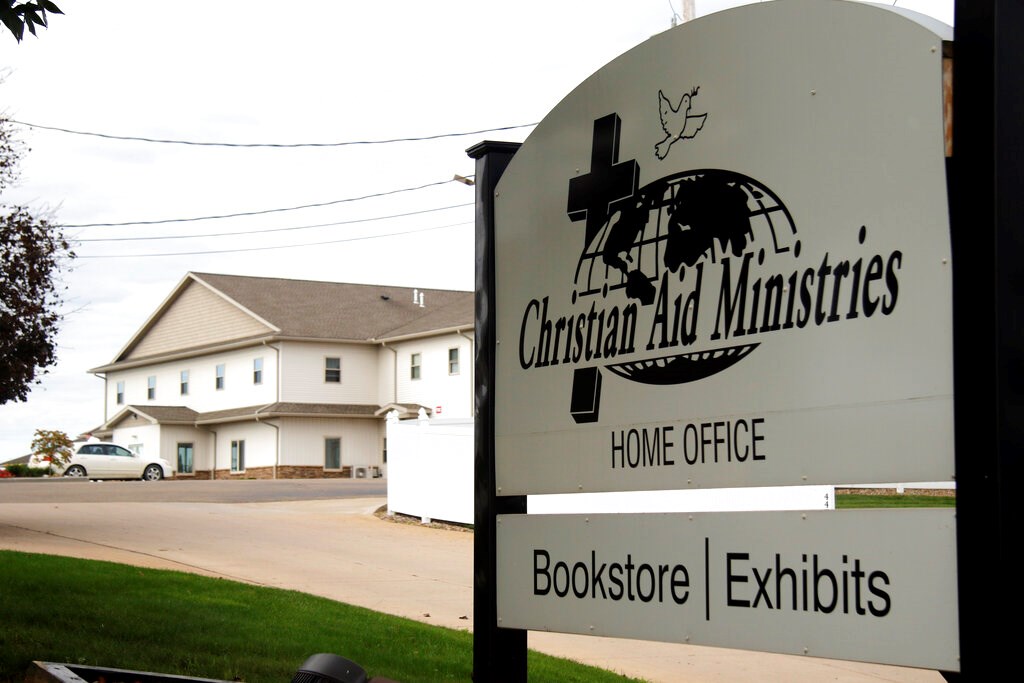 Christian Aid Ministries in Berlin, Ohio, is seen here on Sunday, October 17, 2021, after news that a gang kidnapped a group of 17 missionaries after a visit to an orphanage.

Haiti is once again struggling with a spike in gang-related kidnappings that had diminished in recent months, after President Jovenel Moïse was fatally shot at his private residence on July 7 and a 7.2-magnitude earthquake killed more than 2,200 people in August.

The missionary group offers Bible classes, runs a medical clinic, helps orphans, and distributes seeds to farmers, among other efforts in Haiti, according to its annual report.

The report for last year said that American staff had returned to their base in Haiti after a nine-month absence “due to political unrest" and noted the “uncertainty and difficulties” that arise from such instability.

An AP team on Sunday visited the group’s orphanage in Ganthier, where a couple of children were seen walking through a yard. A security guard confirmed that it was the place the kidnapped missionaries visited before they were abducted. The guard called the orphanage’s pastor at the AP’s request, but he declined to comment, saying only, “Let’s leave things as they are.”

Nearly a year ago, Haitian police issued a wanted poster for the gang’s alleged leader, Wilson Joseph, on charges including murder, attempted murder, kidnapping, auto theft, and the hijacking of trucks carrying goods. He goes by the nickname “Lanmò Sanjou,” which means “death doesn’t know which day it’s coming.”

Joseph, who could not be immediately reached for comment, has posted videos detailing the alleged crimes the gang has committed in recent years.

Once, when the gang opened fire on a small bus carrying several passengers and killed an infant, Wilson said it was not their fault because the bus driver refused to stop. In a more recent video, he appears holding a bottle of alcohol surrounded by heavily armed men. Another video from June shows people inside a church fleeing as gunfire erupted outside on a Saturday morning. The gang was accused of raiding the area and setting cars on fire.

A senior US official, speaking on condition of anonymity, said the United States is in touch with Haitian authorities to try to resolve the case.

CAM came under public scrutiny in 2019, when one of the group’s former workers based in Haiti was convicted of felony sexual abuse against minors in Ohio. Jeriah Mast, 40, is serving a nine-year sentence in an Ohio prison. During the hearing, the judge said Mast told him that he also molested at least 30 boys in Haiti in the span of about 15 years, according to The Daily Record newspaper in Ohio.

The organization said in a May 2020 statement that it had reached an out-of-court settlement with victims regarding a sexual abuse case in the Haitian community of Petit Goave and had provided other victims with a total of $420,000 in restitution and other assistance.

Amid the spike in kidnappings, gangs have demanded ransoms ranging from a couple of hundred dollars to more than $1 million, according to authorities.

Last month, a deacon was killed in front of a church in the capital of Port-au-Prince and his wife kidnapped, one of dozens of people who have been abducted in recent months.

At least 328 kidnappings were reported to Haiti’s National Police in the first eight months of 2021, compared with a total of 234 for all of 2020, according to a report issued last month by the United Nations Integrated Office in Haiti known as BINUH.

Gangs have been accused of kidnapping schoolchildren, doctors, police officers, busloads of passengers, and others as they grow more powerful. In April, a man who claimed to be the gang leader of the 400 Mawozo told a radio station that they were responsible for kidnapping five priests, two nuns, and three relatives of one of the priests that month. They were later released. 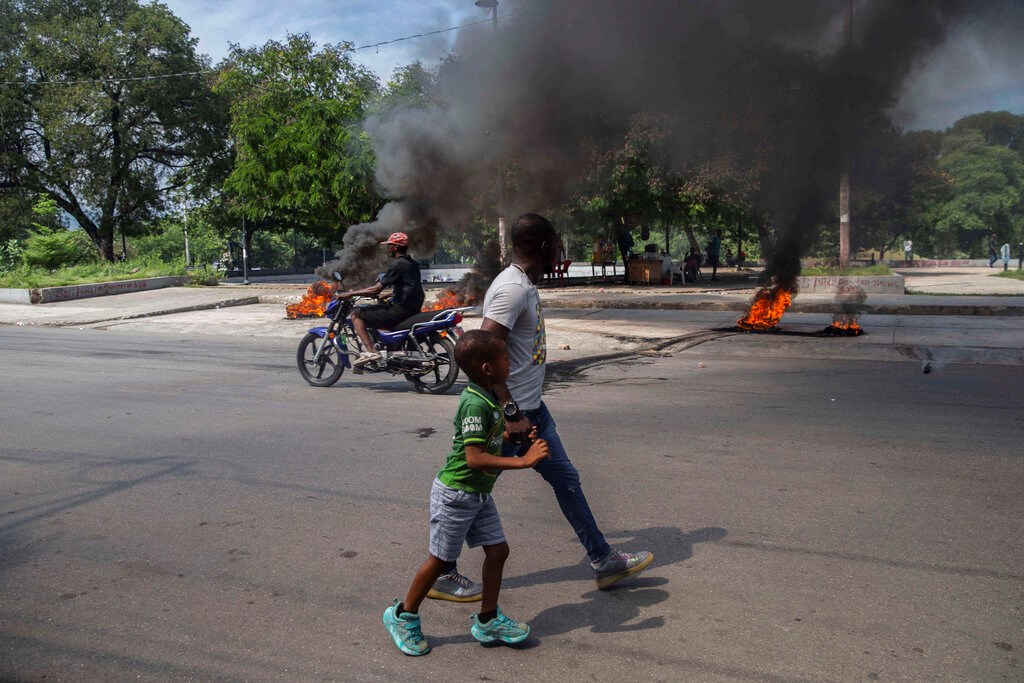 A man and a child walk by burning tires on a street in Port-au-Prince, Haiti on Sunday, October 17, 2021.

The spike in kidnappings and gang-related violence has forced Haitians to take detours around certain gang-controlled areas while others simply opt to stay home, which in turn means less money for people like Charles Pierre, a moto taxi driver in Port-au-Prince who has several children to feed.

“People are not going out in the streets,” he said. “We cannot find people to transport.”

A protest is scheduled for Monday to decry the nation’s lack of security.

The kidnapping of the missionaries comes just days after high-level US officials visited Haiti and promised more resources for Haiti’s National Police, including another $15 million to help reduce gang violence, which this year has displaced thousands of Haitians who now live in temporary shelters in increasingly unhygienic conditions.

“Political turmoil, the surge in gang violence, deteriorating socioeconomic conditions—including food insecurity and malnutrition—all contribute to the worsening of the humanitarian situation,” BINUH said in its report. “An overstretched and under-resourced police force alone cannot address the security ills of Haiti.”

On Friday, the UN Security Council voted unanimously to extend the UN political mission in Haiti.

Edner Jeanty, executive director of the Barnabas Christian Leadership Center, told CT of other kidnappings in the past few weeks. He said a deacon was shot and killed and his wife kidnapped as they were entering First Baptist Church in Port-au-Prince, across from the National Palace. And he said a pastor was kidnapped as he was officiating a wedding next to the courthouse in the capital’s Delmas commune, while another pastor and two others from the church were also taken away.

“The kidnapping of 17 Christian volunteers is a high-profile story,” said Jeanty. “It is unfortunate that it is also presented as the kidnapping of American citizens, as if American Christian lives mattered more than lives of Haitian Christians or the life of any human being created in the image of God.”