Plus, regular attendees trust their pastor’s vaccine advice more than almost any other source.
Kate Shellnutt|October 15, 2021 09:00 AM 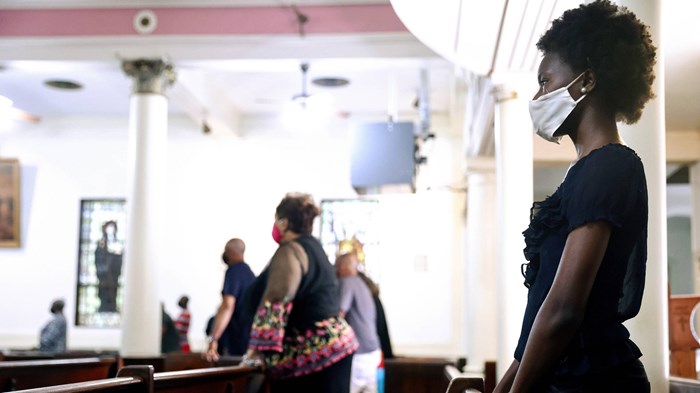 A year and a half into the coronavirus pandemic, most churchgoers think it’s finally safe to be back in the pews.

And despite prominent clashes over COVID-19 restrictions and vaccine exemptions, regular attendees largely agree with their congregations’ reopening plans and trust their church leaders’ advice on whether to get the shot, according to a survey released today by the Pew Research Center.

Those who go to church at least once a month were as likely to trust their church’s guidance as they were public health officials, the survey found. The only group they deemed more trustworthy was their own doctor.

“Overall, more Americans who attend religious services at least monthly express trust in their clergy and religious leaders to provide vaccine guidance than say the same about their state elected officials, their local elected officials or the news media,” the researchers wrote.

The findings back up the strategies of faith-based vaccine campaigns, which continue to urge leaders to share resources or speak about their decision to get the shot, whether from the pulpit or in one-on-one conversations with congregants. 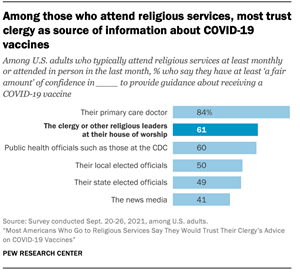 Across traditions, US churchgoers were far more likely to say their pastors encouraged (39%) rather than discouraged the vaccine (5%). But the majority said their pastors didn’t say much either way.

Black Protestants were most likely to hear pro-vaccine messages from church leaders; about two thirds say their church promoted vaccination. The topic came up the least among evangelical Protestants, with around three-quarters saying their pastors didn’t really weigh in about vaccination.

A previous report from Pew found that 83 percent of US congregations heard their pastor discuss the pandemic in their preaching last year.

Previous research showed how Black Protestants’ views and vaccination rates have shifted more dramatically than white evangelicals since vaccines were made widely available earlier this year. “There was a time that we were only talking about vaccine hesitancy in Black Protestant communities,” Curtis Chang, co-founder of Christians and the Vaccine, told USA Today in August. “Now, it’s really a white evangelical issue.”

Early on, some evangelical pastors wondered whether or how to discuss vaccination—some believing medical decisions are up to patients and their doctors, others happy to praise God for the development of a treatment that could help save lives. Many evangelical figures, including conservative Southern Baptist leader Robert Jeffress, have gone on to get the vaccine themselves and promote vaccination by hosting clinics. 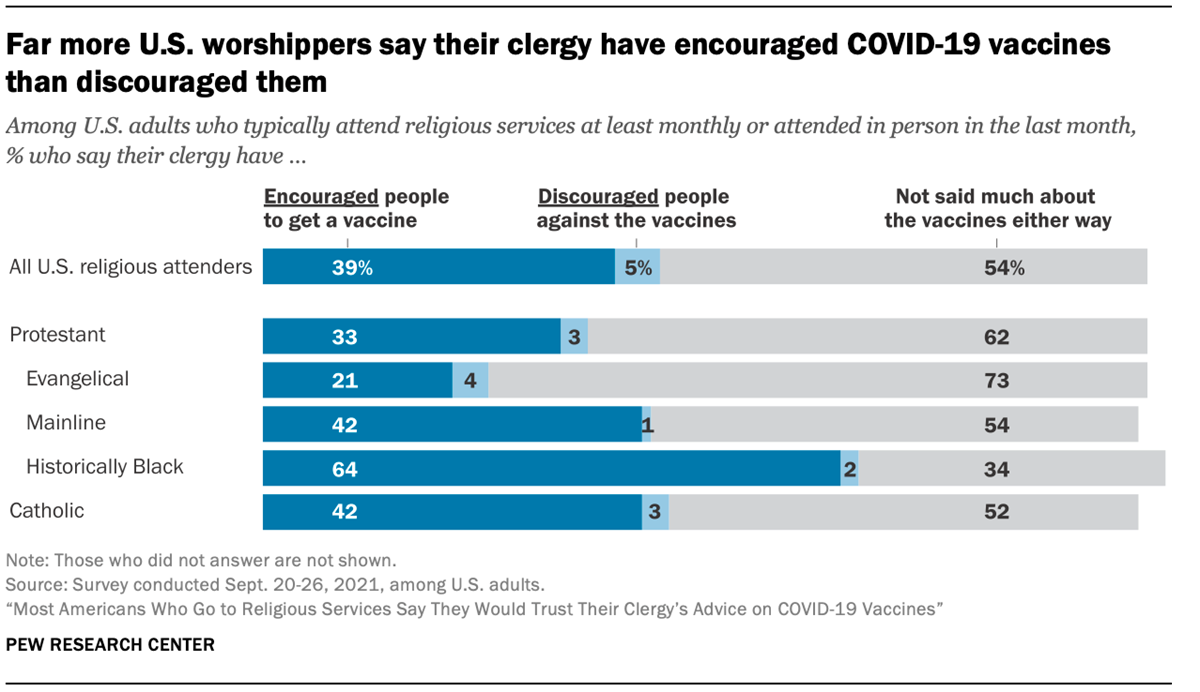 The topic remains a sensitive one, though, and some in the minority who say they will refuse the vaccine under any circumstances are starting to turn to religious exemption requests. Other surveys have shown white evangelicals are most likely to continue to refuse the vaccine; however, a majority had gotten the shot by June.

With higher vaccination rates and dropping coronavirus infections, 8 in 10 churchgoers are confident that they can worship in-person without catching or transmitting the virus, Pew found.

Two-thirds of regular churchgoers (64%) said in September that they had returned to in-person services in the past month, compared to 43 percent who had gone back in March 2021 and 33 percent in July 2020.

Evangelicals and Catholics were more likely to say they’d attended an in-person church service recently than mainline and Black Protestants, and churchgoers in the Northeast and Midwest were somewhat more likely to be back than those in the South and West.

Back in April, the Centers for Disease Control and Prevention began endorsing unmasked indoor worship for those who had been vaccinated. After the delta variant began taking off during the summer, it revised recommendations to say vaccinated people should wear masks in public indoor settings as long as there are high levels of transmission in the area. (As of October, that applies to almost the entire country.)

When asked what they believe should be happening with worship services at this point in the pandemic, more than half of regular churchgoers (59%) said their churches should be open with some precautions in place. That largely lines up with what is actually happening, since 59 percent said last month that their churches had reopened with precautions.

The number of still-closed churches continues to drop, down from 17 percent earlier this year and 31 percent last year.

Evangelicals are most likely to be worshiping in person without restrictions. Half say their churches are up and running as they were before the outbreak, compared to 20 percent of mainline Protestants, 14 percent of Black Protestants, and 19 percent of Catholics who say the same.