A Year After the Election, Trump’s Effect on Evangelical Churches Lingers

Political tensions in the pews have calmed, and another survey shows leaders’ Trump support yielded more positives than negatives for evangelicals.
David Roach|November 1, 2021 06:00 AM
简体中文繁體中文 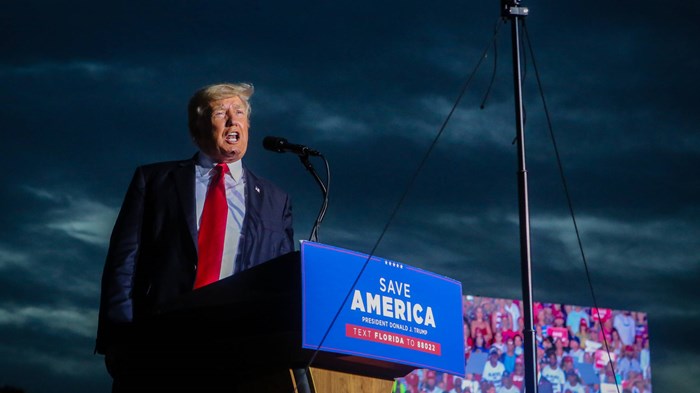 Political polarization has subsided in most American churches a year after the 2020 presidential elections. But there are notable exceptions to that trajectory, and new research has found lingering effects of evangelical support for former president Donald Trump.

The remnants of tension are evident at congregations such as Seattle’s Downtown Cornerstone Church, where pastor Adam Sinnett has been surprised “at how challenging it is to really cultivate unity amidst [our] political differences.”

In the youthful, mobile, and tech-savvy church, members who “leaned more toward the far left and the far right tended to have the most difficult time in this last season,” Sinnett said, “and they also were the ones that gravitated away from the church.”

The Seattle congregation’s experience aligns with data released this week by Heart and Mind Strategies, a research and consulting organization. A survey of 1,000 US adults conducted in August found some remaining sources of political strife for evangelicals.

The political strife the church has endured in recent years “shows the world that Jesus doesn’t really unite people like we say he does,” Sinnett said.

At Downtown Cornerstone, the political differences show up “in three primary spheres: personal relationships, small groups, and most pointedly around decisions of leadership” over whether to address social issues and whether to submit to the government on COVID-19 restrictions, among other issues.

“It’s somewhat of an indictment of the church that we are far more comfortable in our ideological circles than we are with people that have totally different political perspectives but worship the same Jesus,” Sinnett said.

Divides in many churches hit a breaking point in 2020, with heightened political polarization during Trump’s reelection campaign and pastors struggling to maintain unity over pandemic responses. In the aftermath of the contested election and the riot at the US Capitol, pastors even found themselves in conversations around conspiracy theories, fear, and truth.

Amid the tensions, some congregations clashed with their leaders, some pastors left their churches, some members went searching for a new church home, and some have taken a break from church life altogether.

But as the election recedes and pandemic outlooks improve, things feel a lot better in most churches than they did in 2020. The effects still linger, but the intensity of the debates have died down.

The question for analysts is whether the apparent calming of political tension among evangelicals stems from increased spiritual maturity or just the changing news cycle. Author and theologian Jonathan Leeman thinks it’s a combination of both.

“There are risks of dividing over things that are in the news,” said Leeman, coauthor of How Can I Love Church Members with Different Politics? “Now we’re not talking about a presidential election,” and the division is subsiding. “Everybody is talking about vaccines and mask mandates, so that’s where you’re going to feel the fissures.”

Still, Christians seem to be learning in 2021 to separate “whole church issues,” on which Christians must agree to be part of a congregation together, from “Christian freedom issues,” which are not as clear in Scripture, he said.

“At least a few more people are beginning to grab onto the idea of Christian freedom as a crucial doctrine that allows the temperatures of conversations to drop at least slightly,” said Leeman, editorial director at 9Marks in Washington, DC.

It can be hard to disagree over politics in church when so many believers see their vote and their political engagement as stemming from their Christian convictions and beliefs in right and wrong. Two-thirds of self-identified evangelicals, according to the Heart and Mind survey, say their faith influences their political beliefs, twice as many as Americans on average.

The majority of evangelicals (57%) believe their support of Trump in 2020 “showed moral courage to try and achieve policies and actions consistent with evangelical Christian values,” and more than a third of Americans overall agreed.

Most who identify as evangelicals or hold evangelical beliefs said evangelical stances on President Trump didn’t affect their church involvement either way. But for a sizable minority, it led them to become more engaged with their church and their faith.

Some evangelicals who objected to Trump during the 2016 election—such as Southern Baptist Theological Seminary president Albert Mohler—ended up backing him in 2020 based on his track record on religious liberty, abortion, and other issues. In the Heart and Mind survey, evangelicals who were white, over 55, and weekly church attenders were most likely to agree with such stances, believing Trump kept his promises to champion matters important to faithful Christians.

The evangelical critics of the former president, though, said Trump’s brash approach, as well as his remarks on women and immigrants, revealed a character at odds with Christian values. Pastors like Andy Stanley at Atlanta’s North Point Community Church worried evangelical association with Trump would hurt the church’s reputation and outreach. In the survey, a minority of evangelicals believed the same, concerned about the impact on evangelical credibility and Christian witness.

But surveys so far haven’t reported a significant impact on evangelical affiliation. The new findings from Heart and Mind align with data released last month by the Pew Research Center showing there was no mass exodus from evangelicalism during the four years of Trump’s presidency despite pockets of turmoil. In fact, affiliation grew thanks to Trump’s political supporters adopting the label.

While evangelicalism at large looks to have survived the Trump era without major fissures, division remains for some Black Christians.

The Heart and Mind Strategies poll found 64 percent of Black evangelicals identified with the sentiment that “evangelical leaders’ obsessive support of Trump coupled with his personal failings does more harm than good, tarnishing numerous causes.” An identical percentage of white evangelicals (64%) agreed that they supported Trump because “while not a perfect person, he championed matters important to faithful Christians.”

Those racial differences manifested themselves in the departures of several African American pastors from the Southern Baptist Convention (SBC) last year. Now Marshal Ausberry, immediate past SBC first vice president and immediate past president of the SBC’s National African American Fellowship, says the suburban DC congregation he pastors may leave the SBC this year.

Members of Antioch Baptist Church in Fairfax Station, Virginia, are “deeply, deeply concerned” over appearances the convention is “in bed with a particular [political] party,” he said.

The Trump administration “reopened” past wounds of racial trauma for African Americans and brought grown men to tears, Ausberry said. Over the past year, the situation “has not improved because anytime you experience pain or racialized trauma resurfacing, it takes time to heal.”

The Hispanic community seems to mirror the larger trend of political calming, according to Javier Chavez, a Georgia pastor and global studies professor at Truett McConnell University. The 2020 election cycle was “difficult” for Latinos due to the “political noise.”

In different parts of the country and among Latinos with different backgrounds, views clashed over the president. Some churches split over the election, and some Hispanic believers changed churches over politics, Chavez said.

This year, however, “is a different story.” Currently, “the discussion of political ideology is not really what is transpiring in my community,” said Chavez, pastor of Amistad Cristiana International, a Spanish-speaking, predominantly Mexican and Central American church in Gainesville, Georgia. “At this moment, the concern is economics: inflation, constant noise of an approaching economic crisis, housing prices.”

Amid the slowdown of election conflict, half (52%) of evangelicals agree they are “proud that some in the evangelical community are seeking to separate the gospel message from Trump and toxic politics,” according to the Heart and Mind Strategies survey.

Evangelicals under 35, people of color including Asians and Hispanics, and those living in the Mountain and Midwest areas were most likely to agree.

Many of them likely have their own leaders in mind. Self-identified evangelicals gave their pastors higher marks in their handling of the 2020 election than evangelical leaders in general.

Respondents were more likely to say evangelical leaders did a fair or poor job speaking about the presidential election (43%). When asked about their own pastor or church leader, though, just over half (51%) gave them positive marks.

David Roach is a freelance reporter for CT and the pastor of Shiloh Baptist Church in Saraland, Alabama.

A Year After the Election, Trump’s Effect on Evangelical Churches Lingers

A Year After the Election, Trump’s Effect on ...