The Alabama pastor, known for his inclusion of women and work on racial justice, beat out Mike Stone of the Conservative Baptist Network in a runoff.
Kate Shellnutt in Nashville|June 15, 2021 08:34 PM
简体中文繁體中文 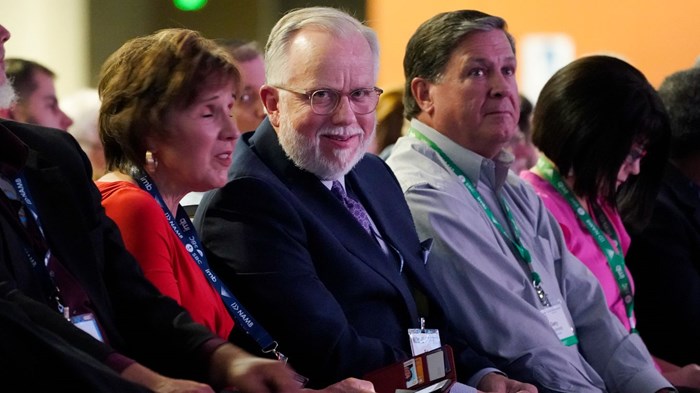 Pastor Ed Litton, championed by supporters as a force for gospel unity and racial reconciliation, was elected the next president of the Southern Baptist Convention (SBC), overtaking the candidate backed by a passionate faction of conservatives.

Litton’s election is seen as a signal of the direction of the nation’s largest Protestant denomination, where infighting has broken out over approaches to race, abuse, and other issues while the Conservative Baptist Network raises alarms about liberal drift and “woke” theology. The close race also reveals how much ground the vocal group has come to hold in the SBC within a year and a half of its founding.

“This vote … shows we desire a leader whose character, humility, and voice for unity represents us a whole over those who call for division,” said Jacki King, who serves on the steering committee for the SBC Women’s Leadership Network.

In a race with no clear frontrunner at a convention with a 25-year-high turnout of more than 15,000 messengers, Litton won out over Mike Stone, a pastor endorsed by fellow Conservative Baptist Network leaders, and Albert Mohler, the longtime president of Southern Baptist Theological Seminary.

Critics of the new network worried that if Stone won, that could cause the denomination to divide on political lines. They were also concerned about leaked letters alleging he resisted abuse response efforts while chair as the Executive Committee. Stone secured the highest level of support among candidates in the first round of voting and won 48 percent to Litton’s 52 percent in a runoff.

Litton is expected to carry on the priorities set forth by outgoing president J.D. Greear and said he would continue Greear’s efforts to appoint women and people of color to denominational committees. Both Litton and Greear use an approved alternate name for Southern Baptists, Great Commission Baptists, as a way to signify a commitment to mission over regional identity.

“We are Great Commission Baptists, and we’re called that for a reason,” Litton said. “Part of what I feel like God has called me to do in this office is to help us remember why we’re family, and what the focus and objective of our family is, which is to get the good news, the gospel of Jesus … to as many people as can hear it.”

Litton’s election followed a lively nomination speech from his friend Fred Luter, the first and only African American president of the SBC. Luter called Litton, pastor of Redemption Church in Saraland, Alabama, a “uniter” who has “uniquely shown his commitment to racial reconciliation.” Luter also said, “In the face of some very difficult and necessary conversation in our convention about abuse, Ed brings a very compassionate and shepherding heart.”

As debates and allegations around critical race theory roiled the SBC, Litton’s conversations with black pastors in his own community led him to speak out about racial justice on the convention level. He has led efforts for pastors in the Deep South to acknowledge and heal from their racist history and joined black pastors like Luter in opposing “any movement in the SBC that seeks to distract from racial reconciliation through the gospel and that denies the reality of systemic injustice.”

Soft-spoken with a short, white beard, Litton has pastored Redemption for 27 years and was a church planter in Arizona before that. He and his wife Kathy represent something of a Southern Baptist power couple. Kathy Litton served as a director with the North American Mission Board before becoming the first woman elected SBC registration secretary in 2019.

The couple also share a testimony rooted in tragedy. Ed Litton’s first wife died in a car crash 14 years ago, as did Kathy’s husband, who was also a Southern Baptist pastor. “We both have a profound sense of suffering and pain in our lives that has changed us, and we believe changed us for the better,” said Litton, quoting Psalm 34:18, that the Lord is near to the brokenhearted.

He spoke to reporters after his election, saying addressing “hurt and pain” requires “intentionality” by churches and describing how the gospel underscores his commitment to racial reconciliation and caring well for abuse victims.

Litton suggested the convention needs humility to listen to one another and come together around their foundational beliefs even though they disagree.

“This is a family, and sometimes families argue in a way that the neighbors get to see it. And that’s kind of what you’ve been witnessing,” he said. “But the reality is we’ll leave this place focused, with a direction, and I believe with a better direction for the future.

He criticized the Conservative Baptist Network in remarks to CT last year, saying, “Honestly, I do not understand why they exist. I do not know a single professor, seminary, or for that matter a single SBC pastor who does not wholeheartedly stand with the inerrancy of Scripture.”

The race showcased how influential the Conservative Baptist Network had become. As it held events online and in-person over the past year, the group rallied a campaign to get more churches to send messengers to this year’s convention to vote for Stone and push for stronger condemnation of critical race theory. Supporters turned out with stickers that said, “Stop CRT” and “Beat the Biden Baptists.”

“Tough beat,” tweeted Rod D. Martin, who serves on the SBC Executive Committee and endorsed Stone. “But it’s the work of a single year. We fought the entire denominational machine, plus all their MSM friends. We didn’t win. But this result shows we can.”

For others in the convention, though, Litton’s election signaled a clear win over the new network.

“Some elections are tight and some are blowouts,” said Griffin Gulledge, pastor of Madison Baptist Church in Madison, Georgia. “The margins doesn’t matter as much as the result. The result is an Ed Litton presidency, a commitment to racial reconciliation and abuse reform. That should encourage any and every Southern Baptist, and it encourages me.”