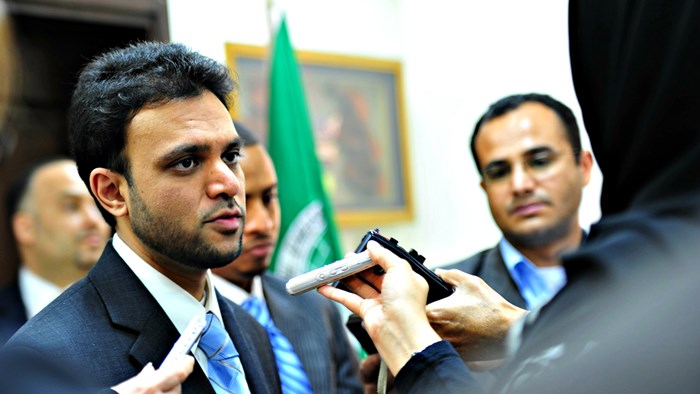 The White House announced Friday a slate of nominations and appointments for top religious affairs roles, including the first Muslim American nominated to be the US ambassador-at-large for international religious freedom (IRF).

President Joe Biden will select Rashad Hussain as his nominee for that post, filling a State Department slot vacant since former Kansas governor and US Senator Sam Brownback—who co-chaired a bipartisan IRF summit for 1,200 attendees this month—left at the close of the Trump administration.

Hussain, who would need to be confirmed by the Senate, currently works as director for Partnerships and Global Engagement at the National Security Council. He previously served as White House counsel under President Barack Obama, as well as US special envoy to the Organization of Islamic Cooperation (OIC) and US special envoy for the Center for Strategic Counterterrorism Communications, among other roles.

Knox Thames, who served as the State Department’s special advisor for religious minorities during both the Obama and Trump administrations, told CT that Hussain was “a strong pick.”

“He knows human rights and cares about religious freedom,” said Thames. “I saw firsthand how he raised these issues when he served as [OIC envoy]. I know he’ll be able to hit the ground running from day one to combat religious persecution.”

Judd Birdsall, a senior research fellow at the Berkley Center for Religion, Peace, and World Affairs at Georgetown University who served with Hussain at the State Department from 2009–2011, told CT that the nomination is a “fantastic choice” because Hussain has “impeccable credentials, extensive diplomatic and legal experience, and unique credibility as a Muslim American.”

“I greatly respected his thoughtful, humble, and capacious approach to all things religion and diplomacy, including the promotion of religious freedom,” said Birdsall. “He understands the religious minority experience and is a passionate advocate for all those who suffer on account of their beliefs.”

Also noteworthy is the speed of the nomination, coming at a similar pace to President Donald Trump’s selection of Brownback as IRF ambassador after just six months.

“The most tangible measure of an administration’s commitment to international religious freedom is the quality of its IRF ambassador nominee and the speed with which it makes that nomination,” Birdsall told CT. “Whereas President Bush took 14 months to announce his nominee for the job and Obama took 17, Biden is strongly signaling his commitment to the issue by taking only seven months to announce an outstanding nominee.

“By nominating a Muslim to serve as IRF ambassador, the Biden administration is decisively turning the page on an era in which a perception of anti-Muslim sentiment undermined the nation’s reputation on religious freedom,” he said. “Rashad Hussain will help to restore America’s credibility as a champion of tolerance and inclusion.”

“The task of advancing religious freedom is best done when all faiths work together,” James Chen, vice president of global operations at the Institute for Global Engagement, told CT. “So the Biden administration’s appointment of Mr. Hussain … is encouraging to see.”

Bob Roberts, global senior pastor of Northwood Church and founder of Multi-Faith Neighbors Network, told CT he was “so excited” for Hussain’s nomination.

“He will be incredible. He’s a wise man of character,” said Roberts. “Him being a Muslim is a very positive thing, in that he will be able to walk into sensitive places in the world and be unparalleled in his ability to understand, speak to issues, and challenge right actions.

“We’ve had Christians in that role and a rabbi in David Saperstein,” he said. “A Muslim is a good choice.”

“President Biden’s appointment of a Muslim [IRF ambassador] is a reminder that the US position on religious freedom has always been for people of all faiths and even for those who express no particular faith,” Randel Everett, founder and president of 21Wilberforce, told CT.

Elijah Brown, general secretary and CEO of the Baptist World Alliance, told CT that the nomination is a “strategic development” because Hussain “brings a depth of experience across all three branches of the US government and a wide array of faith-based initiatives including Baptist-Muslim conversations.

“I join with many others in urging Congress to quickly confirm [him] to this ambassadorship,” he said, “as many—especially in light of the ongoing global pandemic—face unprecedented restrictions as they seek to live out their faith convictions.”

Jeremy Barker, the Erbil-based Middle East program director at the Religious Freedom Institute, told CT that Hussain is “a great choice” who has “done serious security and diplomatic policy work which will be vital in advancing religious freedom within an administration that had said it wants to prioritize human rights within its foreign policy.

“He is also a person of faith who takes his own religion seriously and understands that religious persecution strikes at something fundamental to an individual or community,” said Barker.

“International religious freedom has been and should remain an issue with overwhelming bipartisan support. The Senate should move quickly to get Mr. Hussain confirmed and in the job,” he said. “The work is too important to be left undone and the Biden administration is to be commended for putting a qualified nominee forward early in the process.”

Biden is also expected to nominate Deborah Lipstadt as the next US special envoy to monitor and combat antisemitism. Lipstadt is a professor at Emory University in Atlanta and a prominent Holocaust historian.

She is the author of Antisemitism: Here and Now and is known for successfully defeating a libel suit brought against her by Holocaust denier David Irving.

“We are greatly heartened by the anticipated announcement of Prof. Lipstadt to continue our nation’s fight against antisemitism both here and abroad,” said Mark (Moishe) Bane, president of the Orthodox Union. “She is a leader with great moral courage; her dedicated work, clear voice in fighting Holocaust denial and preserving the memory of the attempted destruction of the Jewish people make her an exemplary choice for this role.”

Lipstadt, who would have the rank of ambassador, also requires Senate confirmation. The anticipated announcement follows a May 24 letter from several leading Jewish organizations calling on President Biden to address the recent rise in antisemitic attacks.

“The presence and efforts of an Ambassador to Monitor and Combat Antisemitism send a powerful signal to governments around the world that the U.S. takes combating antisemitism seriously and calls on them to do the same,” the letter said.

“President Biden is to be congratulated for having moved relatively quickly in nominating people for religious freedom related posts,” Paul Marshall, a veteran IRF scholar and author and the religious freedom chair at the Institute for Studies of Religion at Baylor University, told CT. He noted that Lipstadt is “a skilled veteran” and that Hussein’s envoy roles had “shown both his abilities and his commitment to religious freedom.”

“Having a Muslim in the religious freedom ambassadorship may allay the canard that this is simply a sop to the religious right,” said Marshall, currently a senior fellow at the DC-based Religious Freedom Institute and the Jakarta-based Leimena Institute.

Nadine Maenza, chair of the US Commission on International Religious Freedom (USCIRF), applauded the two nominations.

“We look forward to working closely with [them] to develop new ways for the United States to promote the freedom of religion or belief around the world,” she stated in a press release. “Global religious freedom violations continue to be a pervasive threat to our national security and global stability. [They] play an essential role in US efforts to counter that threat.”

Khan became famous in 2016 when he and his wife, Ghazala, spoke during the Democratic National Convention as “Gold Star” parents, discussing their son, Humayun, a US Army captain who died in Iraq in 2004.

Khan, a Harvard-educated Muslim immigrant, directly challenged then-candidate Trump’s proposal to ban residents of Muslim-majority countries from entering the United States, accusing the business mogul of having sacrificed “nothing—and no one.”

“Let me ask you, have you even read the United States Constitution? I will gladly lend you my copy,” Khan said as he held aloft a worn booklet containing the text of the document.

Khan, the founder of the Constitution Literacy and National Unity Project, runs his own law practice and has authored three books, including Founding Documents of the United States of America.

Kleinbaum, for her part, already served as a USCIRF commissioner in 2020 and leads the Congregation Beit Simchat Torah in New York City, a community that centers LGBT people. A human rights advocate, she also sits on Mayor de Blasio’s Faith Based Advisory Council and serves on New York City’s Commission on Human Rights. In addition, she is a board member of the New York Jewish Agenda and the New Israel Fund.

“Today’s announcement underscores the President’s commitment to build an Administration that looks like America and reflects people of all faiths,” stated the White House.

“Rashad Hussain is a well-qualified nomination with a deep understanding of the factors at play in China, India, and elsewhere,” he said. “We look forward to building together the diverse coalition of leadership necessary to counter the rising tide of religious persecution worldwide.”

In a later press release, Open Doors welcome all four selections, stated Hussain’s “expertise could play a major role in addressing some of the most challenging issues facing Christians, especially in the Middle East and West Africa,” and called on Senator Mitch McConnell to “fill the last remaining vacancy [at USCIRF] in a timely manner.”

Former USCIRF commissioner and spokesman for President Trump’s evangelical advisers Johnnie Moore congratulated Hussain and the other appointees and told CT he’ll “look forward to collaborating with each of them in order to advance the freedom of religion and belief around the world.

“There will, as always, be divergent points of view on certain ideas, policies, and strategies, but international religious freedom continues to be—and must remain—almost entirely bipartisan,” he said. “In fact, it must be nonpartisan. I intend on doing my part to keep it so.”

Kori Porter, CEO of CSW USA, told CT she “warmly welcomes” Hussein and his “excellent track record speaking out in support of religious minorities and against laws that violate freedom of religion or belief, including blasphemy laws.

“His nomination is an encouraging sign of the importance that the Biden administration places on religious freedom, which is particularly welcome as the world tackles the pandemic and worsening inequalities and rights violations,” she said. “We hope that Mr. Hussein will build on the excellent work of former ambassadors, particularly Ambassadors Saperstein and Brownback, in raising the profile of this fundamental human right.”

Thomas Schirrmacher, secretary general of the World Evangelical Alliance (WEA), told CT the alliance has had “great experience with Muslim friends filling strategic religious freedom positions,” such as Ahmed Shaheed, the current UN Special Rapporteur on Freedom of Religion or Belief (interviewed by CT here). The WEA is currently “building a strong global alliance with major Muslim actors who fight for religious freedom,” he said, evidenced by a joint statement and book release with Indonesia’s Nahdlatul Ulama (NU) at a DC event adjacent to Brownback’s IRF summit.

“With Rashad, we get one of the most experienced diplomats in dealing with concerned governments, so there is no need for him to warm up,” said Schirrmacher. “He can start to change things tomorrow.”