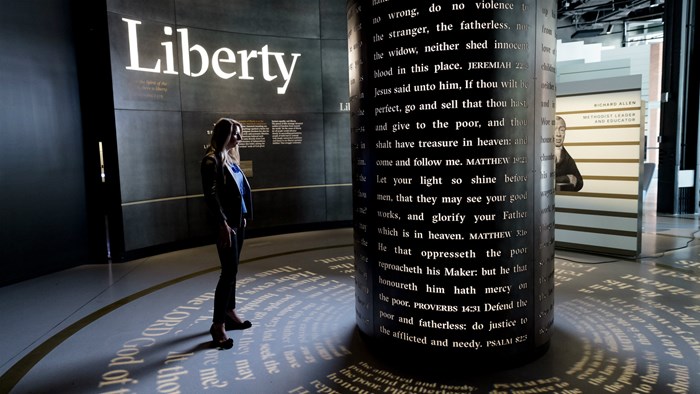 America’s “most historic square mile” got a new resident on the Fourth of July weekend. Joining the Liberty Bell and Independence Hall in Philadelphia, the American Bible Society has opened a $60 million museum to highlight the role of Scripture in the founding of the United States.

“We are leveraging history to advocate for the Bible,” said Alan Crippen, chief of exhibits at the Faith and Liberty Discovery Center (FLDC). “The American story of liberty is unintelligible without knowledge of the Bible, and how it impacted our leaders.”

The new museum gives special space to William Penn and his “holy experiment” of Pennsylvania.

Alongside his Bible, the museum displays an original copy of Penn’s 1683 pamphlet, The Great Case of Liberty of Conscience Once More Briefly Debated and Defended. Informing Penn’s vision for governance, the charter of Pennsylvania guaranteed religious freedom and sought peace with the local Lenni-Lenape Native American tribe.

The exhibits pose additional questions for contemplation or group discussion. The First Amendment section prompts: Do you agree that a just society requires freedom of religion and dissent? Another follows George Whitefield and asks: Do you agree that people can have a direct and personal relationship with God?

“Exhibits are meant to be immersive, but not to proselytize,” said Crippen. “This question is meant to pull the viewer into the logic of the Great Awakening.”

The museum makes it clear, though, that the Bible played a pivotal role in the development of democratic ideals. After the faith section of the museum, the liberty section starts with a pillar of scripture verses and expands concentrically with the stories of 21 “change makers.”

One is Jeremiah Evarts, a 19th century missionary and advocate for Native American rights. Others featured in the exhibit are abolitionist Sojourner Truth and the Catholic labor leader Cesar Chavez.

But it is the “Justice” exhibit that fully draws out the biblical tension in American history. A burnt wood display and jagged edges communicate disorientation and point to the fact the Bible has been claimed and appropriated by all sides in the unfinished task of liberty.

Slavery, women’s emancipation, and American exceptionalism are featured examples, though current social and political controversies are not addressed.

As videos of historical figures weigh in on biblical themes, however, they are interspersed with visitor contributions. All are invited to record their reflections in a private booth, which will later vetted and included in the display—no matter the political opinion.

“We did not build this center for Christian people,” said Crippen. “But we want people to appreciate the Bible and its role in cultivating the virtues necessary to sustain US democracy.”

For too many Americans, he said, liberty is libertarianism. And for many justice has lost its biblical clarity, replaced by anger, violence, and ideology.

The Bible used to be called “the Good Book,” he explained, but today it is frequently seen as a text full of fanciful stories and outdated morals—even hate. The ABS, founded in 1816, says there are 10 million more skeptics than Bible-engaged people in the US.

The issue has been a major focus of ABS since they moved to Philadelphia in 2015. The museum is massive investment to address the Bible’s “branding problem.”

It was designed by the same firm that spearheaded New York City’s 9/11 Memorial and Museum and exhibits aim to appeal to people who are more comfortable scrolling TikTok than reading a book.

Throughout the museum, a key phrase is repeated. It was coined by Crippen’s team: “Faith guides liberty toward justice.”

It is not simply a spiritual message.

The center is informed by 30 historians, religious experts, and legal scholars representing a range of ideological positions, to ensure accuracy of the exhibits.

“One would expect they tend to think that the Bible has had a valuable, if contested, role in American history,” said Thomas Kidd of Baylor University, one of the endorsing scholars. “But unlike some scholarly groups, this one seeks to be diverse.”

Many of their writings are for sale alongside typical mementos in the gift shop. The shop also sells Faith and Liberty Bible, an ABS study guide with 810 articles and quotations to illustrate 400 years of American connection to Scripture.

“There are many ways to read the Bible,” it states. The Bible can be seen as a civic text, ancient history, literature, and moral science. But the ABS study guide also includes an invitation: “Discover how the Bible can transform your own life.”

The “Hope” exhibit in the museum provides examples.

Moving from history to sociology, individual screens tell the stories of struggling marriages, wounded veterans, and Sudanese refugees. Artifacts in this section include Helen Keller’s Braille Bible, a child’s crutch from CURE International, and Shabbat candlesticks brought to the US by Jewish immigrants from Ukraine in 1913.

As visitors complete the tour, they exit with a highlighted view of Mikveh Israel, the oldest synagogue in the United States, dating to 1740. Albert Gabbai, a rabbi at the synagogue, called the FDLC a “wonderful, non-judgmental, and enriching” way to explore the Bible.

“We don’t have to shy away from discussing the biblical influences on the Founding Fathers,” said Jeffrey Rosen, president of the National Constitution Center. “Starting with Thomas Jefferson, all the framers believed people were born with certain inherent rights that came from God or nature, rather than government.”

The president of the Independence Visitor Center is similarly positive.

“The compelling story of the Bible’s influence shows its integral relation with the birth of American democracy,” Jim Cuorato said. “It is an added value to the Philadelphia experience.”

A five minute walk west of the museum, visitors can see the engraved words on the Liberty Bell, taken from Leviticus: “Proclaim liberty throughout all the land, unto all the inhabitants thereof.” Without biblical literacy, many are unaware of the verse’s connection to the Year of Jubilee and its radical vision of freed slaves and economic liberation.

But the FLDC is clear: Copious scriptural references have fallen short, and have been misused throughout American history.

“Why did oppressors use the Bible? Because it was culturally useful,” said Crippen. “But who stood up to them? The ones who were using it rightly.”

“We hope that as you step into this journey of exploration,” said Patrick Murdock, FLDC executive director, “you will discover that these stories of great Americans—and the values they embraced—remain the values that unite us today.

“And we hope these values are an inseparable part of your story, too.”

New Museum Stakes Claim for the Bible in US ...