One is known for his involvement in racial reconciliation efforts, and the other is a founding member of the anti-“woke” Conservative Baptist Network.
Kate Shellnutt|January 19, 2021 07:33 PM 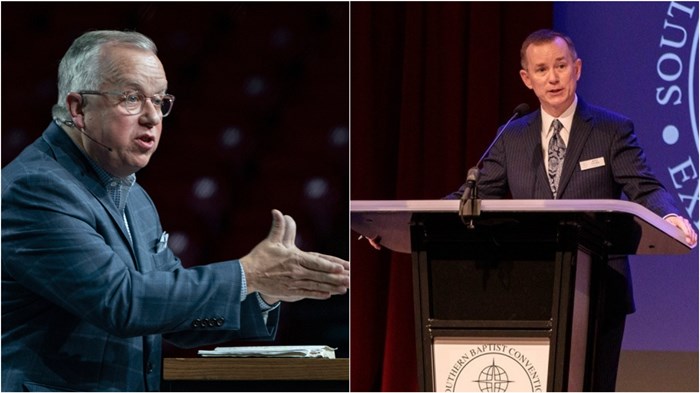 Albert Mohler has new competition in the race to become the next president of the Southern Baptist Convention.

Two pastors, Ed Litton and Mike Stone, accepted upcoming nominations in the past week, each representing different emphases for the future of the SBC as the denomination grapples with an escalating debate over its approach to race.

Mohler has been in the running for over a year; the SBC canceled its previous election along with its 2020 annual meeting due to COVID-19.

Mohler is already a big name in the SBC. The president of the Southern Baptist Theological Seminary in Louisville, he’s currently the longest-serving entity head in the denomination and regularly weighs in on current issues on his daily podcast, The Briefing.

But with that platform and prominence has come controversy, especially in recent months. Southern Baptists and evangelical onlookers saw the former Never Trumper endorse the president for reelection, decry Trump’s role in the attempted insurrection, and defend his decision to vote for him. He also led seminary presidents in a letter condemning critical race theory as incompatible with SBC beliefs.

“Dr. Mohler’s shifting positions on political issues have left a significant number of Southern Baptists dissatisfied with his candidacy,” said Dave Miller, editor of the SBC Voices blog and a pastor in Iowa. “Others feel he has enough power and control already and does not need to add SBC president to his other positions of power.

Stone, a senior pastor in South Georgia and former chairman of the Executive Committee of the SBC, was named as a contender last week. He immediately garnered endorsements from Tom Ascol, president of Founders Ministries, and Gerald Harris, retired editor of the Christian Index who, like Stone, belongs to the steering council of the Conservative Baptist Network.

Founders and the Conservative Baptist Network have been among the most vocal challengers to what they see as the influence of critical race theory and social justice in the denomination. Stone acknowledges that, “the convention, at least on paper, is squarely within the mainstream of conservative theology,” but along with other network members has voiced concerns about “woke” beliefs in SBC entities and seminaries.

Litton was among the group of white and black pastors who issued a joint statement on the gospel, reconciliation, and justice last fall, and both he and Luter signed onto a recent statement “in opposition to any movement in the SBC that seeks to distract from racial reconciliation through the gospel and that denies the reality of systemic injustice.”

“I have known Ed Litton for over 20 years. Our relationship started when we preached for each other as part of the SBC Racial Reconciliation Sunday during the month of February,” Luter, who led the SBC from 2012 to 2014, told Baptist Press. “From there our relationship developed to more than just colleagues to bring races together. We both shared the hope of drawing people closer to a relationship with Jesus Christ and then growing disciples for Christ. In both of our churches our focus has been the same all of these years.”

The Convention will vote on the candidates at its annual meeting in Nashville in June, installing officers for two-year terms. While SBC churches are self-governed, the president wields influence by setting missional priorities for the denomination, serving as a figurehead and spokesperson, and appointing committee members.

Outgoing president J. D. Greear made headway during his term by addressing sexual abuse and diversity. He offered new initiatives to address sexual abuse in the wake of a massive report on incidents within SBC churches, affirmed black lives matter, and appointed the most diverse slate of committee members in SBC history.

Now, the denomination will look to Greear’s successor to either build on his efforts or set new priorities; experts in SBC polity generally say it takes two presidential terms to make a lasting impact on the direction of the organization.

All candidates see the need for the declining denomination to improve evangelism and build up membership and giving; the 14.5 million-member convention has been shrinking for years and saw its biggest decline in a century in 2019.

Stone has emphasized the sufficiency of Scripture and the role of everyday Southern Baptists in convention business—two of the biggest concerns raised by the Conservative Baptist Network.

“I … want to champion the sufficiency of Scripture. It is a doctrine Southern Baptists have long held, but recently there are uncertain sounds about this issue that are originating in many corners of the Convention,” Stone told the Baptist Message. “I want to foster greater involvement of grassroots Southern Baptists. We acknowledge ecclesiastically that we are not a top-down hierarchy. However, increasingly, we are being led by smaller and smaller groups of decision makers.”

Stone, who leads Emmanuel Baptist Church in Blackshear, Georgia, stepped down as Executive Committee chairman in February 2020, just as the Conservative Baptist Network was formed. He faced backlash for his efforts last year to nominate subcommittee chairmen during his final meeting rather than allowing the incoming chair—the first black pastor to hold the position—to do so. In a response, he shared an explanation and critiqued the “cancel culture of today’s SBC social media.”

Stone also served on the committee tasked with recommending whether a church should disfellowship with the SBC due to abuse, racism, or theological violations alongside Litton’s wife, Kathy, who is a director at the North American Mission Board and the first woman elected registration secretary in SBC history.

Stone said he spoke to Mohler last week about entering the race. While he doesn’t see his candidacy in opposition to any others, Stone said, “I truly feel the SBC will be best led by a pastor. With deep gratitude for an entity leader’s influence, the SBC is a convention of churches and needs leadership that is daily in tune with the local church.”

Mohler, who also became president of the Evangelical Theological Society last year, accepted his 2021 candidacy back in October. At the time, he said to the Southern Baptist Texan:

Anything that has happened in the last several months has only amplified the reasons I was willing this year to be nominated and now next year since the convention was delayed. I think Southern Baptists face some incredible challenges and some very real issues, and I think we need to have the kinds of conversations that will clarify issues and bring Southern Baptists together.

Litton, lead pastor of Redemption Church in Saraland, Alabama, has been a critic of the Conservative Baptist Network, telling CT last year, “Honestly, I do not understand why they exist. I do not know a single professor, seminary, or for that matter a single SBC pastor who does not wholeheartedly stand with the inerrancy of Scripture.” In the Baptist Press report about his planned nomination, he spoke up about the need for Southern Baptists to reemphasize their common mission.

“Recently, I shared with my church, ‘A deeply divided nation needs a deeply united church,’” he said. “Simply and honestly, we are not there as a convention of churches. I fear our credibility is faltering. While the world waits deeply in need of Jesus, we have seen division grow in our SBC family. We have been blessed as Southern Baptists with strong churches, strong pastors, leaders and theologians, but what we need is a broken and contrite heart. We need to reemphasize our common mission, committed together and following Jesus.”