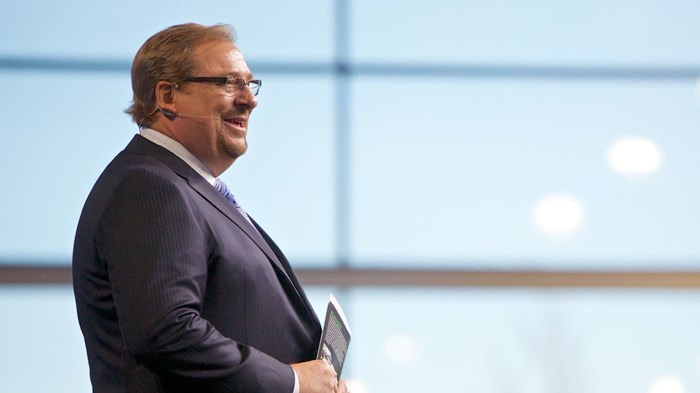 The video has been removed, but Michelle Ami Reyes, vice president for the Asian American Christian Collaborative, on Twitter described it as using Asian culture “as a prop for slapstick humor.” The video, she said, blurs and dishonors “distinctions and categories of Asian culture.”

In it, she said, a pastor wears a Chinese shirt, makes Kung Fu sounds and pretends to make sushi that he then spits out.

“There are layers to the problematic appropriation and use of Asian culture elements for slapstick humor here. This kind of humor only works because it’s deprecating. But you cannot appropriate and deprecate on someone else’s culture for your own personal comedy,” she tweeted.

Warren, in a statement issued Sunday, apologized and said he was upset and embarrassed by the racially offensive content of the video. It was immediately taken down, he said.

“My instant fear was that the thousands of Asian American children who are a part of our church family would feel made fun of and that their families and so many others would rightfully be offended,” Warren said in the statement.

Although the video was posted this weekend, Warren said it was created four years ago.

“This is the very kind of cultural and racial insensitivity that we’re trying to eradicate in our church family,” he said. “It’s unchristlike, demeaning, and it’s never appropriate to use a stereotype to teach.”

Some have responded well to Warren’s apology on Twitter, saying his words were genuine and thoughtful. Others were reminded of a photo he posted on Facebook in 2013 that depicted a Red Guard during China’s Cultural Revolution.

“The typical attitude of Saddleback Staff as they start work each day,” the caption read. Several Asian American Christians found that post distasteful, including writer Sam Tsang who took the issue to his blog.

Warren initially said people missed the irony, saying in a Facebook comment: “It’s a joke people! If you take this seriously, you really shouldn’t be following me!” He later took the photo down and apologized on the comments section of Tsang’s blog.

This also isn’t the first time children’s ministry material has been called out for its use of cultural stereotypes.

Vacation Bible school curricula have often used themes based in foreign countries, but these programs have been facing heavier scrutiny as awareness and sensitivity around cultural appropriation increases.

In 2013, former president of Lifeway Christian Resources Thom Rainer apologized for a 10-year-old Asian-themed vacation Bible school curriculum, dubbed “Far Out Rickshaw Rally — Racing Towards the Son,” that was criticized for promoting racial stereotypes, according to the Baptist Standard.

The curriculum package, the Baptist Standard detailed, “came in a tin shaped like a Chinese-food take-out box, and the chorus to its theme song alluded to a scene in the 1984 movie The Karate Kid.”

In 2019, Christian publisher Group Publishing faced pushback for its Africa-themed children’s Bible school curriculum that, according to Faithfully Magazine, had children pretending to be Israelite slaves and mimicking an African dialect with “clicking” sounds. Group Publishing revised and apologized for the curriculum.

Warren, in his statement, said the church has put a process in place “to ensure that any curriculum that might be insensitive, hurtful, or demeaning never sees the light of day.”

“Better yet, don’t include segments that make fun of other people’s cultures at all in your teaching materials. It’s disrespectful and dishonoring,” she said.