(UPDATED) Armenian evangelicals praise first US president to formally use word to describe 1915 massacre by Ottoman Turks.
The Associated Press and CT|April 24, 2021 02:45 PM 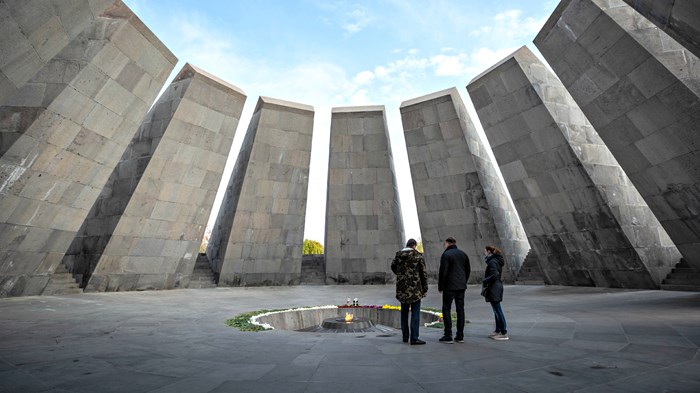 The systematic killing and deportation of hundreds of thousands of Armenians by Ottoman Empire forces in the early 20th century was “genocide,” the United States formally declared on Saturday, as President Joe Biden used that precise word after the White House had avoided it for decades for fear of alienating ally Turkey.

Turkey reacted with furor, with the foreign minister saying his country “will not be given lessons on our history from anyone.” A grateful Armenia said it appreciated Biden’s “principled position” as a step toward “the restoration of truth and historical justice.”

Biden was following through on a campaign promise he made a year ago Saturday—the annual commemoration of Armenian Genocide Remembrance Day—to recognize that the events that began in 1915 were a deliberate effort to wipe out Armenians.

While previous presidents have offered somber reflections of the dark moment in history, they have studiously avoided using the term genocide out of concern that it would complicate relations with Turkey, a NATO ally and important power in the Middle East.

But Biden campaigned on a promise to make human rights a central guidepost of his foreign policy. He argued last year that failing to call the atrocities against the Armenian people a genocide would pave the way for future mass atrocities. An estimated 2 million Armenians were deported and 1.5 million were killed in the events known as Metz Yeghern.

“The American people honor all those Armenians who perished in the genocide that began 106 years ago today,” Biden said in a statement. “We affirm the history. We do this not to cast blame but to ensure that what happened is never repeated.”

Rene Leonian, president of the Union of Armenian Evangelical Churches in Eurasia, told CT he “salutes the courage” of the US president.

“Biden will open a new page for the American nation. This new page will also allow other countries to follow his example,” he said. “I deeply hope that in the future, the Turkish State will do an in-depth work collectively with its own people, to acknowledge the guilt of the Turkish authorities of 1915.”

“In a Christian spirit, reconciliation is possible when the culprit recognizes his fault, regrets, and asks for forgiveness,” Leonian told CT. “What is impossible for men is possible for God! I believe that through prayer, patience, and perseverance, we will get there.”

“Late recognition is naturally better than no recognition. However, for me the use of the term genocide in a statement is not a simple sound bite,” he said. “It is a commitment to justice, and those who have recognized genocide as a historical fact must know that this is not a posthumous medal on a coffin; rather, a commitment for pursuing the matter in various ways, academic, political, curricular, economic, etc.”

Haidostian described how he has expected a US pronouncement every year of his adult life, as has the wider Armenian diaspora.

“Having to wait year after year for 106 years for presidents or parliaments of countries of the world to remember and call the atrocities in the proper way has been painful and has represented the defeat of a sense of justice in the face of political strategy,” he told CT.

“Armenian advocacy is not a political act or maneuver. It is the voice of the Armenian heart that has ached for so long.”

Armenian Prime Minister Nikol Pashinyan said in a letter to Biden that recognition of the genocide “is important not only in terms of respecting the memory of 1.5 million innocent victims, but also in preventing the repetition of such crimes.”

“We reject and denounce in the strongest terms the statement of the President of the US regarding the events of 1915 made under the pressure of radical Armenian circles and anti-Turkey groups,” stated the Turkish Foreign Ministry.

In the past, Turkey has acknowledged the deaths and displacement of Armenians as a tragedy. Yet the admission is often couched within a context of international meddling and Armenian agitation, during a time of Ottoman weakness.

This stance is offensive to Harout Nercessian, the Armenian Missionary Association of America representative in Armenia.

“Euphemizing a genocide into wartime collateral damages is a lie,” he told CT. “It is sinful and immoral.”

Getting Turkish recognition of the genocide is the ultimate goal, said Nercessian. This would involve an official apology, and then “amends and reparations.”

But minutes before Biden’s announcement, Turkish President Recep Tayyip Erdoğan sent a message to the Armenian community and patriarch of the Armenian church calling for not allowing “the culture of coexistence of Turks and Armenians … to be forgotten.” He said the issue has been “politicized by third parties and turned into a tool of intervention against our country.”

The answer, said Garo Paylan, an Armenian member of Turkey’s parliament, is to preempt them.

During a telephone call Friday, Biden had informed Erdoğan of his plan to issue the statement, said a person familiar with the matter who was not authorized to publicly discuss the private conversation and spoke on the condition of anonymity.

The US and Turkish governments, in separate statements following Biden and Erdoğan’s call, made no mention of the American plan to recognize the Armenian genocide. But the White House said Biden told Erdoğan he wants to improve the two countries’ relationship and find “effective management of disagreements.” The two also agreed to hold a bilateral meeting at the NATO summit in Brussels in June.

Further progress will depend on more than US recognition, Nercessian said. But Biden showed moral leadership.

“God is the God of the weak and expects the strong to stand up for the rights of the defenseless,” he told CT. “America stood up for justice, and that is pleasing to God.”

In Armenia on Saturday, people streamed to the hilltop complex in Yerevan, the capital, that memorializes the victims. Many laid flowers around the eternal flame, creating a wall of blooms seven feet high.

Armenian Deputy Foreign Minister Avet Adonts, speaking at the memorial before Biden issued his statement, said a US president using the term genocide would “serve as an example for the rest of the civilized world.”

Hrayr Jebejian, the Armenian director of the Bible Society of the Gulf, told CT he was “happy” and “encouraged” because he had expected Biden to dodge such a pronouncement at the last minute, as other US presidents have done before.

“The timing of this endorsement is very important because of the geopolitical situation,” he said, citing the recent 44 days of conflict in Artsakh—the Armenian name for Nagorno-Karabakh—that resulted in Azerbaijan regaining control of much of the disputed territory.

“We were so demoralized, we were seeing the whole world as black,” said Jebejian of the Armenian nation. “At this juncture of our history, [Biden’s statement] boosts our morale and paves new opportunity for our cause.”

He hopes that Armenian activists can capitalize on the opportunity and push for more justice via international tribunals. But he doesn’t expect any progress on reconciliation.

“You need two hands to clap,” Jebejian told CT. “If Turkey continues in denial, we cannot do much more [on reconciliation]. But as Christians we need to push for justice.”

Lawmakers and Armenian American activists had lobbied Biden to make the genocide announcement on or before remembrance day. The closest that a US president had come to recognizing the World War 1-era atrocities as genocide was in 1981 when Ronald Reagan uttered the words “Armenian genocide” during a Holocaust Remembrance Day event. But he did not make it US policy.

Armenian Orthodox Leader: ‘We May Forgive One Day ... But We Will Never Forget.’

California is home to large concentrations of Armenian Americans.

Salpi Ghazarian, director of the University of Southern California’s Institute of Armenian Studies, said the recognition of genocide would resonate beyond Armenia and underscore Biden seriousness about respect for human rights as a central principle in his foreign policy.

“Within the United States and outside the United States, the American commitment to basic human values has been questioned now for decades,” she said. “It is very important for people in the world to continue to have the hope and the faith that America’s aspirational values are still relevant, and that we can in fact do several things at once. We can in fact carry on trade and other relations with countries while also calling out the fact that a government cannot get away with murdering its own citizens.”

Haidostian doesn’t expect Biden’s recognition to impact efforts at reconciliation between Armenians and Turks, as Turkey would first need to change how it teaches the history of that time period.

“My focus has always been the fact that as faithful Christians, we have to rise from the ashes and from the graves of history,” he told CT. “Our faith is based on the resurrection of Christ, his work for us.

“Being people of this new life, however, is not a utopic unreal life. Working for justice, working for peace, has to have a base, also on this earth,” said Haidostian. “Being healed is not an emotional state. It has be based on fairness in all aspects.”

Reporting for the Associated Press by Aamer Madhani, Matthew Lee from Washington, and Zeynep Bilginsoy from Istanbul, with writer Avet Demourian in Yerevan contributing. Additional reporting for CT by Jayson Casper from Beirut.