Every week for more than 30 years, he interpreted headlines in light of prophecy.
Daniel Silliman|January 19, 2020 03:46 PM 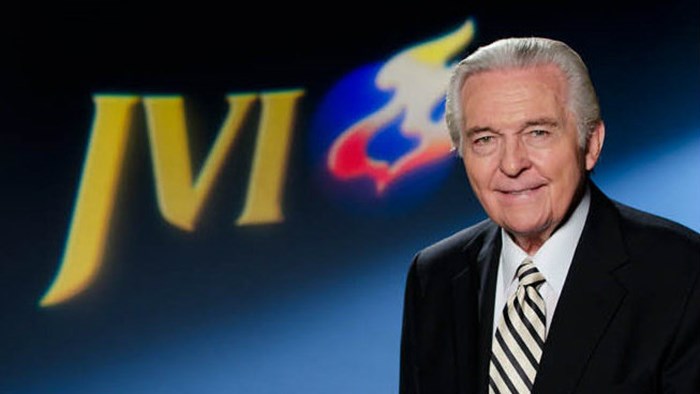 Jack Van Impe, a popular televangelist and one of the world’s most well-known end times preachers, died at the age of 88. His passing was confirmed Saturday by Jack Van Impe Ministries International.

Every week for more than 30 years, Van Impe appeared on TV as the host of his own half-hour show, Van Impe Presents, offering eschatological commentary on current events. Alongside his wife Rexella, Van Impe read the latest headlines and explained how they connected to prophecy about the Antichrist, one-world government, and the rapture of true believers that might happen at any moment.

“We only report the news from the latest papers and magazines,” Van Impe once said, “but we use the Word of God to show you that it means Christ is coming.”

Van Impe reached a global audience from his studio in the suburbs of Detroit. He had memorized tens of thousands of Bible verses, earning himself the nickname “the Walking Bible.” He would recall Scripture on his show as he explained his apocalyptic theology, before ending each episode with a call for viewers to prepare for the end by accepting Christ as their Lord and Savior.

“Few reached a larger audience than evangelist Jack Van Impe,” historian Paul Boyer wrote in his landmark study of prophecy belief in modern America. “Bible quotations studded Van Impe’s apocalyptic predictions, including not only the familiar ones from Revelation, Zechariah, and 2 Peter … but also more obscure selections from Joel, Zephaniah, Malachi, and … Ezekiel.”

Van Impe was born in Freeport, Michigan in 1931, the son of two Belgian immigrants. Jack’s father Oscar worked in a Plymouth auto factory by day and as a musician in the Detroit beerhalls by night. Oscar taught young Jack to play the accordion—sometimes, as Jack would later recall in his conversion testimony, with violent and drunken beatings.

Oscar and Marie Louise Van Impe had a conversion experience at an independent Baptist church that embraced the label fundamentalist in 1943. A week later, 12-year-old Jack walked to the front of the church to profess his own faith. The Van Impes stopped going to beerhalls and started performing gospel music in area churches. The young Van Impe soon felt a call to ministry.

He was ordained in an independent Baptist church in 1951, after graduating from Detroit Bible College, and joined Youth For Christ as a musician around the same time as the late Billy Graham. Franklin Graham tweeted his condolences, saying Van Impe’s “life demonstrated the importance of ‘laying up these words of Mine in your heart and in your soul’ (Deuteronomy. 11:18). May we all be inspired to do the same.”

Van Impe married Rexella Shelton, a musically gifted and evangelistically minded Baptist who had spent one year at Bob Jones University, in 1952. The couple set off on their own in 1970, founding Jack Van Impe Crusades Inc. They travelled the country together, performing music and preaching in 130 cities in 10 years.

From the start, Van Impe had an apocalyptic message. Popular early sermons included “The Coming War with Russia” and “Shocking Signs of the End of the Age.” Van Impe also preached about current events, warning people of the dangers of communism, homosexuality, abortion, and errant ministers. The last became a specialty. Van Impe frequently attacked other Christian ministers in his crusades—in general and by name.

“Night after night,” he later recalled, “I did my best preaching if I could be attacking individual names.”

In keeping with their fundamentalist commitments, the Van Impe Crusades initially refused to cooperate with any churches that weren’t also independent Baptist. Then Van Impe decided to exclude Baptist churches he believed had strayed from the fundamentals of the faith. Finally, he excluded fundamentalists who associated with non-fundamentalists.

The ministry expanded into radio in the late 1970s, and then television in 1980. After some backlash for criticizing other Christians on TV, though, Van Impe apologized for what he called his “super-separatist” mentality. “I could no longer be a biased, hate-filled, prejudiced man,” Van Impe told a Sunday school convention in Detroit in 1982. “I’m going to love all God’s people even if they have a different denominational tag.”

The television ministry ran into financial trouble and closed in 1984, but relaunched on Trinity Broadcasting Network (TBN) in ’88. The format of the new show was simple. Rexella Van Impe would perform a piece of music, chat with her husband, and then Jack Van Impe would bring up contemporary headlines and explain their prophetic significance. It was a formula they would repeat for the rest of their career.

By the mid-1990s, Jack Van Impe Presents aired weekly in about 25,000 cities in the US and Canada, and in more than 150 other nations around the globe. Viewers were delighted by the relevance of Van Impe’s message and his detailed application of seemingly complicated Scripture. Once, for example, he calculated how much of the earth might be destroyed by nuclear war in fulfillment of Revelation 8:7. His conclusion: exactly 18,963,194 square miles.

In the 1990s, Van Impe said he expected Christ to return between 2001 and 2012. He warned Christians to be on the lookout for the Antichrist and moves to establish a “New World Order,” or one-world government. The phrase “New World Order” was popular with far-right conspiracy theorists, including many in the militia movement. Van Impe was unfazed by the association.

“The Bible teaches that when the Antichrist comes to power, they will form a world government,” he said. “Why am I now out on a limb?”

Van Impe did balk, however, at being called a “doomsday preacher.” Christians could look forward to the rapture, he said, and Christ’s 1,000-year reign on earth before the final conflict at Armageddon. He insisted this was a message of hope.

“Rexella and I are not doomsday people,” he told the Detroit News. “We believe the greatest time is coming.”

Current events, however, looked very dark to Van Impe, and got darker in the 21st century. He increasingly worried about Islam after the terrorist attacks of 2001 and entertained numerous conspiracy theories about President Barack Obama, repeating false claims that Obama was a Muslim and part of a Muslim plot to infiltrate the US.

Van Impe’s concerns led him into conflict with TBN in 2011. He started attacking other Christian ministers for not taking a strong enough stand against Islam—and again attacking them by name. Van Impe said megachurch pastors Rick Warren and Robert Schuller, both of whom had spoken to Muslim groups, were secretly promoting a merger of Christianity and Islam, or Chrislam.

TBN refused to air the episode and Van Impe separated from the network. The Van Impes continued the show on their own, broadcasting Jack Van Impe Presents on TV and the internet. On January 10, the most recent episode available on the ministry website, Rexella Van Impe read headlines about the heightening conflict between the US and Iran.

“You know friends, there’s so much to consider out there,” she said to the camera. “And I am grateful that we have a president who says we are not going to be number two, we are going to stand up to what’s happening.”

Then she turned it over to her husband, asking him if there was going to be a war.

“The Bible says in Ezekiel 38, 39, Gog, Magog, Mesheck, Tubal, and Rosh are going to lead the battle,” Van Impe said. “Who are they? Well Gog is the leader, Mesheck and Tubal is Moscow and Tobolsk, after being interpreted. And all the Orient, Revelation says, is going with them. China, North Korea, all of them … It’s going to be the bloodiest war in the world. The blood will flow to the bridles of the horses for 200 miles.”

Van Impe died eight days after the episode aired, concluding a 68-year career in ministry. Jack Van Impe Ministries has not named the cause of death. Funeral arrangements are being made.