Middle East believers say the enemies of their enemies are not necessarily their friends.
Jayson Casper|October 24, 2019 09:48 AM 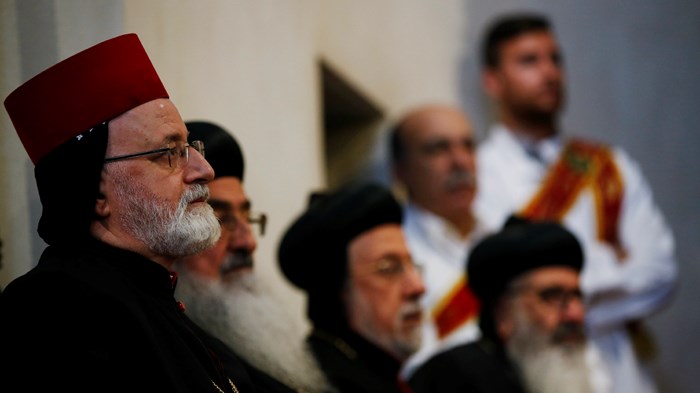 As reports circulated that Turkey had violated its five-day pause in operations against the Kurds on the Syrian border, President Recep Tayyip Erdogan’s rhetoric intensified. If Kurdish fighters did not withdraw from their positions, as agreed between Erdogan and President Donald Trump, Turkey would “crush their heads.”

The front now appears quiet as Turkey has secured its “safe zone” in cooperation with Russia.

In America, as reported in the press, Christian opinion has been almost universal in its condemnation. But the Christian landscape in the Middle East, home to the oldest and some of the most enduring persecuted traditions in the faith, offers a complex array of responses.

CT has previously covered anti-Turkish sentiment from the Syriac, Assyrian, and Protestant communities of the region.

But there is an underreported—and contested—pro-Turkey and anti-Kurdish contingent as well.

“President Trump is right on Syria!” stated Johny Messo, president of the World Council of Arameans, in a press release. “These ‘heroes’ have oppressed vulnerable Arameans, taken their innocent lives, Kurdified their lands, and still use a tiny Christian group as their mouthpiece.”

The Arameans, though an ancient expression of Christianity, represent a 20th-century revival of identity tied to the ancient biblical land of Aram. Communities exist in Syria, Turkey, and elsewhere in the region, and have been recognized by Israel.

While the West has rallied behind the democratic Syrian enclave that permits religious freedom, Messo says what it commonly called Kurdistan is actually ancient Christian territory, taken over.

When Kurdish-led Syrian Democratic Forces enter a village, they raise the flags of the Kurdistan Workers’ Party (PKK), defined as a terrorist entity by the United States. They have kidnapped Christians and seized their lands, says Messo. And by provoking Turkey, they are bringing additional suffering upon all—including local Christian communities.

“As the indigenous people of Southeast Turkey and Northeast Syria, we call upon the PKK to end its violent struggle for independence,” Messo stated, “so that Arameans, Kurds, Arabs, and Turks can work together on a mutually enriching coexistence between different ethnicities, religions, and languages.”

The Syriac Catholic archbishop of Al Hasakah-Nisibi, one of the cities where fleeing Christians have taken refuge, agrees with his anti-Kurdish stance.

“For years, I have been saying that the Kurds are trying to eliminate the Christian presence in this part of Syria,” Jacques Behnam Hindo told Aid to the Church in Need last year. His particular concern was the Kurdish effort to change the curriculum of local Christian schools—in operation since the 1930s—or to shut them down, as happened in three cities in 2018.

Syriac has traditionally been associated with language and liturgy, rather than ethnicity. Also based in Turkey and Syria, some Syriacs identify as Arameans, others as Assyrians. This latter group is strong in Iraq, with communities in Iran.

From Iraq, where the constitution grants Kurds an autonomous region in the north (bordering Syria, Turkey, and Iran), one influential voice prefers not to take sides.

“We don’t want Turks, we don’t want the PKK, and we call for international protection,” said Ashur Eskrya, president of the Assyrian Aid Society.

“The Turks will make things unstable, and Christians will flee. But the PKK will change the demography and not allow us to live with our heritage.”

Historically, Turkey has been blamed for the Armenian genocide that took place more than a century ago, and many other Christian communities have complained of its Ottoman Empire and nationalist beginnings. And back then, the Turks were allied with Kurds.

“The Kurds do have a history of genocidal acts towards Assyrians that needs to be recognized,” said Peter Burns, government relations director with In Defense of Christians. “But that does not mean we should simply side with whomever is pointing guns at Kurds in the moment, as in some cases they align with Christian interests against common enemies.”

The Assyrians are a “passionate” sect within regional Christianity, Burns wrote in an analysis for Providence, a Christian foreign policy journal. They trace their ancestry to the biblical Assyrian Empire, and their faith to the preaching of Thomas and Thaddeus, Jesus’ disciples.

But other Christian subgroups—such as Chaldeans and Syriacs—chafe at Assyrian insistence on a Christian homeland, preferring not to get caught up in Assyrian nationalist political ambitions. And according to Burns, Aramean is a controversial term created in modern times to encompass the broader Christian community in the region. Most Christian sects do not embrace it as their ethnic identity.

In the fight against ISIS, some Christian militias have aligned with the Kurds, such as the Nineveh Plains Guards. But one in particular, the Babylon Brigades, has preferred Iran.

Crossing into Anatolia—the biblical Asia Minor—other ancient Christian confessions have come out in favor of the Turkish incursion. While citizens of Turkey, many Christians there identify with their historic ethnic and church affiliations.

“We pray that Operation Peace Spring, which aims to end terrorism and ensure the security of the borders, will continue in accordance with its purpose, and establish peace and security as soon as possible,” Sahak Masalyan, head of the Armenian Patriarchate of Turkey, told the state-run Anadolu Agency. “Unfortunately, it’s not possible to establish peace with a peaceful path every time.”

Along with the Armenians are foundations representing the Syriac and Assyrian churches in Turkey, which released an almost identical statement.

“We support Operation Peace Spring launched by our country, and the security of the people living in Syria,” it stated. “Our soldiers are fighting at the expense of their lives, and we hope they will return to their country unharmed.”

Mustafa Akyol, senior fellow on Islam and modernity at the Cato Institute, shares many Western concerns about the Turkish incursion. He thought the Turks would not target Christians, though he expressed doubt about Turkey’s aligned Islamist militias.

But the PKK is Turkey’s biggest terrorist problem, he said, and the Kurdish militias on the Syrian border are clearly linked.

Within this cauldron, he had clear advice for regional Christians.

“Stay as apolitical as possible,” Akyol, author of The Islamic Jesus, told CT. “Otherwise, they will easily fall victim to the wrath of the various groups fighting each other, often without any clear ‘good side.’”

This includes the Turkish state, said Pinar Tremblay, visiting scholar of political science at California State Polytechnic University–Pomona. She told CT the pronouncements of support, while not inauthentic, were unlikely fully free.

“I do not think any religious figure is independent in Turkey—and that includes Muslim scholars as well,” she said.

“The state flexes its muscles over their statements routinely, and anyone who doesn’t support the operation could face legal and social consequences.”

The Associated Press reported 500 people were investigated and 121 detained for social media posts critical of the operation, according to Turkey’s Interior Ministry. Reuters reported 24 people were arrested.

And in the Kurdish-majority southeast of Turkey, five mayors were jailed and two others were detained, accused of links with the PKK.

But whereas the Syrian Observatory recorded that 224 SDF forces, 183 Turkish-backed rebels, and 72 civilians were killed in fighting so far, Tremblay believes it was the Christian deaths that worried the government.

“Ankara was particularly concerned that news of Christian casualties would anger the White House,” said the Al-Monitor columnist, to which she attributed the statements. “Turkey desperately needed to boost its image.”

But that does not mean the sentiments were untrue. CT spoke with three Turkish Christian leaders, each of whom requested anonymity.

“Turkey has the right to protect its own borders,” said the first.

“We are praying for the protection of our soldiers, and I am outraged at Trump’s letter,” said the second, referring to the American president’s personal missive warning Erdogan “don’t be a fool.”

The third put it plainly: “The prisons of Turkey are filled with authors and reporters who have written down their opinions freely. If my answers are revealed to be my own opinions, my imprisonment without trial or inquiry will be a certain future.”

The Committee to Protect Journalists states Turkey is the world’s worst jailer, with 68 reporters imprisoned.

One source said the real reason behind the Syria incursion is Erdogan’s recent electoral setbacks and the declining economy. Another said that “killing Kurds” helps Erdogan’s nationalist agenda. And the other called it an “invasion” that will result in suffering for many innocent lives.

All three said they were against the war.

“Turkish Christians know very well that war is a bad thing and that it does not serve God,” said one. “For this reason, they take every opportunity to say that they are praying for the war and the bloodshed to stop.”

“Most Turkish Christians around me are against this war,” said another. “We are praying for peace and for this war to end.”

The other said there was a lot of confusion in the churches, as Christians feel like they are walking on eggshells.

“There are so many things we know very little about, and there are big games being played,” the source said. “This is how evil is operating.”

One leader in Turkey worried that peaceful protest would not be possible, and all Christians can do is pray.

In this regard, Masalyan’s official statement on behalf of the Armenian church may be most poignant.

“We are also praying for Syrians, who were tortured, oppressed, and forced to leave their country because of terror, for them to live in peace and look forward to a brighter future without losing faith in justice, peace, and good days,” he stated. “May the Lord inspire our leaders and commanders with the spirit of wisdom, compassion, and common sense.”