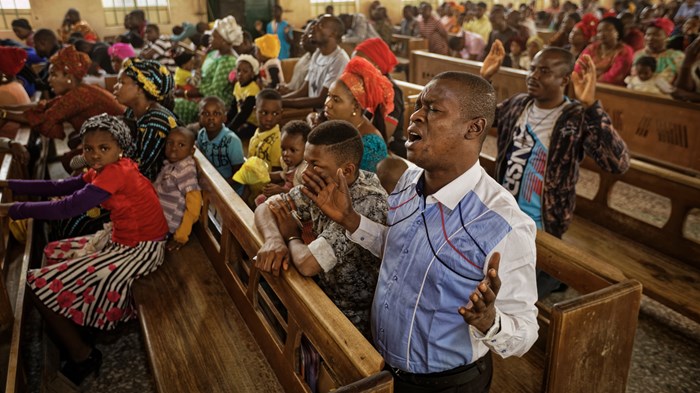 Image: Ben Curtis / Associated Press
Terrorist attacks have long beleaguered Christians in northern Nigeria, including this Catholic church in Kano (photographed in 2019) back in 2014.

In another filmed massacre, 11 Nigerian Christians were executed by the Islamic State West African Province (ISWAP) over the Christmas holiday.

Wearing the orange jumpsuits made familiar by similar executions of Egyptian and Ethiopian Christians in Libya, the first Nigerian victim was shot in the head by the black-clad terrorists who then slit the throats of the remaining ten. It is understood to be the largest group killed by ISWAP, a Boko Haram splinter group, so far.

“This message is to the Christians in the world,” stated the 56-second propaganda video, released December 26, in both Arabic and Hausa, according to The New York Times.

“Those who you see in front of us are Christians, and we will shed their blood as revenge for the two dignified sheikhs.”

The reference is to Abu Bakr al-Baghdadi, the former ISIS caliph killed by US troops in an October raid in Syria, and Abu al-Hassan al-Muhajir, his purported successor, who was killed the next day.

The video offered no information about the victims, other than that they were recently seized in Nigeria’s northwest Borno state. But an earlier video was released by ISWAP in which captured aid workers appealed to Nigerian President Muhammadu Buhari, as well as to the Christian Association of Nigeria (CAN).

Four aid workers were killed by ISWAP earlier this month. Dozens of others are believed to still be in captivity, including Leah Sharibu, a teenage girl kidnapped almost two years ago whose perseverance under pressure has inspired Nigerian Christians.

The International Crisis Group estimates the jihadist group consists of between 3,500 and 5,000 fighters.

“These agents of darkness are enemies of our common humanity, and they don’t spare any victim, whether they are Muslims or Christians,” stated Buhari, according to al-Jazeera.

Nigeria’s population of 200 million is evenly divided between Muslims and Christians.

Muslim victims have been many, agreed CAN in an earlier statement. But it stated the widespread killing in Nigeria’s north has predominately targeted Christians, who make up 95 percent of those currently detained by jihadists.

“The government has been paying lip service towards securing their freedom,” stated CAN, mentioning in particular the case of Sharibu.

“We are appalled by the vicious ISIS-West Africa attack targeting Christians in Nigeria,” tweeted Tibor Nagy, the US State Department’s top Africa policy official. “Nigeria’s history of peaceful coexistence between Christians and Muslims and constitutional protections for freedom of religion will not be defeated.”

Johnnie Moore, a commissioner with the US Commission on International Religious Freedom (USCIRF), highlighted an opposite feature.

“The ongoing execution of Christians by terrorists in Nigeria (a country where more Christians have been killed for their faith than any) is a shame to the entire world,” he tweeted. “No one, whatever faith, should fear for their lives. Nigeria must do more [to] stop this.”

Prior to the attack, the two federal entities had actually agreed on Nigeria for the first time. Following USCIRF recommendations since 2009, on December 18 the State Department included Nigeria on its Special Watch List for governments that have engaged in or tolerated severe violations of religious freedom.

Boko Haram, the Nigerian terrorist group, has been listed as an “Entity of Particular Concern” since 2017.

Moore’s tweet referenced 2015 data from the Global Terrorism Index stating that Boko Haram’s 6,664 killings that year had exceeded those of ISIS by a few hundred victims.

And over the last 10 years, United Nations data cited by AsiaNews recorded 36,000 victims of Islamic terrorism across West Africa, with 2 million displaced individuals.

ISWAP broke away from Boko Haram in 2016, in part over offense at its brutal methods.

But USCIRF’s report noted religious freedom violations were “trending negatively” even so.

Open Doors, which ranks Nigeria No. 12 on it World Watch List (WWL) of the 50 countries where it’s hardest to be a Christian, provided sobering statistics.

Its 2019 report tallied 3,731 Nigerian Christians killed because of their faith, almost double the 2,000 deaths the year before—and comprising 9 in 10 of all the WWL’s reported martyrdoms worldwide.

Open Doors also cited 569 attacks on Nigerian churches and 29,444 attacks on homes and shops, compared to 22 and 5,120 the year before, respectively.

“Nigeria is the most dangerous place in the world to be a Christian,” stated Emmanuel Ogebe, an international human rights lawyer, according to Premium Times. “It is high time this is recognized.”

Both USCIRF and Open Doors attributed much of the violence to Muslim herders raiding “Middle Belt” Christian farming areas. US Representative Chris Smith, a Republican from New Jersey, called on Buhari to stop the “deteriorating” situation, and for the State Department to monitor further the Miyetti Allah group responsible.

But the Nigerian government called the State Department listing “false,” and blamed political opponents for misrepresenting the situation.

“The religious tag given to the clashes has no basis in fact,” it stated, according to Premium Times.

“But it is very convenient for those who will very easily give the dog a bad name, just to hang it.”

Buhari’s administration said it was making progress in curbing the environmental and socio-economic herder-farmer clashes, and had “largely defeated” the Boko Haram insurgency.

Its statement, released prior to the most recent killings, did not mention ISWAP.

The Christian Association of Nigeria disagreed with the Nigerian government’s position, and commended the US State Department for “standing with the oppressed and the truth.”

CAN stated that Buhari’s administration “turned a deaf ear” to its many suggestions for addressing issues of religious intolerance. And remarks by the Muslim chief justice to promote elements of sharia law in the national constitution were a “slap in the face.” Twelve Muslim-majority northern states have already included sharia in their regional legal code.

The association also criticized Buhari for creating an imbalance in the religious composition of the security council, through recent appointments. “The bitter truth,” CAN stated, “is that Christians are yet to be given any sense of belonging since this government came on board.”

CT went to Nigeria in 2018 to report a cover story on the double persecution of Africa’s largest church. CT also previously reported how the Bible Society of Egypt turned ISIS’s Libya propaganda video into its most successful Bible outreach ever.