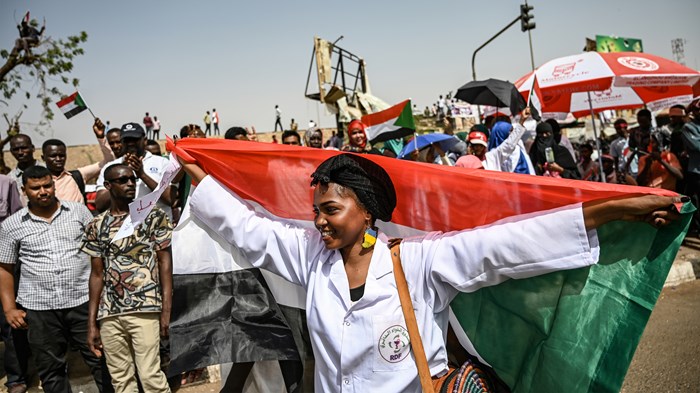 One of the early iconic martyrs of Sudan’s recent protests was inspired by Christian oppression.

Shot dead by police while aiding protestors against the regime of 30-year dictator Omar al-Bashir, Babiker Salama—a 27-year-old doctor from an exclusive Khartoum suburb—was motivated in part by what he witnessed in the mountain region populated by one of Sudan’s few Christian communities.

“We were not like the people in need,” his sister toldThe New York Times in January. “We had nothing to do with politics.”

Salama was sent by the military for a three-month stay. After performing emergency C-sections by the light of his cell phone, he volunteered to stay three months longer until a replacement could come.

The same military has now replaced Bashir, whose crimes include indiscriminate bombing in the Nuba Mountains.

And among the thousands who protested outside military headquarters demanding his overthrow were Sudanese Christians, from the mountainous community.

Open Doors ranks Sudan No. 6 on its list of nations where it is hardest to be a Christian, and in the top 10 since 2015.

“It has a human and emotional impact and it draws a patriotic image Sudanese people long missed,” political analyst Faisal Salih toldTheGuardian.

“Most importantly it shows a transformation in the position of the Coptics … who avoided getting involved in politics, except for a few of them.”

The Sudanese Copts set up shelters for Muslim prayer, recalling images of cooperation from the 2011 Arab Spring in Egypt.

It is difficult from media analysis to judge whether or not Sudanese Christians—4.6 percent of the population, according to the World Christian Database (Sudan's government puts them at less than 3 percent)—welcomed the revolution or feared it.

Early reporting in Cairo focused on ecumenical euphoria, and in Sudan when Christians are mentioned it is in anecdotal reports of hymn singing welcomed within Muslim masses.

But the spirit of Tahrir Square eventually gave way to tension as Islamist politicians ascended to power in Egypt. It reversed back when the military deposed Muslim Brotherhood-affiliated President Mohamed Morsi. Widespread protests against his rule united Muslims and Christians again, but with thousands of Brotherhood sympathizers—some violent—jailed or in self-imposed exile.

Yet Sudan’s revolution began by driving out an Islamist. (Following the cessation of South Sudan in July 2011, Bashir implemented Shari‘ah law throughout his remaining territory, and pushed South Sudanese Christians in the north to leave.)

Early signs are promising. On April 10, one day before Bashir’s arrest, the Sudanese Professionals Association (SPA) leading protests put out a call for Christian participation, acknowledging “you have suffered sectarian and psychological restrictions for years … [which have left you] without the right to worship freely.”

Shortly thereafter the SPA declared “Christ is the heart of the revolution,” and cited “blessed are the peacemakers.”

Leaders from the Evangelical Presbyterian, Baptist, and Church of Christ denominations in Sudan appeared at a sit-in at military headquarters, offering hymns sung by both Christians and Muslims.

“This is a time to move away from the trenches of religious and ethnic discrimination and head towards an inclusive and unifying Sudanese national identity for all of us,” said Rafaat Masaad, head of the Evangelical Synods in Sudan.

“We must make a covenant that we will not withdraw or accept anything less than a new Sudan ruled by humanity and citizenship.”

Sudan, however, is not the only version of Arab Spring, Part Two. The military in Algeria removed their aged president on April 2 following widespread protests that began in February. The wheel-chair bound 82-year-old President Abdelaziz Bouteflika was attempting to secure his fifth term in office.

Unlike Bashir, Bouteflika was a beloved figure. A popular politician in his youth, he fell out of favor but returned in 1999 to put an end to the decade-long civil war that began when the military nixed an Islamist election victory that eventually killed up to 200,000 people.

A secularist of sorts, Bouteflika was an autocrat who allowed limited Islamist space of action. An Algerian Muslim Brotherhood figure was among the tentative opposition candidates against Bouteflika’s fifth-term ambitions. But al-Qaeda called from the outside for protests to impose an Islamic state, declaring Bouteflika was a friend of Christians and Jews.

The World Christian Database counts Christians as only 0.3 percent of the population, while Open Doors ranks Algeria No. 22 in its watch list, though one year earlier it ranked No. 42.

The Algerian Protestant Church, consisting mainly of former Muslims, and known by its French acronym EPA, was registered officially in 2011. But in practice it faces many restrictions, with houses of worship liable to be shut down.

“Since the beginning of the year, all the churches have begun to pray and fast for the elections,” said an unidentified Algerian Open Doors source, knowing the results are “unpredictable” but aiming for better legal standing.

“We hope that the Lord intervenes in our country.”

But on March 22, with the protests fully engaged, the EPA put out an official statement.

“We Algerian Christians, as equal Algerian citizens, fully share the aspirations and the legitimate demands of the Algerian people in their peaceful fight for a modern and democratic Republic,” it declared, “where the fundamental rights of the citizen will be respected and protected, no matter what their political and religious convictions may be.”

Will they receive their wish? Will Sudan?

One hint lies in the makeup of the military. Bashir was deposed by Awad ibn Auf, like his predecessor wanted by the International Criminal Court for repression in Darfur. Ibn Auf and deputy head of the transitional military council Kamal al-Mahi were identified by Reuters as having close ties to Islamists.

But one day later ibn Auf resigned, and al-Mahi was relieved of his position. New head Abdel Fattah al-Burhan Abdelrahman is described as a career soldier with no particular political leanings.

Hints can be difficult to judge and may be subject to the leanings of analysts. But in Algeria, it lies confusedly in the makeup of demonstrators. Voice of Americasaid Islamists were “participating heavily” in protests. The Atlantic Council said protestors “kept them at a distance.”

Equally hard to judge is the best way forward for these nations, to avoid the errors of Arab Spring, Part One.

An op-ed in The Washington Postsuggests “a liberal Arab future might well depend on bridging the gap between Islamists and secular democrats.”

The Atlanticurges “an unaffiliated, nonideological body [for] mobilizing masses of people,” who should be “wary of promises from the army.”

Al-Jazeerarecommends the “need to get the military on their side and on their terms … until a new transparent system of accountability is in place.”

The Arab Baptist Theological Seminary in Lebanon wrote of media manipulations, and how “ruling powers” filter the news. Believers must therefore “dig deeply, [for] it is our responsibility as the body of Christ to seek justice for the oppressed and make Christ known.”

Open Doors was a bit more suspect, but perhaps realistic.

“Bashir was no doubt a dictator likely guilty of terrible crimes,” stated OD’s Christopher Summers. “[But] there is no assurance that his replacement will be any better.”