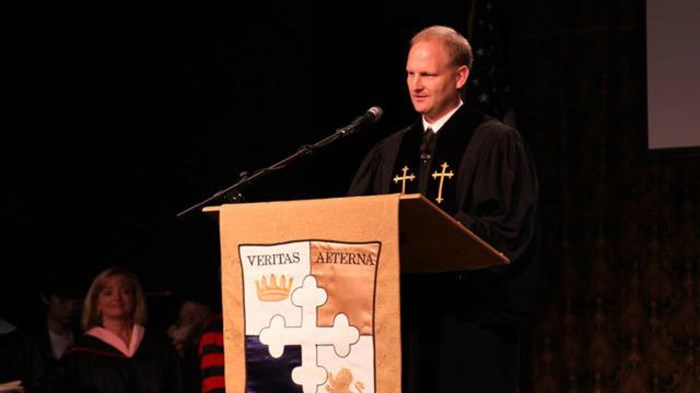 The brother of singer-songwriter Twila Paris was indicted this month by an Arkansas grand jury for bribery.

Court documents allege that Oren Paris III traded money to state lawmakers in exchange for grants to Ecclesia College, where he is president.

Paris has said he is innocent, and his school’s board is sticking by him.

“While the allegations made against Oren are to be taken seriously, we are confident once all the facts and the truth are made known, all will come to understand as we on the Board of Governance believe, that Oren has acted at all times with absolutely integrity and always in the best interests of Ecclesia College,” stated the school’s board of governance.

“I am so blessed to have Oren as my brother and so grateful for his faithful service in God’s Kingdom,” she wrote on Facebook. “Those who know him well know that he is a man of deep integrity with a long established record of exemplary character. It is very clear that his highest aim is always to please God.

“My family and I are humbled and strengthened by the many people of good will who are believing the best and standing with us in prayer during this season we could never have imagined.”

The story is a tangled one, and it starts with the school. Sitting on 250 acres in Springdale, Ecclesia offers 17 degrees to about 283 students. It’s a “work college,” which means students do jobs on campus in exchange for lower tuition.

Twila’s parents and grandparents established the small Christian liberal arts college in 1975, along with Twila, her three younger siblings, and their grandparents. In the beginning, it hosted training schools for YWAM (Youth With a Mission), which was founded by Twila’s uncle Loren Cunningham.

In 1996, the campus transitioned into a Bible college, accredited by the Association for Biblical Higher Education. In 2005, it received accreditation as a liberal arts school. The college is part of the Ecclesia Network, which also includes Strategic Missions, Ecclesia Relief and Development, Bibles For the Nations, Ecclesia Children’s Ministries, Happy Few Unlimited, and Twila Paris Productions.

Twila’s father led the institution until her brother, Oren Paris III, took over as president in 1997. Twila’s sister Angie Snyder is the director of communications; brother-in-law Mike Novak is the financial development director and runs IT. Her mother Inez Paris is the chancellor and sits on the eight-person board of governance; so does Twila’s husband Jack Wright and Oren Paris III himself.

In all, seven family members draw salaries from the school, Snyder told CT. The indictment charges Paris with receiving more than $300,000 in compensation over four years; in all, his family recieved more than $1 million.

Aggregating those salary figures over a four-year period—$300,000 in Dr. Paris’ case—make a salary that is modest by comparison to other college presidents seem illegal or untoward. Additionally, Dr. Paris’ salary is authorized by the Ecclesia Board of Governors.

Likewise, to bundle the salaries of six other family members employed in various functions by the College and to multiply those figures by a factor of four seems to support the government’s case, when in reality each family member averages less than $30,000 per year. For no other reason than to imply criminal activity does the government include those facts in its presentation to the grand jury. There is no suggestion in the indictment that the money to pay those salaries came from funds the government alleges was unfairly or illegally gotten.

“Indictments reflect only what information is presented to the grand jury by the prosecution side, and is never favorable to a target of the investigation,” Snyder told CT. “However, because an indictment has been issued, it does not seem prudent for those of us who know the whole story to discuss details of the case until the appropriate time and place, and we have been counseled not to do so.

“One can only imagine the frustration in knowing the falsity of charges made against you or a person you know well, yet having to stand silent against the press release published by the prosecution.”

The board is made up mostly of uncompensated pastors, she said. “So the obvious question is, ‘Why would a group of seasoned ministers who have nothing personal to gain stand unanimously with Dr. Paris unless they have very good reason to believe fully in his innocence?’”

Four of the eight board members are pastors or former pastors. But the board also include Joseph Wood, the deputy secretary of state who recently ran as the GOP candidate for Washington County judge, and won. That was a last-minute decision; the Republicans backed him after state representative Micah Neal dropped out in order to spend more time with his restaurant business and family, the Arkansas Times reported.

But Neal also has an upcoming guilty plea on charges of directing $600,000 in state funds to two nonprofits in exchange for $38,000 in kickbacks. (Even the way he exited the county judge race—by claiming an address change—seemed shady to local Democrats.)

One of those nonprofits was Ecclesia. The college received almost $700,000 from January 2013 to October 2015 for “property acquisition,” “student residence space,” or “land acquisition.”

Neal wasn’t the only one directing money to the state’s only “work school.” In Arkansas, when the state has extra money at the end of a fiscal year, it’s placed in a General Improvement Fund (GIF). Those funds are then divvied up among lawmakers, who can recommend the funds be given to nonprofit or government entities.

Arkansas Online laid out the scope:

Neal’s plea agreement says he requested a $50,000 grant be given to a private college in Springdale and an unnamed senator would request $150,000 for the school. The only grant Neal directed for $50,000 to a private college was for Ecclesia, according to records from the Northwest Arkansas Economic Development District, which administers the fund. His grant was awarded Dec. 18, 2014, a day after [state senator Jon] Woods directed a $150,000 grant to Ecclesia, according to the records.

Nine Northwest Arkansas legislators requested $592,500 for the school. Woods directed the most at more than $350,000.

Another $100,000 from the fund to Ecclesia came through the West Central Arkansas Planning and Development District in Hot Springs. The only documents from legislators provided by that district in support of the grants came from Woods.

The financial flow stopped in October 2015 when a grand jury subpoena arrived at the Northwest Arkansas Economic Development District. They stopped cutting checks to the college.

But not before Ecclesia used it to purchase 50 acres (on top of the 200 it already owned) at “well over the market value,” Arkansas Online reported. And even though the school referenced the need to “provide critically needed space for incoming resident students beginning fall of 2013,” no buildings or renovations have been done on the land, the Northwest Arkansas Democrat Gazettereported.

But Snyder said that “the monies requested (properly—there is documentation for everything) were indeed spent on land that already had existing housing, in which students have indeed lived.”

On March 1, the grand jury filed a 43-page indictment against Paris, Woods, and go-between Randell Shelton, charging each with “knowingly and willfully” devising a scheme to defraud the citizens of Arkansas.

“The purposes of the scheme included … for Paris to enrich himself, his family, and Entity A [Ecclesia], by paying bribes to Woods and Neal, through Shelton, in exchange for the use of their authority as legislators to obtain and direct GIF monies to Entity A.”

Inside Higher Edexplained how the alleged scheme worked:

The same September day, Ecclesia College cut a check for $50,000 to a consulting firm that had been established the day before by Randell G. Shelton Jr., a friend of both Paris and Woods. Shelton took the check and used it as an initial deposit to open a bank account for the consulting business. Then four days later, on Oct. 1, Shelton transferred $40,000 from the newly opened bank account to a personal account owned by the state senator, Woods.

Also on Oct. 1, Woods withdrew $33,000 from his personal account to buy a cashier’s check. The only funds in the account at the time had come from the consulting firm’s account, which was only filled with money from Ecclesia College.

Shelton issued a check to himself on the same day from the consulting firm’s account for $1,035.62, writing that it was a reimbursement for gas expenses. Two days later, Ecclesia College’s Board of Governance approved a $25,000 bonus payment to its president, Paris. The board approved the bonus on the same day the college deposited the state General Improvement Fund money into its own account.

Over two years, Paris paid Shelton’s consulting firm $267,500 without telling his board of governance, the indictment said. Shelton is the firm’s incorporator and only member.

Paris also hired an administrative assistant—who was a friend of Woods’—for a salary of $43,000 and a signing bonus of $7,000.

None of Ecclesia’s financial records are public. Since the school operates as part of Ecclesia Inc, which is a church, it’s not required to file public 990 tax forms with the IRS.

In January, after Neal’s confession, Oren Paris III took to Facebook to publicly “assure you that neither I nor anyone associated with Ecclesia College has ever participated or engaged in any activity to provide money to Mr. Neal or any other legislator in exchange for the receipt of those funds.”

“I can unequivocally state that neither I nor Ecclesia College have been party to illegal activity. We have never been a party to any agreements to funnel money to any state legislator,” he wrote. “At the end of the day, I am secure in the knowledge that there has been no wrongdoing either on my part or the school’s part, and any rumors, innuendo, or any future news reports that say otherwise are simply untruthful.”

The day after the charges were filed, Ecclesia’s board of governance said it would stand by Paris. The school is not named in the indictment.

“We are at peace in the knowledge that Oren is a godly leader, a loving husband and father, a vigilant shepherd, and a faithful servant. It is in this confidence that we as a board remain loyal and steadfast with our brother in Christ,” the board stated. “We are in unanimous agreement that Dr. Paris should continue in his mission as president of Ecclesia College through these challenging times.”

Paris’ mother and brother-in-law joined in signing the letter.

“The enemy’s attacks on those who stand uncompromisingly for biblical truth can come in many forms—and increasingly, in this particular form,” said Snyder to CT. “We are so gratified by all the spiritually discerning brothers and sisters who have been able to ‘read between the lines’ and have expressed their continued strong belief in [Oren] Paris and Ecclesia College.”

“The Ecclesia team is made up of persons with the highest integrity, commitment and moral values,” board of regents member Steven Henderson commented on Facebook.

“Naturally, my support for you remains absolute in these unfortunate occurrences that have made the headlines and caused doubt on the integrity and mission of Ecclesia College,” another board of regents member, H. D. McCarty, wrote to Paris. “Be assured, my brother, of my continued absolute confidence for you and my prayers for you as we move through this crisis to greater things that are ahead of us.”

“Praying for my friend Oren Paris at @EcclesiaCollege, which is going through a trial! But we know God will triumph!” Metaxas tweeted yesterday.

He also commented on Ecclesia’s Facebook page: “Praying for Oren Paris and the Ecclesia Family. They are some of the most honorable people I know, so expecting great things in the end!”