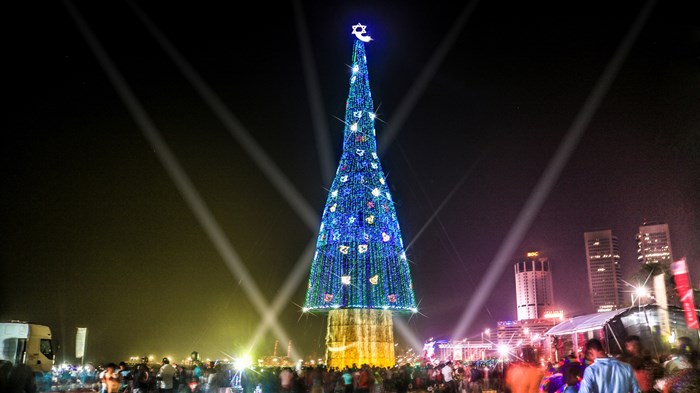 The South Asian island nation of Sri Lanka earned its place in the Guinness Book of World Records last year with the world’s tallest artificial Christmas tree, reaching a height of 72.1 meters, or about 237 feet.

Located at Galle Face Green, a park in the capital city of Columbo, the artificial tree was erected as a steel and wire frame, draped with plastic netting, and decorated with 6 million LED bulbs; more than a million red, green, gold, and silver pine cones; and a star top spanning 6 meters (20 feet).

Though government official Mahinda Nanayakkara is a Buddhist—like more than 70 percent of the population in Sri Lanka—he was the one to present the idea of the tree to Ranatunga almost four years before it became a reality in 2016.

Hundreds of workers volunteered to assemble the giant tree—an effort to promote religious harmony, peace, and unity in a country long divided on religious and ethnic lines.

But one year after the news of the tallest artificial Christmas tree made it around the world, religious harmony on the island has not improved. According to the National Christian Evangelical Alliance of Sri Lanka (NCEASL), religious freedom violations have grown.

“After the new government came in 2015, we thought incidents will decrease. But to our surprise, they increased,” Godfrey Yogarajah, NCEASL general secretary and World Evangelical Alliance associate general secretary, told CT.

Christians make up about 8 percent of Sri Lanka’s population. The minority Muslim community—comprising about 10 percent—is also feeling the pressure.

The Secretariat for Muslims (SFM), a civil society organization that has been documenting incidents against the Muslim community since 2013, reported at least 20 attacks against Muslims in the month of May alone—including attacks on mosques and Muslim-owned businesses.

The chairperson of the Human Rights Commission of Sri Lanka wrote to President Maithripala Sirisena in the spring, asking him to intervene against attacks on Christian and Muslim communities. Other areas of society also felt the impact, with human rights defenders and NGOs similarly reporting a spike in attacks.

Dias briefly fled the country, only to face a seven-hour interrogation by the newly formed Organized Crimes Prevention Division upon his return. Because he cited a NCEASL report, three evangelical officials also faced questioning. They spent an entire day at a branch of the division without food or water.

“If we speak out, we are being intimidated, while the extremists continue to function with impunity,” said Yogarajah. “Very rarely any action is taken against them.”

Christian leaders also report that police and divisional secretaries try to close churches by accusing them of not being registered with the Ministry of Religious Affairs. Even churches that have been incorporated by the parliament have been deemed illegal by certain officials.

While the Theravada Buddhist Sinhalese are a majority in most parts of the country, Tamils—who are mostly Hindus (15% of the island’s population) and Christians as well—constitute the majority in the northern province of Sri Lanka.

Although Sri Lanka is a secular state and its constitution guarantees religious freedom for all, the document also accords the “foremost place” to Buddhism and states, “it shall be the duty of the State to protect and foster the Buddha Sasana [teachings of the Buddha].”

A Supreme Court ruling in 2003 determined Sri Lanka’s constitutional obligation was to protect only Buddhism, while other religions were not given the same rights of state-provided protection.

In recent years, Buddhist nationalism has emerged as a powerful force, and is largely responsible for the violence unleashed against minorities in Sri Lanka. The Bodu Bala Sena (BBS), a right-wing Buddhist organization, was established in 2012 with a clear stance against minority groups. The Siva Senai, a right-wing Hindu group (similar to the Shiv Sena in India) was established in October 2016.

Both groups call for a ban on “forcible conversions,” alleging that Buddhists and Hindus are being converted to Christianity by force. They have been targeting the Muslim community as well.

Christianity came to Sri Lanka in 1505 with the Portuguese, who introduced Roman Catholicism. The Dutch brought the Dutch Reformed Church in the mid-1600s. Since the 1800s, Anglican, Methodist, Baptist, and Salvation Army churches have also found a foothold in the country.

When the new government came to power in January 2015 under the leadership of Sirisena, many Sri Lankans hoped the treatment of minority faiths would improve. Though the president was known to be more open and tolerant of minorities than his predecessor, attacks on minorities have continued unabated.

At the inauguration of the Christmas tree, Ranatunga (then the minister for ports and shipping) said that while Sri Lanka was still grappling with issues regarding religion, caste, and race, the tree “is just to show the world that we can live as one country, one nation.”

But it will take much more than a record-breaking Christmas tree to achieve religious harmony and peace in a nation where longstanding wounds have yet to heal, the state fails to protect minority faiths against discrimination, and social movements continue to drift toward jingoistic nationalism.