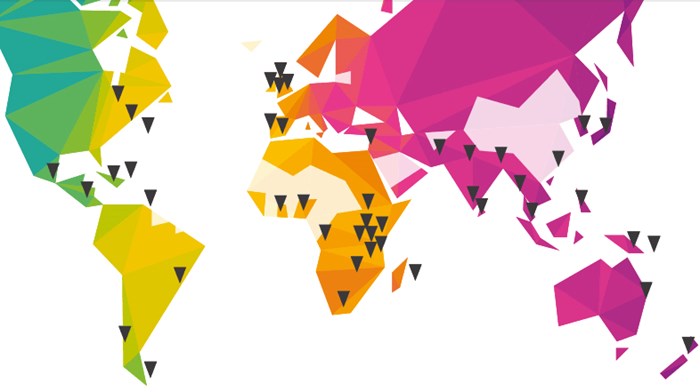 Update (Jan. 15): The senior bishops of the Anglican Communion released a final statement today, noting their "unanimous decision ... to walk together, however painful this is, and despite our differences, as a deep expression of our unity in the body of Christ." 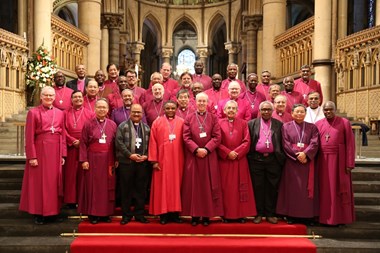 The primates said their action against The Episcopal Church (see below) would also be applied to other provinces "when any unilateral decisions on matters of doctrine and polity are taken that threaten our unity." Archbishop of Canterbury Justin Welby emphasized at a press conference that the action "is not a sanction. It's a consequence."

The primates also condemned "homophobic prejudice and violence" as well as "criminal sanctions against same-sex attracted people." They agreed to meet again in 2020.

Noteworthy to conservatives, beyond the action taken against the US province, was the full participation of the leader of the Anglican Church in North America (ACNA), a new conservative body, among the leaders of the communion's 38 provinces. However, the primates noted that ACNA "would raise significant questions of polity and jurisdiction" if it were to apply for full membership as an Anglican province.

"The sanctions are strong, but they are not strong enough, and to my deep disappointment, they didn’t include the Anglican Church of Canada as they should," wrote ACNA's Foley Beach. "With that said, it took many steps for the Anglican Communion to come to this current crisis. This is a good step back in the right direction, but it will take many more if the Communion is to be restored."

The Church Times reports on the resulting "sadness" and "doubts" among Americans and conservatives, respectively. Religion News Service also offers a thorough report, while Anglican Mainstream offers a roundup of news coverage and reactions.

This week's special summit of the global leaders of the Anglican Communion was widely expected to result in a schism, or at least a walkout by conservatives.

Instead, it was one of the worldwide denomination's liberal provinces—The Episcopal Church (TEC) in the United States—which received censure: suspension from Anglican committees and decision-making for three years.

Now the debate is over how significant the "partial victory" for conservatives is, with some wanting more.

Meeting in the crypt of Canterbury Cathedral in England, the majority of the communion's 38 primates voted today to suspend TEC for voting last summer to allow its clergy to perform same-sex marriages.

“The traditional doctrine of the church in view of the teaching of Scripture, upholds marriage as between a man and a woman in faithful, lifelong union. The majority of those gathered reaffirm this teaching,” read the primates' statement, which was released early after it was leaked to the media today [full text below].

“Such actions further impair our communion and create a deeper mistrust between us,” the statement read. “This results in significant distance between us and places huge strains on the functioning of the Instruments of Communion and the ways in which we express our historic and ongoing relationships.”

TEC will no longer be able to represent the Anglican Communion at ecumenical or interfaith gatherings, be appointed or elected to internal standing committees, or take part in decisions relating to doctrine or polity.

“Unlike the recommendations of the Windsor Report, which called for the ‘voluntary withdrawal’ of the Episcopal Church from the life of the Communion, today’s vote directs the archbishop to discipline the American church,” wrote George Conger, who broke the story at Anglican Ink.

The vote passed by a two-thirds margin, Conger wrote.

Church of England spokesperson Arun Arora tweeted at Conger, “Acting within the love&grace of Jesus Not about sanctions but consequences in context of unanimous commitment to walk together.”

The primary group of Anglican conservatives, GAFCON, praised the decision but said sanctions should have gone further [full text below].

"However, this action must not be seen as an end, but as a beginning," wrote GAFCON leaders Eliud Wabukala and Peter Jensen. They are concerned that the Anglican Church of Canada (ACoC) was not censured along with TEC, and wrote, "Since the beginning of the crisis in the Communion brought about by the actions of both TEC and the ACoC, the Anglican instruments of unity have been unable to guard biblical truth and restore godly order. There must therefore be doubt about the effectiveness of the sanctions that have been agreed."

The three-year suspension is meant to “respect the polity of [TEC]” and to give them time to repent and realign themselves with the 85-million-member Anglican Communion, Conger wrote. TEC has about 1.8 million members.

The decision came one day after the Ugandan archbishop, Stanley Ntgali, walked out of the meetings after his proposal to ask the US and Canadian provinces to voluntarily withdraw “until they repented of their decisions that have torn the fabric of the Anglican Communion at its deepest level” was disregarded.

“They would not agree to this request nor did it appear that the Archbishop of Canterbury and his facilitators would ensure that this matter be substantively addressed in a timely manner,” he wrote. “It seemed that I was being manipulated into participating in a long meeting with [TEC] and [ACoC] without the necessary discipline being upheld.”

Other church leaders from Africa, Asia, and South America also threatened yesterday to leave the meetings if Canadian and American provinces weren’t disciplined for their acceptance of same-sex marriage, Anglican Ink reported. But Canadian archbishop Fred Hiltz said his province had not officially accepted same-sex marriage, and that the issue would come up at the next General Synod.

"This agreement acknowledges the significant distance that remains but confirms [our] unanimous commitment to walk together," stated the primates, noting it also "demonstrates the commitment of all the Primates to continue the life of the Communion with neither victor nor vanquished."

CT has regularly reported on Anglican division, including TEC’s approval of church-wide blessings of same-sex unions in 2012, how congregations breaking away are winning court battles to keep their land and buildings, and how the Archbishop of Canterbury has approached the tension between TEC and African conservatives. CT also noted why Elisabeth Elliot remained an Episcopalian although she “deplored and abhorred” their stance on ordaining homosexuals.

Below is the Primates 2016 statement, and the GAFCON response, in full:

Today the Primates agreed how they would walk together in the grace and love of Christ. This agreement acknowledges the significant distance that remains but confirms their unanimous commitment to walk together.

The Primates regret that it appears that this document has been leaked in advance of their communiqué tomorrow. In order to avoid speculation the document is being released in full. This agreement demonstrates the commitment of all the Primates to continue the life of the Communion with neither victor nor vanquished.

Questions and further comments will be responded to at a press conference tomorrow at 1500. Full details are available here.

The full text is as follows:

1. We gathered as Anglican Primates to pray and consider how we may preserve our unity in Christ given the ongoing deep differences that exist among us concerning our understanding of marriage.

2. Recent developments in The Episcopal Church with respect to a change in their Canon on marriage represent a fundamental departure from the faith and teaching held by the majority of our Provinces on the doctrine of marriage. Possible developments in other Provinces could further exacerbate this situation.

3. All of us acknowledge that these developments have caused further deep pain throughout our Communion.

4. The traditional doctrine of the church in view of the teaching of Scripture, upholds marriage as between a man and a woman in faithful, lifelong union. The majority of those gathered reaffirm this teaching.

5. In keeping with the consistent position of previous Primates’ meetings such unilateral actions on a matter of doctrine without Catholic unity is considered by many of us as a departure from the mutual accountability and interdependence implied through being in relationship with each other in the Anglican Communion.

6. Such actions further impair our communion and create a deeper mistrust between us. This results in significant distance between us and places huge strains on the functioning of the Instruments of Communion and the ways in which we express our historic and ongoing relationships.

7. It is our unanimous desire to walk together. However given the seriousness of these matters we formally acknowledge this distance by requiring that for a period of three years The Episcopal Church no longer represent us on ecumenical and interfaith bodies, should not be appointed or elected to an internal standing committee and that while participating in the internal bodies of the Anglican Communion, they will not take part in decision making on any issues pertaining to doctrine or polity.

8. We have asked the Archbishop of Canterbury to appoint a Task Group to maintain conversation among ourselves with the intention of restoration of relationship, the rebuilding of mutual trust, healing the legacy of hurt, recognising the extent of our commonality and exploring our deep differences, ensuring they are held between us in the love and grace of Christ.

The Anglican Communion is our spiritual home and the GAFCON Primates travelled to England in the hope that godly faith and order could be restored through renewed obedience to the Bible.

We are pleased that Archbishop Foley Beach of the Anglican Church in North America has played a full part in the Canterbury meeting of Primates and that sanctions have been applied to the Episcopal Church of the United States, (TEC) recognising the need for mutual accountability on matters of doctrine within the family of the Communion.

However, this action must not be seen as an end, but as a beginning. There is much that causes us concern, especially the failure to recognise the fact that the Anglican Church of Canada (ACoC) has also rejected the collegial mind of the Communion by unilaterally permitting the blessing of same-sex unions and the ordination of those in active homosexual relationships. We fear that other provinces will do the same.

Since the beginning of the crisis in the Communion brought about by the actions of both TEC and the ACoC, the Anglican instruments of unity have been unable to guard biblical truth and restore godly order. There must therefore be doubt about the effectiveness of the sanctions that have been agreed.

In particular, it must be recognised that the continuing brokenness of the Communion is not the result simply of failed relationships, but is caused by the persistent rejection of biblical and apostolic faith as set out in Lambeth Resolution 1.10. We are therefore disappointed that the Primates’ statement makes no reference to the need for repentance.

The need for the GAFCON movement is being recognised by an ever increasing number of people and we are encouraged in our conviction that God has called us to work for an Anglican Communion which is a truly global family of Churches. We long to see a united, confident and courageous witness to God who by the death and resurrection of his Son Jesus Christ has given us an unshakeable hope and assures us of his unfailing love.