A once-popular religious freedom law is now seen as license to discriminate.
Bob Smietana|April 1, 2015 11:26 AM 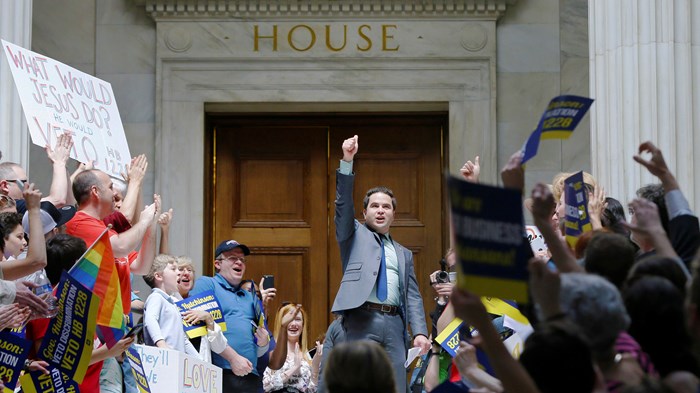 Supreme Court Justice Antonin Scalia once warned that too much religious freedom would be “courting anarchy.”

This week, his prophecy came true—at least on the airwaves and in social media.

Supporters like Indiana Gov. Mike Pence say the law is needed to protect believers who feel under siege.

In the wake of the controversy, governors in Connecticut, Washington, and New York banned state employees from traveling to Indiana, while Star Trek actor and Twitter celebrity George Takei organized a #BoycottIndiana campaign. Corporate giant Wal-Mart, headquartered in Arkansas, has asked that state’s governor to veto the bill on his desk.

Under pressure, Pence has asked lawmakers to revise the law so that it can’t be used to discriminate.

Still few critics, as The Washington Post points out, seems to know or care what the law in question actually says. They just want to fight about it.

At the heart of the issue: the once-obscure federal RFRA law, which was signed into law in 1993 by President Bill Clinton, with broad support from Democrats and Republicans alike. Similar laws have been passed in 20 states, including one in Illinois that then-state-senator Barack Obama voted for.

The law protects religious minorities such as the Amish, Sikhs, and prisoners whose beliefs clash with federal or state laws.

“Because of RFRA, we don’t let whatever bureaucrats happened to be in power decide who gets religious liberty,” said Adèle Auxier Keim, counsel for the Becket Fund for Religious Liberty.

RFRA was passed in the wake of Employment Division v. Smith, a US Supreme Court case involving two Native American counselors who were fired for using peyote during religious rituals. The court ruled that religion was no excuse for breaking a law banning the drug’s use.

Scalia, who wrote the majority opinion in Smith, argued that allowing people to disobey the law on religious grounds would lead to chaos.

Instead of chaos, said Keim, RFRA created an orderly way for courts to resolve disputes involving religious liberty. She argues that it balances the government’s compelling interests while protecting religious rights.

The dispute over RFRA in Indiana and Arkansas isn’t the first time the law has caused controversy. In the mid-1990s, the Catholic Archbishop of San Antonio sued local officials using RFRA, after they blocked his attempt to expand a church in a historic district. Justices in that case ruled that RFRA didn’t apply to states.

Marci Hamilton, professor of public law at Yeshiva University, was the attorney for the city that opposed the church expansion. She’s become a leading critic of RFRA, and argues that the law was unconstitutional from the start. Now, she says, state lawmakers have turned the law into a tool for intentional discrimination.

“The original federal RFRA was misguided and a leap from prior First Amendment doctrine,” she wrote on her blog about the Indiana law, “but it was nothing like this new iteration in the conservative states.”

Lawmakers tinkering with the RFRA language in recent years have turned it into a political minefield, says J. Brent Walker, executive director for the Baptist Joint Committee for Religious Liberty, which has supported RFRA laws since the 1990s. The 1993 version protected believers against the government. Some newer state versions also protect corporations, and can be used in civil lawsuits between individuals.

Walker says now it’s time to take a break, since RFRA’s reputation has taken such a hit.

“I hate to say, ‘Take a deep breath,’ since it such a cliché,” he said. “But maybe we should take 100 deep breaths. Let’s hold off for a little while. In this toxic political environment, things will blow sky high.”

Current RFRA laws, like those in Indiana and Arkansas, were passed in the wake of legalized same-sex marriage. That was bad timing, said Walker, and led to accusations that RFRA is intended for discrimination against gays.

No judge is going to accept that faith allows people to discriminate, said Walker.

“RFRAs are not designed to allow people to discriminate,” he said. “The courts are almost certain to find that the state has a compelling interest in preventing discrimination.”

He thinks that those with religious objections to same-sex marriage should wait till the Supreme Court rules on the matter. Then they can sit down with those who support same-sex marriage and work out a compromise that works for everyone.

What to do with marriage is the big issue, he argued.

“The Christian ice cream shop is not going to turn away a gay couple,” he said. “A Christian car dealer is still going to sell cars to gay people. But baking a wedding cake, where you may have to take part in the ceremony or event, is something different.”

University of Illinois law professor Robin Fretwell Wilson says that faith groups and supporters of same-sex marriage don’t need to be enemies. The rights of both can be protected within the law, she argues.

Wilson’s been a proponent of the approach taken by Utah, which passed laws banning discrimination against gays and lesbians, while also providing exemptions for religious groups.

She said that the feud over RFRA and discrimination is regrettable.

“If there is one thing to regret here, it’s that we have to be at each other’s throats all the time,” she said. “It’s unnecessary. It doesn’t have to be that way.”

Wilson believes supporters of RFRA have a lot of work to do after the Indiana debacle.

“Setting the record straight is going to be a slow process,” she said.

Indiana could follow the example of neighboring Illinois, which passed a RFRA law in the 1990s, and more recently, added protection for gays and lesbians. The dispute over RFRA gives lawmakers a chance to make peace for advocates of both religious freedom and equal protection laws for gays.

“The opportunity here is to be statesmen and to say, ‘There is a missed opportunity in our law. We mean to fill it. We hope people will trust us, that we were doing it for the right reason—because it’s needed,’” Wilson said.

Some supporters of Indiana’s RFRA are more skeptical.

Russell Moore, president of the Southern Baptist Convention’s Ethics and Religious Liberty Commission, doesn’t see much chance for peace between RFRA supporters and foes. The dispute runs much deeper than one law.

Moore argues that RFRA is meant to protect religious minorities and unpopular beliefs. That’s something everyone should support, he argued.

He also thinks that Utah’s approach is doomed to fail.

“I am afraid that there all kinds of unforeseen consequences for religious liberty,” he said. “I hope I am wrong.”

In an op-ed for USA Today, Boston University professor Stephen Prothero lamented the loss of concern for religious liberty in the debate over the Indiana law.

“I support gay marriage,” he wrote. “I support anti-discrimination laws protecting lesbian, gay, bisexual, and transgender (LGBT) citizens. But I also support religious liberty. These commitments sometimes conflict. But it is a sad day when there is so little support for the liberties of US citizens, especially among liberals who should be their staunchest defenders.”