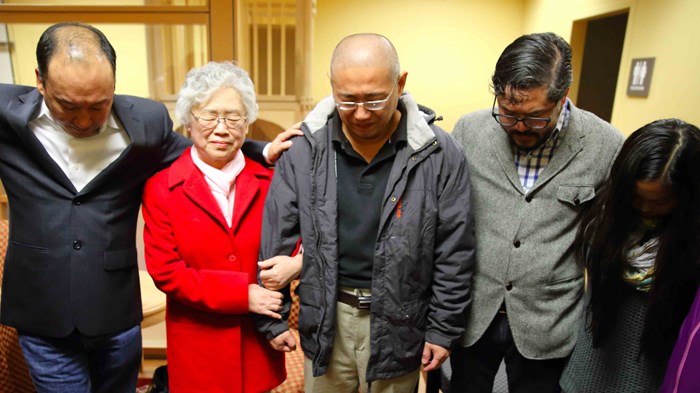 Update (Nov. 10): At a news conference, Kenneth Bae thanked his supporters for "lifting me up and not forgetting me" during his long captivity in North Korea. "It's been an amazing two years," he said. "I learned a lot, I grew a lot, lost a lot of weight—in a good way—but I'm standing strong because of you."

“He still has a tremendous heart for the people of North Korea,” Bae's sister, Terri Chung, told reporters outside her Seattle church, Quest Church. “He only has the best wishes and intentions for that country, still.”

Quest pastor Eugene Cho shared via Twitter and Instagram a photo of Bae and his mother praying. "Prayer matters. It's a reminder of God's presence," he wrote. "Prayer sustained Kenneth Bae in NK. After he came home, we prayed." Cho, whose parents were born in North Korea, also reflected on praying for the country and its Christians.

Good news for concerned Christians observing Sunday's International Day of Prayer for the Persecuted Church (IDOP): Missionary Kenneth Bae, the longest-imprisoned American in North Korea since the Korean War, has finally been freed after two years.

"The day we’ve been praying for has finally arrived," wrote Bae's sister, Terri Chung, in a public statement. "Words cannot adequately express our relief and gratitude that Kenneth is finally coming home. We have been waiting for and praying for this day for two years. This ordeal has been excruciating for the family, but we are filled with joy right now." 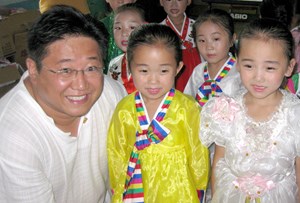 Bae regularly led orphan-focused tours into North Korea from China. North Korea claimed he was working for YWAM (Youth With a Mission) and sentenced him to 15 years of hard labor. More than 175,000 people petitioned for his release.

The Associated Press, CNN, The New York Times, Reuters, and the Christian Science Monitor report the details of Bae's release today alongside another imprisoned American, Matthew Todd Miller. CNN, which was allowed by North Korea to interview Bae in September, profiled him in January.

CT has followed Bae's two-year saga in North Korea since his November 2012 arrest, including his deteriorating health, how his mother was allowed to visit last fall, and how at one point not Jimmy Carter but Dennis Rodman was a potential avenue for his release. (Rodman is taking some credit for today's release.)

"At more than 730 days, Bae's imprisonment was the longest on record for an American citizen in North Korea," claimed International Christian Concern (ICC). On November 3, the anniversary of Bae's imprisonment, his supporters launched a renewed #BringBaeBack advocacy campaign:

Still imprisoned by North Korea is a South Korean Baptist missionary, Kim Jong-Uk, who received a life sentence in June for allegedly working with underground churches.

"We believe that God is with people who endure hardship, and that He never leaves them," wrote Chung. "It is with great joy and with thankfulness to God to see Kenneth released. Our family could not have been sustained without the knowledge that Kenneth was in God’s care, when it seemed we were helpless to do anything."

Last month, North Korea released another imprisoned American Christian. Jeffrey Fowles of Ohio was jailed for leaving behind a Bible; he told the Wall Street Journal that he hoped it would reach the "hands of the underground church." "I was motivated by the stories I had heard of the severe persecution of the underground Christian church there," he told ABC News.

In March, the Communist kingdom released a 75-year-old missionary, John Short of Australia, after arresting him for 13 days for distributing tracts at a Buddhist temple in Pyongyang on Kim Jong-il's birthday. His wife told Reuters after his arrest, "I'm not upset. We're Christian missionaries."

American Christians previously held by North Korea include activist Robert Park, who was imprisoned in North Korea for seven months in 2010. Park entered the country without authorization intending to be arrested, but told CT after his release that he never wanted anyone else to enter the country as he did.

The US State Department welcomed Bae and Miller's release Saturday, and reiterated its "strong recommendation against all travel by U.S. citizens to [North Korea]."

North Korea has long topped Open Doors's ranking of the 50 countries where it's hardest to be a Christian. CT has noted the prospects for Christians under Kim Jong-eun, the region's underground railroad, and how Christians are teaching the Dragon. Carl Moeller, former CEO of Open Doors USA, shared with CT his top five books on Christianity in North Korea.

CT's previous coverage of the International Day of Prayer includes a cure for its holiday blues.

1 of 2
Bae with North Korean childrenBae in China
expand