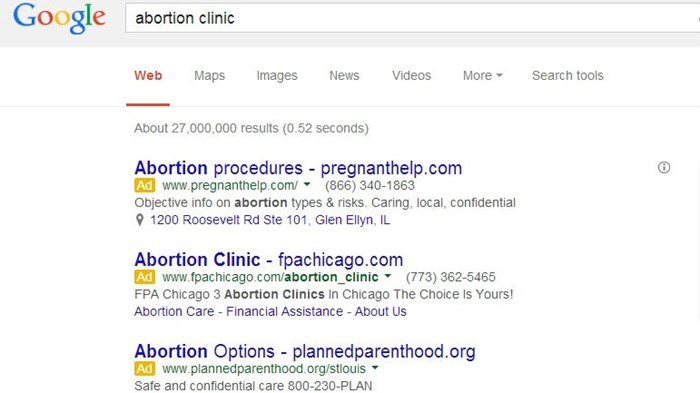 In a statement given to The Hill and CNET, Yahoo said:

Meanwhile, CareNet Pregnancy Services of DuPage, a pro-life pregnancy center with more than 1,100 affiliates across the country, has declared that Google has not taken its ads down, and applauded the search engine for its vigilance in maintaining the honesty of CPCs.

"CareNet's ads have not been rejected by Google; they are both informative and accurate," said Barbara Singer, president of CareNet. "CareNet Pregnancy Services of DuPage offers women free services that are truthful, helpful, and promote real choice. Abortion facilities such as Planned Parenthood are not objective, since they stand to gain financially by selling abortion."

Google has removed many ads for crisis pregnancy centers from its search results over complaints that the ads are deceptive.

At least, according to NARAL Pro-Choice America, which claimed this week that nearly 8 in 10 ads displayed on Google searches for "abortion clinic" are funded by pro-life groups misrepresenting the actual services they offer.

The pro-choice group claims it has persuaded Google to remove the majority of the problematic ads from crisis pregnancy centers (CPCs). "We will continue to work with Google to ensure that their commitment results in women being directed to the resources and services they are seeking when they search online, ending this manipulation of women making vital health decisions," said NARAL president Ilyse Hogue.

But some pro-life groups claim their ads have not been affected, reports LifeSiteNews. Online for Life was not aware of any removed ads, and says it has a "long and positive relationship with Google." Heartbeat International told America's largest pro-life group, the National Right to Life Committee, that the CPC is "well-versed in using Google AdWords effectively" and its guidelines prohibited misleading ads.

The true fate of CPC search ads is hard to measure. What isn't is the recent number of court cases favoring how crisis pregnancy centers present themselves.

CT has reported how disclosing information to pregnant women—a long-established pro-life legal strategy—has been cutting both ways as a number of cities have passed laws requiring CPCs to disclose that they don't provide abortions or have medical staff. But courts continue to overturn many such requirements.

In March, a Maryland federal district court struck down a county requirement that crisis pregnancy centers post signs in their waiting rooms declaring "the Center does not have a licensed medical professional on staff." The court said the requirement was a "content-based regulation that compels non-commercial speech," notes Religion Clause.

Earlier this year, the Second Circuit Court of Appeals ruled that crisis pregnancy centers in New York City are not required to admit they do not perform abortions or abortion referrals. However, centers must now state that they do not have doctors on staff.

CT regularly reports on the pro-life movement and crisis pregnancy centers, including how the centers have cried foul to the push by abortion supporters for more information disclosure.