Last summer, I was on vacation with my family in Seville, Spain, and we ordered a traditional paella. To my surprise and amusement, it arrived at our table topped with a rabbit head.

Our meal reminded me of the popular Sichuan delicacy of spicy rabbit head and brought back memories of my childhood. I grew up in Chengdu, a city known for its mouthwatering food. We were poor, but on occasion, my grandma would buy me a rabbit head to snack on as a treat. It cost only six Chinese cents, but it would bring me so much joy.

According to the Chinese zodiac, 2023 is the Year of the Rabbit. The dinner on the Chinese New Year Eve is the most important meal of the year for Chinese. I wondered on that evening this year how many Chinese families’ feasts will include rabbit. Of course, not all Chinese eat rabbit head, as the sight of it on a table is not necessarily all that appealing.

In China, the lunar New Year’s Day is the first day of chun jie, or Spring Festival, which lasts for a half month. This year, Chinese New Year’s Day happens to fall on a Sunday (January 22). I wondered if Chinese church pastors and leaders would preach about the Chinese New Year and if they would mention rabbit in their sermons.

Christ has made rabbits clean

A few Chinese preachers I spoke with told me that they would likely mention the lunar New Year and say a few blessing words, but they do not plan to preach specifically about rabbit.

It is not unusual for Chinese preachers to give a sermon about the lunar New Year around Spring Festival. But older generation Christians in conservative Chinese house churches would regard the Chinese zodiac as a superstition that is harmful to the spiritual life of believers. Therefore, sermons mentioning the Chinese New Year would typically not touch on the animal of the year.

Some of such sermons would mention the Old Testament Passover story because of its connection to lunar New Year and to the Chinese practices of celebrating chun jie, such as putting chun lian (red couplets of blessing words) on both sides of the doorframe–reminding people of the Israelites putting blood on both sides of the doorframe on Passover night (Ex. 12:22). Other Chinese pastors may preach from the Chinese New Year custom of putting on new clothes to the biblical teaching for Christians “to put on the new self” (Eph. 4:24) and “clothe yourself with the Lord Jesus Christ” (Rom. 13:14).

But no preacher would preach about rabbit just because it’s the Year of the Rabbit. There is simply not much for a Christian to preach about rabbit. There are only two verses in the Chinese Bible that mention rabbit (Lev. 11:6 and Deut. 14:7), so it’s too difficult to connect rabbit to the Christian faith without stretching it. (Wen-lian Chang, a well-known Taiwanese Christian writer and former environmental science professor, did write an article about the uncleanness of rabbit as food, but he was giving scientific explanations for the uncleanness, saying that “rabbit carries the most parasites and viruses in its body among the world’s grass-fed animals.”)

However, this is not to say that the long-eared animal has nothing to do with the Christian faith. 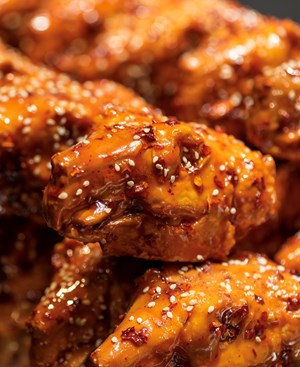 Both verses that mentioned rabbit are part of the Mosaic laws about food in the Old Testament. Both say that rabbits are “unclean,” just like pigs, so their meats should not be eaten as food. This would easily bring up a faith-related question: Aren’t Christians supposed to obey God’s laws? How can Christians eat rabbit or pork (the most consumed kind of meat for Chinese), against the food laws in the Old Testament?

The answer to this question is in the Gospel of Christ. The key to understanding the Mosaic laws is that they are “the shadow of Christ,” as Vern Poythress explained in The Shadow of Christ in the Law of Moses. The ceremonial laws of cleanness and uncleanness in the Old Testament “signify and foreshadow the way in which God cleanses sin.” But God’s redemption is fulfilled by Christ and his crucifixion. Consequently, “all foods are cleansed by the Word of God and by prayer now offered in the name and power of Christ.” The Mosaic laws are a foretaste of the saving grace of Jesus Christ as the ultimate atoning and redeeming sacrifice.

That is why Jesus, who told the disciples he came not to abolish but to fulfill the Old Testament law (Matt. 5:17-18), taught them that all foods were to be reckoned clean (Mark 7:19). In Acts 10, God told Peter three times to eat all kinds of animals, including those that the disciple considered unclean, and indicated he should not “call anything impure that God has made clean.” (Acts 10:15) The apostle Paul said that although the heretic “hypocritical liars” ordered believers “to abstain from certain foods”, “everything God created is good, and nothing is to be rejected if it is received with thanksgiving” (1 Tim. 4:2-4).

So, the essence of Christian faith is not about the religious regulations of not eating this or not touching that. The Gospel of Christ has set us free, and we have freedom of conscience when it comes to food. Although eating and drinking is taken seriously for the Spring Festival celebration in the Chinese culture, “the kingdom of God is not a matter of eating and drinking, but of righteousness, peace and joy in the Holy Spirit” (Rom. 14:17).

This also means that we should not abuse our Christian freedom. “‘I have the right to do anything,’ you say–but not everything is beneficial” (1 Cor. 6:12). If eating rabbit head causes my brother or sister to fall (because it is too gross or unhealthy for them), I will not eat rabbit head.

It is customary for the Chinese to say blessings related to the zodiac animal of the lunar year, but for the Year of the Rabbit, a lot of the popular contemporary sayings are just homophonic puns containing tu (兔), the Chinese word for rabbit. They don’t have any zodiac significance or reference. (And some of them may not be appropriate for Christian preachers to use in their sermon.)

Thankfully, few Chinese, especially among the young generation, take such astrological advice seriously. But Chinese people in China have experienced three difficult years due to COVID and their government’s response to the pandemic. The danger is such negative superstitious “information” could cause psychological damage and pull people deeper into a pit of despair.

For us Chinese Christians, the good news is that the Gospel truth has set us free from the fear of misfortune. Because of Christ’s crucifixion and resurrection, our sins are forgiven, and we now have the Christian freedom from the bondage of sin and from cultural superstitions. The plans God has for us are plans to prosper us and not to harm us (Jer. 29:11). Just like Christ has made all food clean, he has also given us the ultimate blessing of salvation that overcomes bad omens.

So, at the start of this Year of the Rabbit, let us share the real good news:

Go ahead, enjoy eating rabbit—or beef steak, or healthy Chinese vegetables of your choice. Gladly and boldly ignore the superstitious warnings of zodiac misfortunes. And give thanks to Jesus, the source of true heavenly blessings.