I was born in 1989 into a dysfunctional home in Glendale, Arizona. Alcohol and drug abuse had plagued our family for generations. My late father’s addictions earned him a revolving door in and out of prison. My mother got pregnant at 19 after running away from her own father’s abusive behavior. She raised me as a single parent, alongside live-in boyfriends. We moved frequently.

Having witnessed the horrors of drug and alcohol abuse firsthand, I entered junior high school vowing never to take drugs—at least until a fellow eighth-grader kept badgering me to try a marijuana joint at the school bus stop. I gave in, enjoying the thrill. But I told myself I would just smoke pot. Nothing else.

Desperate for love, I became sexually active at 13 and contracted a nasty STD two years later. I got hooked on alcohol from one drink at a high school party. Doing cocaine and methamphetamines followed. By age 15, I had quit high school and left home for a friend’s trailer, crawling with cockroaches and hungry mice, where I lived with a 19-year-old boyfriend.

Around that time, one of my mother’s boyfriends moved in with her. (They would later marry and have two sons.) Weary of wasting their lives with drugs and alcohol, they sought help. My mother gradually sobered up through Alcoholics Anonymous. Looking to escape the junk and craziness in Arizona, she decided to move us to New York state during the summer of 2007, when I was 17.

During our road trip north, I gobbled pills from a stash I had hidden. Upon reaching Tennessee when the pills were gone, I went crazy at rest stops searching for refills.

We ended up in Clinton, New York, a small village upstate. Again, I fell in with the wrong crowd after finding a job at a local pizza shop. I started dating a new boyfriend, Kirk, a drug dealer, and shortly thereafter I moved into his apartment. Daily bouts of drinking and drugs cemented our relationship.

One evening, out of nowhere, my mother invited me to her home for a lasagna dinner, one of my favorite meals. It was February 2008, and I had been feeling nauseous for several weeks. I remember asking myself, “Why is this hangover not going away?”

Before dinner, my mother urged me to the upstairs bathroom. She quickly locked the door and opened a small package. “You are going to take this pregnancy test,” she demanded, “and I am going to sit right here while you do it.”

We waited impatiently for the result—it was positive. The next moment I shut down, disbelieving and crying. A baby was growing inside me. But I was in no shape to give birth or care for a child. I was 18 and heavily addicted, with no car, no job, and no money.

Unprepared to become a father, Kirk offered to pay $400 so I could get an abortion. With everyone whispering abortion in my ears, I thought it was my only logical option. On some level, I figured I was doing my baby a favor. Drug addicts should never be parents, I reasoned, and I was certain I would be a terrible mother. Most of all, I feared repeating my family’s dysfunctional cycle by having another child just like me—in other words, another fatherless mess.

Deep down, and despite all my hesitations, I still wanted this baby. Nevertheless, I decided on abortion. Nothing could change my mind.

Meanwhile, my mother experienced a strange incident while attending a 12-step AA meeting. A stranger walked over to her and gave her a note with a phone number on it. “Call the number tomorrow and take your daughter there,” he said.

It was the number for a local crisis pregnancy center.

My mother told me she was making an appointment to a pregnancy center. Not knowing any better, I believed the center performed abortions rather than discouraging them. As I walked inside, my heart pounded out of my chest. I felt alone, ashamed, embarrassed, and afraid.

I met a counselor who immediately made me feel comfortable and safe. After telling her that I wanted an abortion, she described the process of fetal development. For the first time, I learned about the stages of life after conception. She also reviewed a brochure explaining abortion procedures, including the physical and emotional risks.

The counselor arranged an ultrasound appointment, where for the first time I saw my baby moving all over the screen, so full of life with a strong heartbeat. What made the deepest impression, though, was the counselor’s story of being pregnant at 17 and opting to keep her baby. She told me she had surrendered to the Lord, who had blessed her with new life.

At this time in life, I was a Christian only in the barest sense—which is to say, not really at all. When I was an infant, my maternal grandmother had implored a cowboy pastor in Arizona to dedicate me to the Lord. I attended a church camp in Prescott, Arizona, where I gave my life to Christ when I was nine. Although I never committed myself to following God, I had cried out to him many times while coming down from a drug high. Somehow, I still knew he was real and represented the father I had missed. 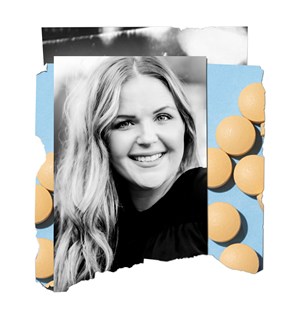 I left the pregnancy center that day reassured that I could choose life. The counselor’s story had given me a glimmer of hope that God was watching over me and my baby.

At the urging of my parents, I went to rehab for three weeks to sober up and be clean for my unborn child. A rehab nurse rattled me, stressing how my heavy drinking, smoking, and cocaine use during the first eight weeks of my pregnancy had injured the baby. Perhaps for life. “The damage is done,” she said.

Despite her foreboding, I held on to hope that God had a different plan. I relied on Jeremiah 29:11: “‘For I know the plans I have for you,’ declares the Lord, ‘plans to prosper you and not to harm you, plans to give you hope and a future.’” That trust seemed vindicated when Kirk called to say he was ready to be a dad and wanted to raise our baby together. I was beyond excited and thankful.

He stopped using hard drugs and selling them and began searching for a real job for the first time in years. On October 3, 2008, after 24 hours of hard labor, our daughter Preslee Olivia was born. She was heathy at eight pounds and three ounces. Holding her for the first time changed our lives forever.

Kirk proposed to me a month later. But we waited two years before marrying, because we were struggling to live together and share the new responsibility for Preslee.

I also relapsed during this turbulent period. At a friend’s wedding reception, I took just one drink, which restored my craving for alcohol. Soon enough, I was drinking and smoking pot again on a regular basis. I feared the authorities might take Preslee away from me.

I was learning the hard way that having a baby wouldn’t fill the void in my heart and make everything fine again. My biggest problem, though, was that I had not totally surrendered my life to Christ.

The pregnancy center ladies helped me overcome my weaknesses. They discipled me and encouraged me to attend church services and weekly Bible studies. They never stopped praying for me, and they always assured me that “God has had his hand on your life.”

Finally, one night in December 2010, I was lying alone on the floor when I gave up, holding my Bible and crying out for forgiveness. God lifted the heavy weight of addiction off my shoulders. I entered the new year set free, a new creature in Christ. My life changed radically.

Since that time, I have never touched alcohol or drugs. Kirk also surrendered his life to Christ. Including Preslee, we have been blessed with five beautiful children.

I can never thank my pregnancy center sisters enough! They went far beyond giving me cartons of diapers and toilet paper, as essential as that was. In the end, they showed me how to become a godly wife and mother. It has been a joy and privilege to give my testimony at many pregnancy center banquets, on national speaking tours, and in churches.

While caring for our children, I’ve continued to support crisis pregnancy centers, where I help women struggling with unplanned pregnancies, abusive relationships, and addictions. My life may have been messy, but now I am a daughter of the King, forgiven and clean.