And other news briefs from Christians around the world.
Daniel Silliman|October 3, 2022
Image: Source: Getty / Google

An evangelical school in Georgia has seen a dramatic increase in online enrollment from a cooperative agreement with Chick-fil-A franchises. The owners of the fast-food chicken resturaunts pay a flat fee that allows all their employees to attend online classes for college credit at Point University. Chick-fil-A then uses that as an incentive to recruit and retain workers. Chick-fil-A CEO Andrew Cathy is on Point’s board, but the arrangement is not with corporate. The program is being expanded to other businesses as well. When the program launched this fall, Point’s online enrollment increased from about 500 to more than 1,200. Sixty-five percent of evangelical colleges have seen enrollment numbers drop since 2014.

An Illinois health care system is settling a lawsuit with employees who were denied religious exemptions to COVID-19 vaccines. More than 500 employees requested religious exemptions but were told NorthShore University HealthSystem did not grant them, per a university policy. Nearly 300 resigned or were fired. If the terms of the $10.3 million agreement are approved by a federal court, those who complied with the vaccination requirement to keep their jobs will receive about $3,000 each, while those who lost their jobs will get around $25,000. This is the first class action settlement for health care workers claiming discrimination in COVID-19 mandates. 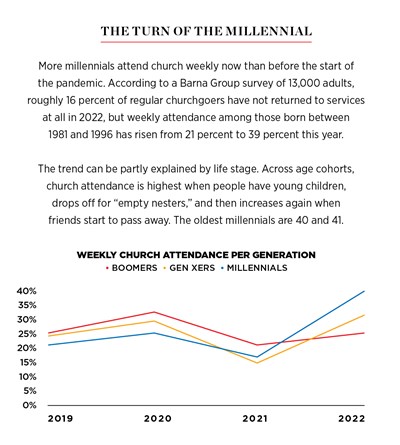 A group of evangelical leaders and pastors objected to the proposal of a new constitution in Chile. They say it includes “extreme ideology” and increases division by recognizing 11 different groups while not acknowledging evangelicals. The new constitution would guarantee seats in parliament to LGBT people, secure land for indigenous people, and grant rights to sentient animals. It would also restrict religious freedom and eliminate parental rights over the education of children. If ratified, the constitution would replace the charter established by the dictatorship of Augusto Pinochet.

The European Union (EU) has a new special envoy on religious freedom or belief. Mario Mauro, a Roman Catholic, has previously worked as a history professor and a representative to the European Parliament, where he made a name for himself defending religious freedom. Human rights groups and the European Evangelical Alliance have argued the EU does not pay enough attention to religious liberty.

A statue of Malawian anticolonial leader and Baptist pastor John Chilembwe will be placed in Trafalgar Square, London, for two years. The artwork restages a 1914 photo where Chilembwe did not take off his hat in front of a white missionary, violating British law. Chilembwe died the following year leading the first pan-African uprising that united people across tribal lines. Chilembwe was trained at a Baptist seminary in the US and inspired by egalitarian Baptist theology.

Four Christians were arrested for apostasy in the Darfur region, even though the law criminalizing apostasy was repealed in 2020. The four men converted from Islam and were holding church services. Police seized their Bibles and loudspeakers and, after releasing them from jail, ordered the believers to leave the area. The Islamist dictatorship of Omar al-Bashir ended in 2019, and the transitional government has instituted some religious reforms, including ending the death penalty for conversion. But Christians fear some officials will try to reinstate the oppressive religious laws. Christians make up about 4.5 percent of the population in Sudan.

Police have traced the first Tamil-language Bible, stolen by foreign visitors in 2005, to the King George III Museum in London. They have reported the theft of the cultural heritage to the UN and hope the Scripture will be returned soon. The Bible was translated and printed by Danish missionary Bartholomäus Ziegenbalg in the 1710s and subsequently given to Tulaji Rajah Serfoji, ruler of Tanjavur. The “Idol Wing” of the state police took over the investigation in 2020 and tracked down the 250-year-old Scripture by doing internet searches for museums with Ziegenbalg’s name in their holdings.

@Danielsilliman
This article is from the October 2022 issue.