Prohibition: A Movement of Prudish Killjoys or Righteous Revolutionaries?

That’s what the true villains of the story would want you to think, or so Mark Lawrence Schrad argues in his new book, Smashing the Liquor Machine: A Global History of Prohibition. Taking aim at the widespread perception that temperance movements were all about “moralizing ‘thou shalt nots,’” he proclaims that they were, on the contrary, “a progressive shield for marginalized, suffering, and oppressed peoples to defend themselves from further exploitation.”

Crucially, in Schrad’s telling, prohibition was never about raining on the individual drinker’s parade. Rather, it was a tactic to combat predatory liquor traffickers and the empires that benefited from their nefarious work. It is only because the capitalists and imperialists so often prevailed in these struggles, Schrad suggests, that we remember temperance activists as prudish killjoys rather than righteous revolutionaries.

United States historians have tended to reinforce such misconceptions, Schrad contends, because they have usually failed to view American temperance movements in wider world context. To be sure, this is not easy to do. For Schrad it meant tracking down leads in 70 different archives housed in 17 different countries and strewn across five continents. But the payoff of that hard work is tremendous: a story that is, as the subtitle promises, truly global.

One of its central themes is that alcohol—and especially distilled liquor—functioned as a powerful tool of empire. This was in no small part because the sale of spirits kept the ruling class’s coffers full. In Tsarist Russia, Schrad observes, “the vodka monopoly was the largest source of imperial finance.” But booze was more than just a moneymaker. It also facilitated what he calls the “alco-subjugation” of the world’s peoples, many of whom had no prior exposure to “industrial alcohols.” Everywhere distilled liquor was introduced, epidemics of intoxication and addiction followed, rendering entire societies ripe for conquest. In this sense, “colonialism in Africa, Asia and North America was achieved with bottles as much as bullets,” Schrad states.

Little wonder that, across the globe, temperance and anti-imperialism activism were so often of a piece. In the years just before Ireland’s Great Famine, Father Theobald Matthew traveled the countryside and collected an astounding 5.5 million temperance pledges, building a movement that became closely associated with the fight for Irish independence. In early-20th-century Russia, Vladimir Lenin and the Bolsheviks urged the masses to abstain from vodka in a bid to starve the regime of revenue. South Africans registered their objections to colonial rule in the 1920s and 1930s by boycotting beer halls, while in India, for Hindu and Muslim dissenters from the British Raj, “abstinence became synonymous with patriotism.”

Notably, Schrad goes on to argue, the United States was not an exception to this global rule. Here, too, temperance movements were powered not by stern divines and dour church matrons but by staunch defenders of the poor and the oppressed. Indigenous leaders led the charge, with the Choctaw, Cherokee, Chickasaw, Creek, and Seminole tribes, for example, agreeing to “cooperate in suppressing the sale of strong drink.” Similarly committed to the cause were abolitionists, women’s rights activists, social gospelers, and more. Indeed, Frederick Douglass’s line, “All great reforms go together,” is one of Schrad’s favorite mantras. He supports this claim by underscoring the temperance credentials of not only Douglass but also the likes of William Lloyd Garrison, Susan B. Anthony, and Abraham Lincoln. “These are the heroes of American history, not its villains,” Schrad declares.

There is no doubt that he has a point. Smashing the Liquor Machine’s provocative reframing of temperance and Prohibition as “part of a long-term people’s movement to strengthen international norms in defense of human rights, human dignity, and human equality” represents a persuasive challenge to conventional wisdom. It should change the way that historians think and write about these subjects going forward. But one wishes that Schrad had not been content to flip an unsatisfying script. What if temperance activists were neither heroes nor villains, but rather finite, fallible humans, fighting for what they understood to be right, even as they were caught up—in ways that they did not fully recognize—in deeper-seated social sin? 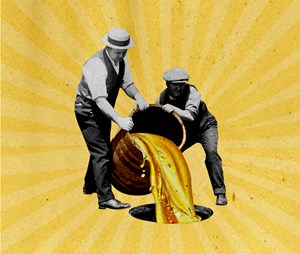 One of the great tragedies of American history is that, whatever Douglass’s noble aspirations, all great reforms have not in fact gone together. One finds some evidence of this in Schrad’s book, notwithstanding his assertions to the contrary. In a chapter on the Women’s Christian Temperance Union (WCTU), he discusses how the organization’s leaders sought to navigate the racism that was so pervasive among its white rank-and-file members, and also how the WCTU leadership was itself hardly immune. Longtime president Frances Willard loved to tout her abolitionist heritage and “Do Everything” reform philosophy; but while she championed the causes of women’s suffrage and labor reform, one thing she refused to do was support Ida B. Wells’s courageous campaign to mobilize white Christians against the scourge of lynching.

Willard’s failings on this front were hardly unique. Another of Schrad’s temperance heroes, William Jennings Bryan—or the “Great Commoner,” as he liked to be called—was a fierce defender of white farmers and workers at home, and a ferocious critic of American imperialism abroad. But when President Theodore Roosevelt invited Booker T. Washington to the White House for dinner, Bryan declared it “unfortunate, to say the least.”

Walter Rauschenbusch, one of the great theoreticians of the social gospel, provides yet another case in point. As Schrad underscores, in addition to propounding temperance, Rauschenbusch wrote voluminously about the threat of spiraling economic inequality. Yet he said next to nothing about the rising tide of mob violence and anti-Black racism. As he reflected in the final decade of his life, “the problem of the two races in the South has seemed to me so tragic, so insoluble, that I have never yet ventured to discuss it in public.”

The issue is not only that many temperance reformers fell short of heroism when it came to other causes. It is also that the temperance fight itself was more morally complex than Schrad allows. There was unmistakable synergy, for one, between campaigns against “the liquor power” and others targeting Catholics, immigrants, and labor radicals. The Germans who participated in Chicago’s Lager Beer Riot of 1855—sparked by a nativist mayor’s decision to close taverns on Sundays and to raise the fee for liquor licenses—felt this viscerally, but the perspective of working-class immigrants like them is largely absent from Schrad’s narrative.

Also missing are the important ways in which the brunt of temperance activism fell not only on “the man who sells” but also on countless ordinary people. The heyday of temperance reform was, not coincidentally, also the heyday of “scientific charity,” whose proponents often saw anyone who frequented the saloon as unworthy of material aid.

Saloons themselves were more complicated than Schrad lets on. Waving off the suggestion that they might have had redeeming features, he insists that they must be understood as “an actual, real blight on the local community.” At points his description sounds a lot like what one might find in a late-19th-century temperance pamphlet. “They were dark and smoky,” Schrad writes, “with overflowing spittoons and sticky floors.”

Saloons were certainly not above reproach. Yet historians have found overwhelming evidence that they served a wide variety of social roles, not all of which were objectionable. They were places where information was exchanged and public questions debated; where immigrants created space that they could call their own; and where the poor found shelter from the streets, a free lunch to fill their bellies, and sometimes even access to prohibitively expensive technologies such as the telephone. Schrad is a political scientist, and in his introduction he clarifies that Smashing the Liquor Machine is “not a history book” but rather “a work of comparative politics.” His treatment of the saloon is one of the points where it shows.

But Schrad’s disciplinary expertise is also the source of extraordinary insight. Crisscrossing the globe and assimilating vast evidence along the way, he advances a daring argument, one that historians will be reckoning with for years to come. This book deserves a wider audience, too. It is a fun read, thanks to Schrad’s eye for colorful characters such as William “Pussyfoot” Johnson, who lost one of his eyes while on mission preaching the temperance gospel in England. During a melee between law enforcement and college students—who were, predictably, none too excited about his message—a rock hit him square in the face. He was good-natured about it afterwards, telling a group of remorseful student well-wishers who visited him in the hospital, “You had a good time; I had a good time. I have no complaints. But if you want some real fun, get into the game against the greatest enemy of the human race—drink.”

Cheers to a book that offers a new and sharper sense of that game, including what, exactly, was at stake and why so many millions once poured their lives into playing.

Heath W. Carter is associate professor of American Christianity at Princeton Theological Seminary. He is the author of Union Made: Working People and the Rise of Social Christianity in Chicago.

Prohibition: A Movement of Prudish Killjoys or Righteous Revolutionaries?

Prohibition: A Movement of Prudish Killjoys or ...