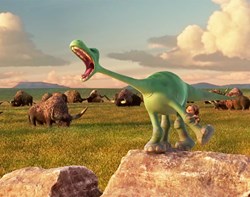 Parents at the multiplex who are looking for a movie the whole family will like probably can’t do better than The Good Dinosaur—especially given the other films opening on Thanksgiving weekend (The Danish Girl; Creed; Janis: Little Girl Blue; Victor Frankenstein) and those already playing in theaters (The Hunger Games, The Night Before, Love the Coopers, Goosebumps).

But they’ll mostly be settling. Compared to other Pixar films, The Good Dinosaur is not particularly clever in its storytelling, nor does it pack as powerful an emotional punch.

The “good dinosaur” of the title is Arlo, the youngest of three sibling dinosaurs. From the moment he is hatched, Arlo is a fearful little guy. At first Momma and Poppa (even the names are generic) think his egg is empty. Only after they tip it over and peer inside do they spot the undersized runt of the family, pressing vainly against the bottom of the shell to avoid entering the world.

Poppa is confident that Arlo just needs a little more time to “make his mark”—but clearly, he finds his son’s cowardice consternating. In a last effort, Poppa sets up a rope trap to catch a critter. All Arlo needs to do to prove his manhood is kill whatever creature is caught in the trap. That ends up being Spot, a human(ish) boy whom Arlo pities enough that cuts him loose, rather than beating his brains in.

Now the thematic stakes are set. Arlo gets separated from his family by a storm. He meets up with Spot and they form a sort of family of their own in an effort to find and return to their real families. The ensuing journey riffs on Monsters, Inc. (big scary monster scared of tiny human child) and Disney’s The Lion King (male child must overcome feelings of guilt to live up to the legacy of his father).

At this point, anyone who has seen Finding Nemo, Inside Out, The Lion King, The Aristocats, Toy Story, or The Incredible Journey can pretty much chart the rest of the story: peril will be avoided in self-contained scenarios suitable to be directly transferred to video games, supporting characters will help or hinder the hero along the way; external obstacles will be overcome to show Arlo’s courage; emotional lessons will be underscored and internalized; and maturity will be achieved by placing the welfare of another above one’s own.

Are these bad lessons? No, they are not. And The Good Dinosaur is not a bad movie.

If I think it’s lower on the scale than some of Pixar’s other entries, it’s partly because the art design feels particularly uninspired. (Only the backgrounds are beautiful; the characters populating the film have few distinctive qualities.) The 3-D takes an already muted color palette and makes the film appear even dimmer and darker, especially compared to beloved hand-drawn animated classics.

While Inside Out defended sadness in a nuanced, counter-cultural way, The Good Dinosaur treats fear with far less complexity. Fear’s just a hindrance, and it must be transcended. And since the film’s PG rating means it’s aimed at youngsters, the movie’s embrace of violence as the way you demonstrate you’ve overcome fear is disappointing, even if it is not surprising.

The end of the film at least entertains the notion that love is a stronger emotion than fear; I’m expecting at least a few complaining tweets or e-mails prooftexting 1 John 4:18. But even when the script tries to lay out a contrast between these two emotions, it only does so when considering them as motivations. Love drives Arlo past his fear, but the film never seriously explores the idea that the primary (the only?) way one demonstrates courage is by being willing to engage in violence or risk physical injury. When Arlo is allowed to make his mark, the “something big” he does can only be conceived of in terms of physical achievements—not emotional or spiritual growth. 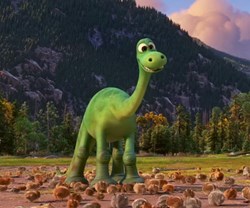 Finally: while I am on the subject, given that the ceremony of “making your mark” signals broadly one’s acceptance into the circle of family, Poppa’s insistence that “you gotta earn your mark” (emphasis added) is, I think, a problematic message to send to adolescents, who are surely a part of the film’s target audience.

None of these objections are unanswerable. I freely confess that I teared up a little at the end and chuckled once or twice before I got there. I wouldn’t exert much energy trying to steer potential viewers away from The Good Dinosaur, but to friends who asked, I would say it is one of the rare Pixar entries for which I would wait for the DVD.

Is it necessary to hold a referendum on Young Earth Creationism before recommending an animated family film? If your answer is “yes,” then The Good Dinosaur is pretty obviously not for you (or your kids). The preface affirms that dinosaurs roamed the earth sixty-five million years ago and that man arrived on the scene “millions of years later.” Given that Spot howls like a dog and spends more time crawling on all fours rather than standing upright, I suppose some Darwinian notions of the origin of the species are also implied. The villainous pterodactyls will probably strike a few viewers as a critique of religious belief. Their leader claims to have had a “relevation” (he even gets the word wrong) in “the eye of the storm” and responds in glee to new prey to kill by deifying nature and saying “the Storm provides.” A counter-argument might be that these antagonists represent a false perversion of religious belief, but as there are no counter-balancing positive representations of religious belief (except for the Hinduism in the preceding short) it would be hard for me to argue against someone who wanted to make the claim that the film as a whole tends to be anti-religious. (An afterlife might be supposed given the appearance of a deceased character, but the film clearly shows that appearance to be only in Arlo’s imagination.)

For those who have no cosmological objections to the setting, a moderate amount of action violence should also be considered. Spot hunts for food, and in one sequence bites the head off of a large grub-like creature he has offered Arlo as a gift. At least one “critter” is swallowed whole by a dinosaur, though most fight scenes consist of biting and flinging. There are two scenes of intense storms that physically imperil the characters. One character is swiftly and suddenly killed while only a few feet from Arlo, traumatizing him. Less intense but still possibly traumatic to younger viewers might be a scene in which Arlo’s brother bullies and then teases him. The parents separate the young dinosaurs, but given Poppa’s disappointments at Arlo’s cowardice, the absence of a clear rebuke of the older sibling might be seen as indifference to bullying. While no nudity is shown, there is a scene played for laughs that depicts Spot urinating behind a fallen tree.

Kenneth R. Morefield (@kenmorefield) is an Associate Professor of English at Campbell University. He is the editor of Faith and Spirituality in Masters of World Cinema, Volumes I, II, & III, and the founder of 1More Film Blog.