One of Christian music's most enduring rock bands decides to hang it up after 33 years, according to an exclusive news story at PetraRocksMyWorld.com.
May 10, 2005

For years, Petra has been dogged by rumors that they were going to call it quits. They've always denied those rumors, but not any more. 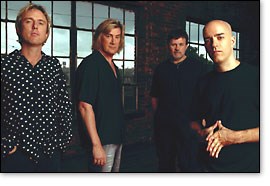 According to fansite PetraRocksMyWorld.com, one of Christian music's most decorated and enduring rock bands will officially retire later this year.

In a story titled, "It Is Finished," site editor Josh Renaud reports that founder Bob Hartman said that he and singer John Schlitt have decided "it's time to call it quits," quoting Hartman. "We don't expect to be doing any concerts after November at the latest."

Hartman also told the website that, contrary to rumors, there will be no final studio album, but that there may be one final live album.

The band will make the announcement official with a press release on their official website on Thursday, May 12.

Read the whole story here, check out our artist page on Petra here, and read our review of their last studio album here

Get the best from CT editors, delivered straight to your inbox!
More Newsletters
Tags:
None
Posted:
May 10, 2005